The Federal Reserve could be dragging us into a recession

The pundits at the Federal Reserve indicate that the agency is striving to raise interest rates to a "neutral rate." Observers believe that this would be in the 3.25 percent to 3.50 percent range. The history of the Federal Funds rate in the last 18 years does not indicate that it ever stabilized at anywhere near this rate. The average Federal Funds rate since it was first published in July 1954 has been 4.80 percent.

It would appear that the Fed simply made up this concept of a "neutral rate" since there is little evidence that it has ever existed before. Interestingly, CNBC's Andrew Ross Sorkin recently interviewed ex Fed Chairman Paul Volcker. In the interview Mr. Volcker stated "a 2 percent [inflation] target, or limit, was not in my textbook years ago. I know of no theoretical justification."

Apparently, Mr. Volcker thinks that the Fed may have made up the 2 percent number as a convenience. Others may think that the "neutral rate" concept was conceived for similar reasons.

The Federal Reserve is shrinking its balance sheet at the fastest rate recorded since it began publishing these numbers in 2002. In the past 12 months since it began shrinking, assets are down by $262 billion or 6.3 percent.

One clear result of this policy is slowing the growth in money supply. From 2000 to 2017, the growth of the nation's money supply has been 6.7 percent per year. Year-to-date, on an annualized basis, money supply is growing by 3.4 percent. This is almost half the longer term growth rate.

It seems fair to imply, that the slowing in money supply growth is due to the Fed's actions to push interest rates meaningfully higher and Federal Reserve assets meaningfully lower.

I like to look back at the current century by breaking it into three periods:

In each of these periods, the growth of money supply has exceeded the growth in nominal GDP. 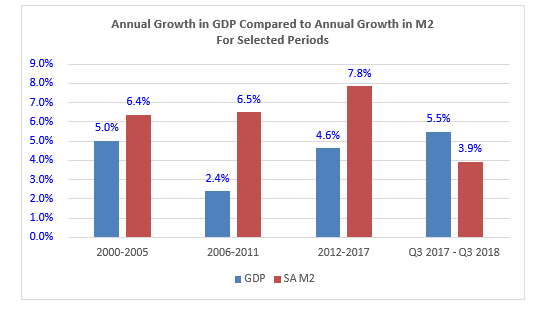 That is no longer true. In the past 12 months the growth of nominal GDP has outpaced the growth in money supply. Without getting bogged down in disputes concerning monetary theory, one should think about the numbers in this fashion:

The Fed is much too tight

For most of the past two decades, the United States has functioned on the basis of ample money supply at unusually low interest rates. Business, government, and the consumer has never felt that money was not available or that interest rates were so high as to inhibit taking desired actions. The so-called "Greenspan Put" of the 1990s was carried into the 21st century by the previous Fed.

The new Fed under ex Chair Janet Yellen and current Chair Jerome Powell is yanking us out of this environment. It has raised rates 8 times since the fourth quarter of 2015. It has increased the Fed Funds rate 21-fold. It is imposing a new rigid financial system on the economy and expecting that every sector will adjust without distress.

I do not think so. You decide.