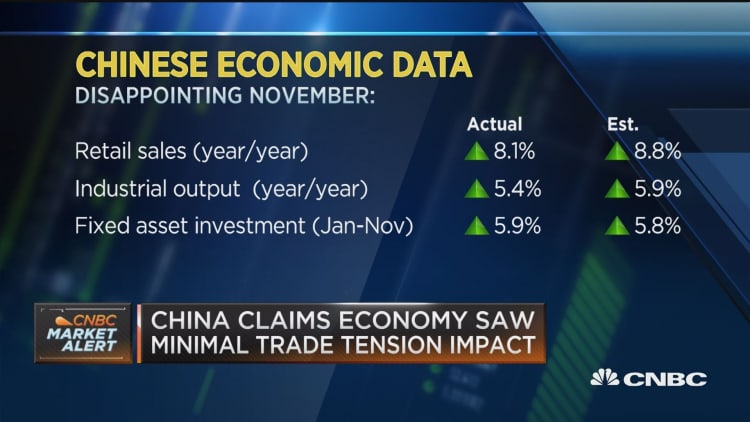 China has said it will temporarily halt its additional 25 percent tariff on vehicles made in the United States.

The relief will last for three months staring from January 1, as part of an agreed truce between Beijing and Washington.

U.S. President Donald Trump and President Xi Jinping agreed to lessen the impact of trade tariffs for the first 90 days of 2019, following a dinner in Argentina on December 1.

That brings the auto tariffs in China back down to the same level as before the point that the two countries began imposing tit-for-tat levies.

Ina note released Thursday, auto analysts at the Swiss bank UBS said trade risks continue to linger and that under their worst scenario, U.S. sales could slump by as much as 12 percent.

But UBS highlighted Ford, General Motors and Fiat Chrysler as potential winners should tariffs prohibit imports, as all three have capacity to boost domestic production.

Meanwhile, auto sales in China fell 14 percent in November over the same month in 2017, the Chinese Association of Automobile Manufacturers said Tuesday.

That slowdown, while part blamed on the trade war, is also reflective of Chinese domestic demand losing steam.

And Anna-Marie Baisden, head of autos research at Fitch Solutions told CNBC on Friday that getting a tariff deal in place may not spark fresh demand.

"Lowering tariffs might not actually make a big difference because the Chinese market is slowing anyway so even domestic brands are suffering," she said via email.

Auto stocks in Europe were among the leading losers on Friday following a steep drop in the number of new car registrations.

European car sales dropped 8.1 percent in November, falling for the third straight month after the introduction of a new emissions-testing regime in September.

The Stoxx 600 Autos sector dipped 2.2 percent following the data but has since pared losses. At 6:02 a.m. Eastern Time, the index of major European auto and auto-supplier stocks was lower by 1.4 percent.

Over the summer, auto dealers had offered incentives to empty stock before new emissions rules came into effect, according to the European Automobile Manufacturers' Association (ACEA).

"Ahead of the introduction of the new WLTP test in September, car registrations jumped by 31.2 percent in August, which has led to a drop in demand in the following months," the ACEA said in a statement Friday.

The EMEA added that car demand for November had shrunk in all of Europe's five biggest markets.

Aside from the technology hurdle that prompted a summer rush of European car registrations, one analyst at Citi told "Squawk Box Europe" on Friday that said there was also evidence of a slowdown in the consumer's desire to borrow and spend.

"It is about lending conditions. It is not only the nominal rate but what kind of coverage is the bank charging on the loan," said Luis Costa, head of CEEMEA FX and rates strategy at Citi.

Costa cautioned however that there had been no "massive tightening of lending conditions yet."

European stocks as a whole have performed poorly Friday morning as the drumbeat of weak data has continued from China. Overnight investors learned that November's retail sales in China grew at their weakest monthly pace since 2003, hurting autos and other stocks with exposure to the country.