People in these US counties are at risk of dying early 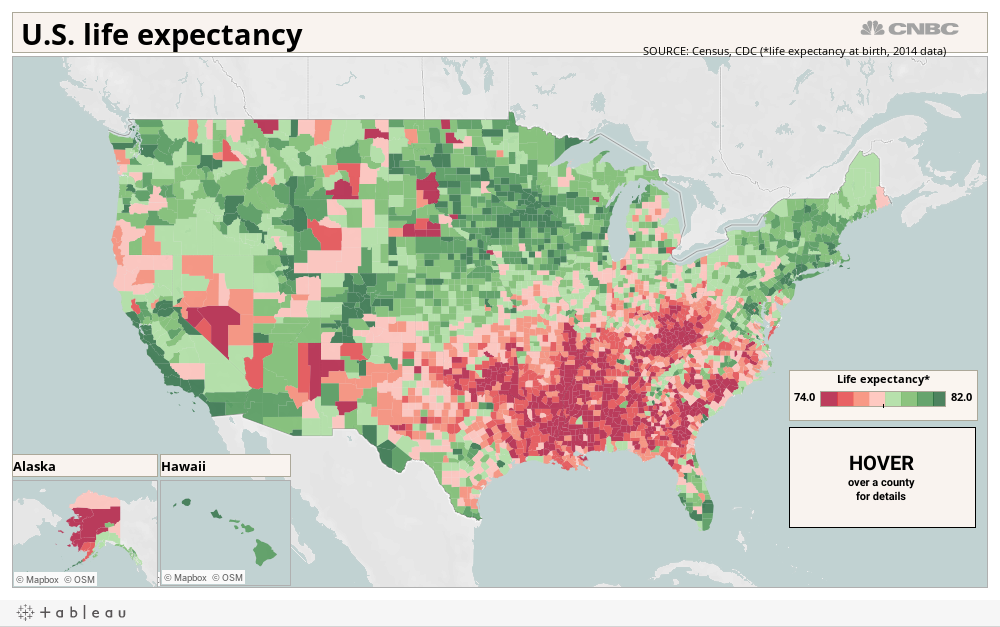 Medical advances are supposed to mean we all live longer.

In the U.S., however, the outlook isn't so clear. For the first time in 50 years, life expectancy dropped for the second year in a row.

Between 1980 and 2014, most of the country saw a boost in life expectancy, according to Amy R. Kessler, senior vice president and head of longevity risk transfer, Prudential Retirement.

Only a handful of places in the country showed shorter life expectancy during this same time.

"But given the medical advances that have occurred during the 34 years, any county that has not improved by more than 5 percent is failing to benefit adequately from the progress," Kessler said.

In January, David Blumenthal, president of the Commonwealth Fund, cited a report that found average U.S. life expectancy has slipped to 78.6 years old. Commonwealth is a nonprofit that works toward affordable, accessible health care.

WHERE AMERICANS ARE DYING YOUNGER

The Mount Rushmore State has four counties with a life expectancy far below the national average of 78.6.

A child born in Todd County could expect to live an average 68.5 years, while one born in Sioux County would have an average life span of 68.6.

In Buffalo County, the average life expectancy is 69.

In Union County, the life expectancy is 67.5.

Three counties — Owsley, Breathitt and McDowell — all have a life expectancy of 70.2.

People born in the Kusilvak Census Area have an average life expectancy of 70.8.

According to Kessler, retiree populations substantially improved their longevity over the years 1980 and 2014 because of dramatic advances in treating cardiovascular disease.

"Slow but steady progress in reducing cancer deaths among the under-85 population" also made a difference, Kessler said.

In many regions, though, people are dying younger because of a significant lack of educational and occupational opportunity, Kessler says.

It is definitely a public health issue, since the top contributing factors are substance abuse, diabetes, poor nutrition and sedentary lifestyle, Kessler said.

"It's a tale of two cities,'" Kessler said, referring to the dichotomy between healthier and sicker U.S. counties.

The U.S. is a diverse country, and access and opportunity differ greatly depending on what's available. Employer-based health care is responsible for substantial improvements in cardiovascular treatments, such as stents and cholesterol-lowering drugs, Kessler says, which can lead to dramatic gains in health status.

Some segments of the population are "experiencing very significant life expectancy gains, people who benefit from medical advances made in the last 25 years," Kessler said.

WHERE AMERICANS ARE LIVING LONGER

Colorado has the three counties — Summit, Pitkin and Eagle — with the highest life expectancy in the nation. People born in these counties have an average lifespan of 86.8, 86.5 and 85.9, respectively. San Miguel County is also on the Top 10 list, with a life expectancy of 83.7.

In Billings County, the average lifespan is 84.

Marin County has a life expectancy of 83.8.

Fairfax County, including the city of Fairfax, have a life expectancy of 83.7.

Alaska
Two areas — Aleutians West Census Area and Aleutians East Borough — have a life expectancy above the national average: Both average out at 83.7.

People in Presidio County have a life expectancy of 83.7.

At the other end of the spectrum, there are people who don't have access to employer-based health care and may be part of the reason for the drop in longevity, Kessler explained.

"A vast swath of the U.S. population is under-insured," Kessler said.

In these regions, people are dying at younger ages from suicide and opioid deaths, which are highest in rural areas. In those same areas, life expectancy shows the impact of obesity, diabetes, sedentary lifestyle, poor nutrition and lack of access to health care.

"More affluent segments of the population with access to high-quality health care have a lower incidence of these challenges and more opportunity to benefit from lifestyle advances in nutrition and exercise that are available to help people stay healthy longer," Kessler said.

More in Personal Finance:
5 things to do in your 30s to save your financial life
Want to be rich someday? Do these three things
Rake in extra cash with a successful side hustle