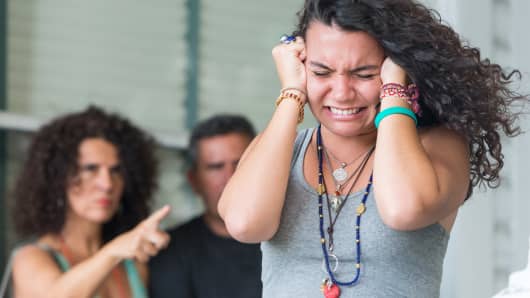 My son will turn 13 next month, and he is already exhibiting signs that he is becoming a teenager.

While it's not all bad, one characteristic stands above them all. He tends to overreact to normal daily happenings. As parents, we have all experienced this statement: "Mom, leave me alone, I am in the middle of a crisis!"

Of course, crisis for a teenager is most often just their word for plain life. But, like a teen, the markets are becoming too emotional and quick to escalate the importance of minor economic or political events. There seems to be little cause-and-effect logic to the now daily market roller coaster. It's like the markets are saying: "Investors, we are in the middle of a crisis!"

Just like many teenagers, the markets have been moody and impulsive and has made split-second decisions based on emotions. Markets and teenagers both seem to live in perpetual stress.

The S&P 500 Index closed up or down more than 2 percent on 15 trading days in 2018 — that's more than any year since 2011. It's also quite a change from 2017, which had no trading days with 2 percent moves. 2019 is shaping up to be more of the same. Just last week, the market opened more than 400 points down, only to change directions many times throughout the day and end up mildly positive.

All these ups and downs sends the important message that investors are worried about where stocks are going. To that point, CNNMoney's Fear and Greed Index, which measures seven indicators of market sentiment, is currently registering levels of "Extreme Fear" like those recorded in 2008. When stocks fall out of favor and fear is high, they decline by an unreasonable amount, which is what we are seeing today.

More from Personal Finance:
5 ways to combat market-driven stress
This job challenge should scare older workers
Time to check your tax withholding for 2019

Is this irrational anxiety? Maybe so, but there is some very rational science behind why people are so afraid of losing money. Scientists pinpointed a small structure in the brain known as the amygdala that is responsible for an intense fear of losing money.

Although we have evolved as humans, our amygdala keeps us beholden to the ancient fight-or-flight response before other parts of our brain can overrule it, making it hard to think clearly.

Each time our brains see money disappear as stock prices fall, this part of the brain tells us to sell the stocks first and ask questions later. What scientist call the "Amygdala Hijack" causes otherwise sane people do crazy things with their money.

Investors are paying too much attention to short-term negative news, causing repeated panic circuits in their brains. Evolving headlines for some key financial issues, including tightening central bank policy, signs of slowing in certain parts of the world, a potential trade war with China and the unrest in Washington politics, continue to play out with more drama than the most recent season of "The Real Housewives of New Jersey."

It's key for investors to avoid dwelling on the headlines that change each day and the negative short-term stock blips. If you follow the changes in your portfolio daily, you will make yourself crazy and most likely will need to start taking some type of high blood pressure medication.

"Just as those unpredictable teenage mood swings will decline as the child ages, the market will rebound. Wait — it does get better."

Something that is not quite highlighted in all this doomsday talk is that many key factors look positive for 2019. To that point, gross domestic product growth forecast for 2020 remains at a robust 2 percent and 2021 is forecasted to see a healthy 1.8 percent for the U.S. Corporate earnings are expected to continue to rise in 2019 and the new political issues arising daily will eventually get resolved. We see the market as higher at the end of 2019, and most market experts agree.

Even if you are not convinced, the odds of a positive market are in your favor. Even if the market is volatile, it tends to be positive in a given year. Of course, it doesn't rise every year but, over time, the S&P 500 has gone up in about 70 percent of years. Reading that statistic should be more comforting than a cozy blanket on a cold winter's night.

The returns from investing do not necessarily show up every day, every week, every month or even every year. But the longer you stay invested, the more likely you are to capture them.

Rest assured that even when prices are falling in the market, people are still buying. The market is doing its job, and the rewards will be there if you remain a disciplined long-term investor. What your investments did this year is far less important than what they'll do over the next decade … or two, or three.

Just as those unpredictable teenage mood swings will decline as the child ages, the market will rebound. Wait — it does get better. So stay focused on those long-term financial goals you've set.

— By Stacy Francis, president and CEO of Francis Financial

Stacy FrancisCNBC Contributor and president and CEO of Francis Financial