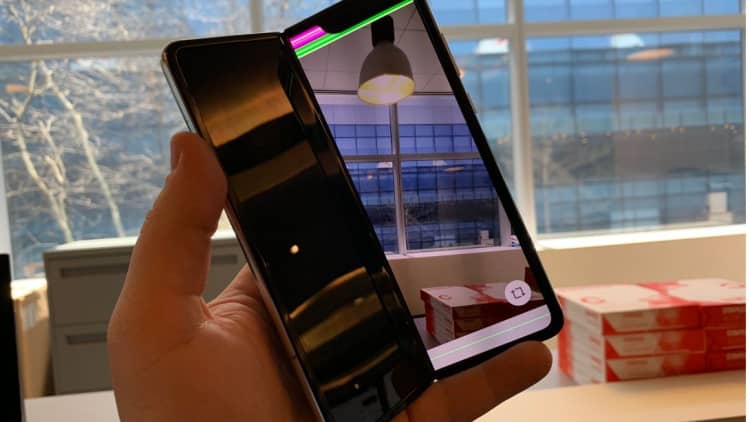 watch now
VIDEO0:3300:33
We tried to review the new Samsung Galaxy Fold — but it broke after two days
Tech Guide

Samsung's $1,980 Galaxy Fold phone is breaking for some users after a day or two of use. A review unit given to CNBC by Samsung is also completely unusable after just two days of use.

The phone has only been given to gadget reviewers, but some of the screens appear to be disconnecting and permanently flashing on or off.

The Verge's Dieter Bohn posted earlier on Wednesday that his phone appears to have a defective hinge with a "small bulge" that he can feel that's causing the screen to "slightly distort." Bloomberg's Mark Gurman says his "review unit is completely broken just two days in," but noted he accidentally removed a protective film on the screen.

YouTube tech reviewer Marques Brownlee also removed the film and experienced a broken display. A Samsung spokesperson had warned on Wednesday not to remove the protective layer.

However, CNBC didn't remove that layer, and our screen is now also failing to work properly. When opened, the left side of the flexible display, which makes up a large 7.3-inch screen, flickers consistently. It looks like this:

Samsung started taking pre-orders for the Galaxy Fold last weekend, but quickly ran out of availability, suggesting supply is constrained at least until its retail launch on April 26. Folks who ordered it might want to reconsider at this point.

A limited number of early Galaxy Fold samples were provided to media for review. We have received a few reports regarding the main display on the samples provided. We will thoroughly inspect these units in person to determine the cause of the matter.

Separately, a few reviewers reported having removed the top layer of the display causing damage to the screen. The main display on the Galaxy Fold features a top protective layer, which is part of the display structure designed to protect the screen from unintended scratches. Removing the protective layer or adding adhesives to the main display may cause damage. We will ensure this information is clearly delivered to our customers.