China's 'nuclear option' in the trade war could be a dud

Hiram Johnson, a U.S. senator speaking in 1916 against America's entry into World War I, supposedly said, "The first casualty when war comes is truth." Among its early casualties, the unfolding trade war has claimed objectivity.

Trade-war hysteria has fueled warnings that China could weaponize its massive holdings of U.S. Treasuries by dumping them on the market. This "nuclear option," the Cassandras cry, would cause a severe spike in U.S. interest rates, tank America's stock market and freeze its credit market, pushing the U.S. into recession and impeding the re-election of you know who.

Let's take a step back from trade-war sensationalism and make an objective appraisal of the so-called nuclear option. In my view, such an action would inflict serious damage to the Chinese economy in short order – while leaving the U.S. relatively unscathed, at least in the near term. Over the longer term, China would suffer the discredit of the yuan, dooming its quest to achieve foreign-exchange reserve status for its currency and scaring away needed foreign investment.

The reasons why the nuclear option would backfire stem from what let's call "the mechanics of the basket."

Global trade and financial settlements are conducted through the currencies of the world. The vast majority of international settlements – including commodity contracts and external debt of sovereign and corporate issuers – are denominated in U.S. dollars, the world's reserve currency. Central banks must maintain stockpiles, or reserves, of dollars to defend their currencies against excessive weakness.

China runs a managed floating exchange rate of its yuan vis-à-vis a basket of foreign currencies. The U.S. dollar forms a large component of the basket. In order to keep the yuan in line with the basket, Chinese authorities must have dollars. According to the U.S. Treasury, China held $1.1 trillion in Treasuries as of March 31, the majority of which were held as reserves to collateralize trade and to capitalize China's highly leveraged banking system.

For the sake of argument, let's assume that Beijing exercises the nuclear option: China abruptly sells all its Treasuries and converts the proceeds into another asset such as gold or government bonds from another country. How might the nuclear option play out? By irradiating China.

If the yuan came under pressure and needed support, Chinese authorities would need to intervene in the currency market by selling dollars, but to do so, they must first buy dollars from the sale of these other assets. This creates several problems.

In the case of holdings in foreign government bonds, the Chinese would need to sell the bonds, then translate the foreign currency into dollars. This could put further upward pressure on the greenback versus the yuan.

A yuan depreciation spiral could be just the start of China's problems. The selling of the foreign assets, absent increased demand for them, would impair their value. This could create a feedback loop whereby foreign investors would sell the same assets. Such a decline in value of China's reserve assets would raise doubts about the value of the country's remaining reserve stock.

Meanwhile, the U.S. would not sit on its hands in the event of pricing dislocations of the Treasury market. The Federal Reserve would likely buy up Treasuries in another round of quantitative easing (QE), just as it did in response to the 2008 financial crisis. During its recent effort to reverse QE, the Fed has already shed $600 billion from its balance sheet. Jerome Powell no doubt would be loath to resume QE-sized asset purchases, but the Fed has the capacity to do so.

A sell-off would tighten financial conditions, which would put downward pressure on global risk markets. That includes Chinese assets and ultimately the yuan. To stem yuan depreciation, China would be compelled to allow domestic interest rates to rise. The higher borrowing costs would reduce credit availability and slow economic activity. Those headwinds would come at a time when Beijing is trying to prop up domestic employment and attract foreign investment.

In short, Beijing has no nuclear option in the Treasury market. Let's return to a realistic assessment of China's reserve requirements.

Not only is China the world's second-largest economy, the country is the world's largest exporter and the world's second-largest importer. Beijing also is trying to attract capital into Chinese markets. These facts of life make imperative the holding of substantial foreign reserves, both to manage the exchange rates of the yuan against hard currencies, and to ensure hard currency-denominated settlements with trading partners and foreign investors.

Furthermore, China arguably needs to maintain, if not increase, its stockpile of hard-currency assets. Total Chinese foreign exchange reserves currently are reported at $3.1 trillion, according to the International Monetary Fund (IMF). This is down from $4 trillion as recently as June 2014 after weakness in the yuan compelled Beijing to sell part of those holdings and buy yuan to prop up the currency. Market estimates for reserve adequacy in China vary dramatically. The estimates range between $2.2 billion and $2.8 billion. China already is near the upper bound of that minimum. 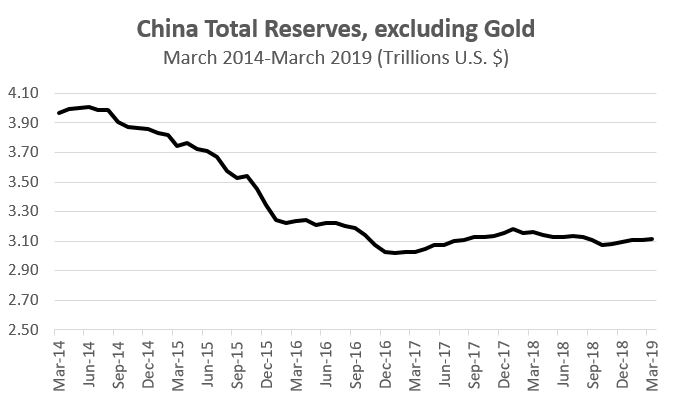 China cannot replenish its dollar reserves as swiftly as it could in the past. As I noted in a commentary for the Financial Times, the quarter-century era of large surpluses in China's current account is over. The future of China's current account will be one of small surpluses or even periodic deficits, putting a limit to how quickly it can "passively" accumulate foreign currencies such as the dollar.

What can China do?

This is not to be complacent regarding the trade war. Beijing is far from exhausting its arsenal. Beijing can escalate the tariff gambit. It also can target tariffs to apply maximum political pressure on the White House. Indeed, it has already taken aim at agricultural products, spreading the pain to states that supported Donald Trump in the 2016 general election. (Xi Jinping, China's "president for life," has no electoral college to consider in his domestic political calculus.)

Beijing also could allow its currency to push above the redline of seven yuan per dollar, a move which could weaken risk assets, including U.S. stocks. Finally, Xi might even hold a real nuclear option in the trade war: an embargo of rare-earth mineral exports, vital to U.S. defense.

I could cite more reasons to worry about the trade war, but China's Treasury holdings are not among them.

This article contains the current opinions of the author, but not necessarily those of DoubleLine. Such opinions are subject to change without notice. This article has been distributed for educational purposes only and should not be considered as investment advice or a recommendation of any particular security, strategy or investment product. Information contained herein has been obtained from sources believed to be reliable, but not guaranteed.