Skip Navigation
Fired Up2 'downsides' of early retirement, according to a self-made millionaire
Ryan Ermey
SuccessWant to sound and feel more confident? Ditch these 11 phrases from your...
Kathy and Ross Petras, Contributors
MoneyThis mom makes $760K a year in passive income—and lives on a sailboat: 'I work...
Michelle Schroeder-Gardner, Contributor
Criene | Twenty20

What makes us happy in life? It seems like a straightforward question, but it's one that we find ourselves asking every day.

"Winning a $20 million lottery ticket won't make you happier. Research has shown that after one year, lottery winners go back to their baseline. Some are even less happy," he said in a TED Talk earlier this year.

"A few probably spent their money on a big mansion or a fancy car. Maybe they spent it all on gambling. But even so, at the end of three months, it's just a house, it's just a nice car. You get used to it," says Chopra, who has written a number of books about happiness. He calls this phenomenon hedonic adaptation, which is a concept that refers to people's general tendency to return to a set level of happiness despite life's ups and downs.

In the talk, Chopra explains the four things that have been scientifically linked to happiness:

Developing a close bond with people we trust and confide in is essential to our overall well-being. "Choose your friends wisely and celebrate everything small and good with them," Chopra says.

Many others have stressed the importance of having deep and meaningful relationships. "The world is suffering from an epidemic of loneliness," former U.S. Surgeon General Vivek Murthy wrote in a 2017 Harvard Business Review article. "If we cannot rebuild strong, authentic social connections, we will continue to splinter apart — in the workplace and in society." 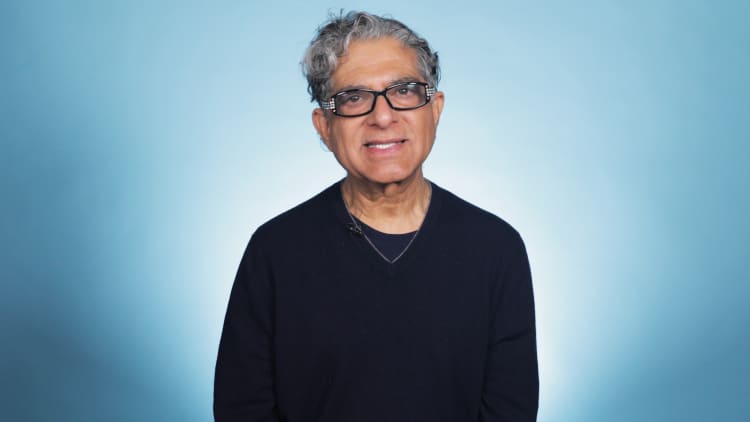 VIDEO1:2501:25
Deepak Chopra: This is the best way to manage stress
Make It

Researchers have also warned that "loneliness and social isolation can be as damaging to health as smoking 15 cigarettes a day," whereas friendships can "reduce the risk of mortality or developing certain diseases and can speed recovery in those who fall ill."

"The ability to forgive frees you from the burdens of hate and other unhealthy emotions that can negatively impact your happiness quotient," says Chopra.

He cites Nelson Mandela as a hero who truly mastered the art of forgiveness. In 1990, when the legendary freedom fighter emerged from his 27 years of prison, he was asked whether he had any resentment toward his captors.

"I have no bitterness, I have no resentment. Resentment is like drinking poison and then hoping it will kill your enemies," Mandela responded.

Anyone who's ever felt they've been mistreated (most likely each and every one of us) knows that the act of forgiving can be challenging. But Karen Swartz, director of the Mood Disorders Adult Consultation Clinic at The Johns Hopkins Hospital, says that "making a conscious decision to let go of negative feelings whether the person deserves it or not" can lead to more than just increased happiness.

Resentment is like drinking poison and then hoping it will kill your enemies.
Nelson Mandela

Studies have found that it can also lower the risk of heart attack, improve cholesterol levels and reduce blood pressure, anxiety, depression and stress.

Chopra says that getting involved with charities and donating money to help others is one of the most fulfilling ways to spend your time and money. Researchers have even suggested that people who volunteer experience greater happiness, higher self-esteem and a lower mortality rate.

A study from the University of Chicago and Northwestern University found that giving, rather than receiving, leads to long-term happiness. In one experiment, 96 participants were given $5 every day for five days — with the option to either spend it on themselves or on others.

"Everyone started off with similar levels of self-reported happiness," the researchers wrote. "Those who spent money on themselves reported a steady decline in happiness over the five-day period. But happiness didn't seem to fade for those who gave their money to someone else."

"There's a wonderful anonymous quote that goes, 'If you don't know the language of gratitude, you'll never be on speaking terms with happiness,'" Chopra tells the audience.

Practicing gratitude can be as simple as saying "I'm grateful" at least once a day. In fact, one study from the American Psychological Association found that doing so can help people savor positive experiences, cope with stressful circumstances and strengthen relationships.

Happiness flows not from physical or external conditions, such as bodily pleasures or wealth and power, but from living a life that’s right for your soul, your deepest good.
Socrates

Kyle Young is a freelance creative writer and author of "Quitterproof: The 5 Beliefs of Highly Successful People." He has also written for Fast Company and Harvard Business Review. 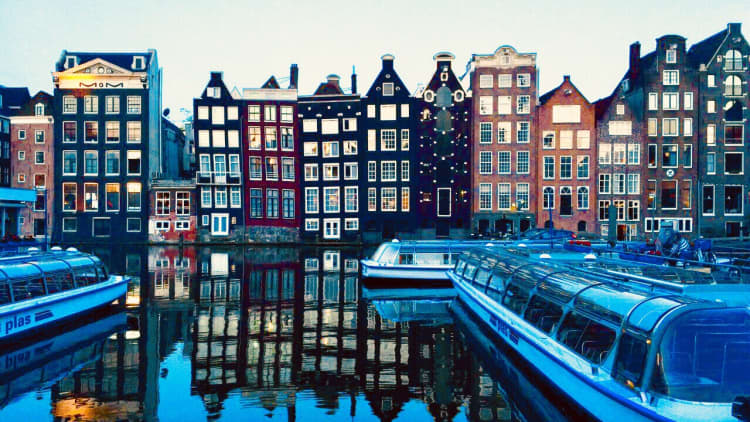 VIDEO1:0801:08
These are the best ways to travel the world for super cheap
Make It