Always see the glass as half-empty? Here's yet another thing for you to worry about: It can be damaging to your health.

Sure, having a pessimistic attitude can be motivating and constructive. And situations involving money, relationships, work and current events can easily lead to stress.

But when you're constantly expecting the worst — especially about the little things — the effects can become more pronounced over time until, eventually, they become too distressing to ignore.

Here are the harmful side effects of being a pessimist:

It's late past 12 a.m. and you're trying to fall asleep, but your brain is running through a list of all your concerns on repeat. If you're prone to excessive worrying, you might be familiar with this scene.

Anticipating the consequences of forgetting to reply to an email or being unprepared for a meeting that's weeks away can prevent you from getting at least seven hours of sleep.

One quick solution is to "focus on an imaginary scenario, which is unimportant but has a story, thereby diverting your attention," sleep expert Dr. Neil Stanley told Good Housekeeping. He also suggested avoiding stressful situations like checking emails or going through bills right before bedtime.

Another simple trick, according to a report published in Harvard Women's Health Watch, is to turn your clock in a different direction so you can't see it; watching the sleepless minutes pass may cause more stress, thus making it harder to shut your eyes.

According to a 2016 study, having a pessimistic attitude can increase the risk for death from heart disease, while an optimistic outlook may have no effect at all.

At the start of the study, 2,267 men and women between the ages of 52 and 76 were presented with six statements — either positive or negative — and asked to rate how well the statements applied to them. The participants' cholesterol levels, blood pressure, glucose readings and other health and behavioral characteristics were also recorded.

During 11 years of follow-up, 122 people died from coronary heart disease (CHD). "Those who died from CHD were significantly more pessimistic at baseline than the others," the researchers noted.

"Your personality traits can make physical health worse," Dr. Mikko Pankalainen, the study's lead author and a psychiatrist at the Paijat-Hame Central Hospital in Finland, told The New York Times. "If you're pessimistic and have health issues, it's even more important to take care of your physical health."

Eating a healthy, balanced diet, exercising, reducing alcohol consumption and giving up smoking may help reduce your risk of CHD, according to the National Health Service.

When you're constantly expecting the worst, your brain releases more cortisol, the primary stress hormone.

"High cortisol levels secreted due to stress can reduce the volume of the brain," Dr. Janette Nesheiwat, a board-certified family and emergency medicine doctor, told Healthline.

Indeed, several studies have found that stress can kill new neurons in the brain's hippocampus, a region of the brain heavily associated with memory, emotion and learning.

An increase of oxygen flow can help calm regions of the brain that get activated by stress, says stress expert Kathleen Hall. One of the most effective ways to do that is through exercising.

If you're too busy to hit the gym, Hall suggests keeping a jump rope in your office and doing a few minutes of exercise when you start to feel stressed or worried.

When it comes to being a pessimist, it can be a case of mind over matter. We've found that taking a moment to do some deep breathing exercises or at least 15 minutes of meditation can help relieve stress.

You can also embrace the power of detaching yourself from whatever it is that you're worried about. When you choose to let go of the source of your stress, you may enjoy the restoration of inner peace.

Treating depression may not guarantee a longer life. But it will certainly make it a happier one.
Richard A. Friedman
director, Psychopharmacology Clinic at Weill Cornell Medical Center

While is little scientific evidence that pessimism can be "treated," the worst thing to do is to not take any action.

"Pessimists have enough to fret about without worrying that their own temperament will doom them to a short life," Richard A. Friedman, a director at the Weill Cornell Medical Center, wrote in a New York Times article. "If pessimists should worry about anything, though, it's that they may have an undiagnosed — and treatable — depression."

Deepak Chopra is the co-author of "The Healing Self," founder of The Chopra Foundation and co-founder of Jiyo and The Chopra Center for Wellbeing. Follow him on Facebook.

Kabir Sehgal is a New York Times best-selling author. He is a former vice president at JPMorgan Chase, multi-Grammy Award winner and U.S. Navy veteran. Chopra and Sehgal are the co-creators of Home: Where Everyone Is Welcome. 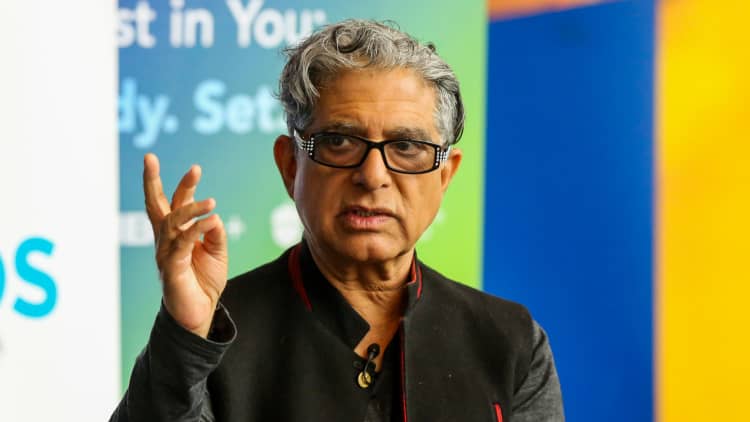 VIDEO1:1101:11
These tips will help you overcome work stress to get some sleep
Make It