President Donald Trump met with CEOs from Google, Broadcom and other technology companies on Monday to discuss trade practices and national security issues.

The White House said in a press release that the meeting was "constructive." One topic on the docket was Huawei and the security concerns around use of the Chinese company's equipment. The discussion came as tech companies face the potential of increased regulation following a week of hearings on Capitol Hill.

The seven CEOs from the tech and telecom industries were Sanjay Mehrotra of Micron, Stephen Milligan of Western Digital, Steven Mollenkopf of Qualcomm, Sundar Pichai of Google, Chuck Robbins of Cisco, Robert Swan of Intel and Hock Tan of Broadcom.

The executives requested "timely licensing decisions" from the Department of Commerce regarding Huawei, and the President agreed, according to the White House. Huawei has a tense relationship with the U.S. government after Washington banned a wide range of sales to the Chinese company earlier this year, citing national security concerns. However, it later softened the terms.

Intel and Micron are the only companies so far to respond to CNBC's requests for comment regarding Monday's session:

"We regularly engage with the Administration on issues important to Intel and our industry," a spokesperson said. "We appreciate joining our peers attending today's White House economic meeting and sharing Intel's perspective on economic issues, including how the current trade situation with China impacts the critical US semiconductor industry."

A Micron spokesperson said Mehrotra was invited to meet with Trump and members of the National Economic Council to "discuss topics that affect America's technology development."

"We believe strategic technology investment and policies that ensure open and fair trade on a level playing field are essential to ongoing U.S. technology leadership as well as economic growth throughout the world," the spokesperson said in a statement.

Trump has a rocky relationship with Silicon Valley. He hosted tech leaders in a 2017 meeting, which grabbed headlines for the dour facial expressions of several participants, and then again last December, where discussions revolved around Chinese tariffs, among other issues.

The president has personally gone after Amazon CEO Jeff Bezos on a number of occasions and has been critical of Facebook and Google for, in his view, their anti-conservative bias. Last year, the Trump administration blocked Broadcom's attempt to acquire Qualcomm, citing national security concerns, because Broadcom at the time was headquartered in Singapore. 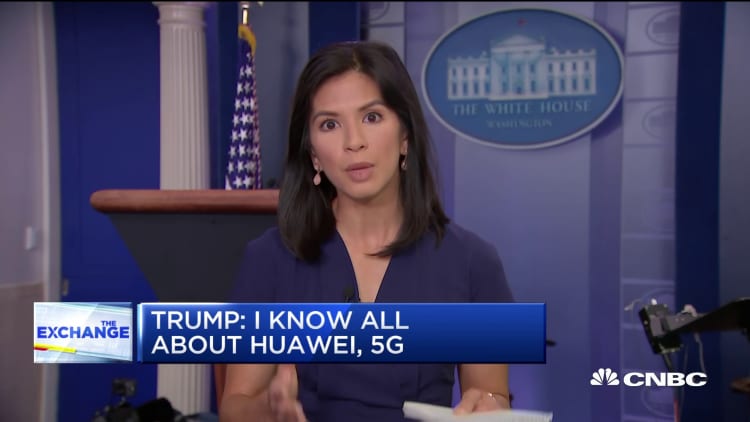 watch now
VIDEO1:5001:50
Trump: We will have to find out if Huawei worked with North Korea
The Exchange