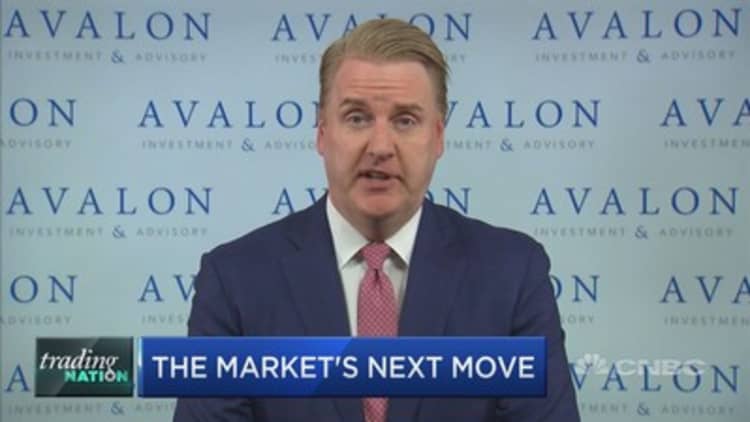 watch now
VIDEO1:3201:32
This $3.4 trillion sitting on sidelines could be market's next catalyst
Trading Nation

Stocks are in search of their next catalyst, holding just 1% below records.

"We're at about $3.4 trillion in money market assets. Put in that perspective, we got up to $3.9 trillion during the worst of the financial crisis, then it fell to about $2.6 trillion, so obviously it's been moving up," Stone said on CNBC's "Trading Nation" on Monday.

Stone says the shuffle of cash into money markets in recent years makes sense — stocks had been bid up to record high levels again, and the Federal Reserve until 2018 had been raising rates, making for decent yield in Treasuries.

However, with the Fed on a more dovish path and bond yields holding near lows, Stone sees the potential for funds to shift out of money markets such as mutual funds and into equities again.

"With all that dry powder out there, the catalyst is that yield is going to start to fall away. We've already seen yield on short term, fixed income fall," said Stone. "People will be looking for yield and looking for a return somewhere. And I think that's the place where if they're less concerned about a recession and the global slowdown, that could be a spot where you get money going into stocks."

More than half of the S&P 500 yields more than the 10-year Treasury note.

As for fears of a recession, Stone says the likelihood is low, with one economic pillar holding strong in the U.S. — the consumer.

"We like consumer discretionary still because we think the U.S. consumer is the key. It's the reason why the U.S. economy continues to hold together, and we don't see a reason why that's going to fall apart really soon," said Stone.

The consumer discretionary sector has added more than 20% this year, led by gains in Chipotle, Target and Dollar General.