On Thursday, Lynda and Stewart Resnick, co-owners of The Wonderful Company, announced a $750 million pledge to Caltech — comprised of a $400 million gift and a $350 million sponsored research agreement — in support of the school's environmental sustainability initiatives.

The couple's gift is the second-largest gift to an academic institution in U.S. history (behind Michael Bloomberg's 2018 $1.8 billion gift to Johns Hopkins University) and the largest gift geared towards combating climate change ever.

"We've always as a company and as individuals given back, particularly in the areas that we do business," Stewart tells CNBC Make It, mentioning the charitable work the couple has done in California's Central Valley and Los Angeles. "My thought was that we see climate change. We're in the ultimate sustainability business, which is farming, and we see the changes already. And if we're going to be helpful, if we can't solve the sustainability problem, then the other problems don't mean anything."

In 2009, the Resnicks, whose company grows and sells produce like pistachios and mandarins and produces consumer brands like POM Wonderful and FIJI Water, gave $20 million to the school to create the Resnick Sustainability Institute (RSI), which is dedicated to energy sustainability research. In the decade since, they've given an additional $18 million to the RSI.

The $750 million total of their most recent gift, which will be used to support solar science, climate science, energy, biofuels, decomposable plastics, water and environmental resources, and ecology and biosphere engineering research at Caltech, is significantly larger than most college endowments. According to U.S. News, the median college endowment is around $65.1 million. The National Center for Education Statistics estimates that Caltech has the 35th biggest college endowment in the country, worth roughly $2.2 billion.

The Wonderful Company is privately held. Forbes estimates that the company is worth $4.2 billion and that the Resnicks are worth $9 billion.

"I have been fortunate enough to be able to make the money and I feel comfortable with how to do that. Giving away the money is a little harder because I started with nothing," says Stewart who began his entrepreneurial career when he started a janitorial business while in college at UCLA. "We could use that money to maybe make more money, but this climate change thing ain't waiting for anybody."

In a statement from The Wonderful Company, school officials and researchers stress that the gift's size is commensurate to the size of the problem at hand.

"Sustainability is the challenge of our times," says Thomas Rosenbaum, Caltech President. "Stewart and Lynda Resnick's generosity and vision will permit Caltech to tackle issues of water, energy, food, and waste in a world confronting rapid climate change. The Resnick Sustainability Institute will now be able to mount efforts at scale, letting researchers across campus follow their imaginations and translate fundamental discovery into technologies that dramatically advance solutions to society's most pressing problems."

"The risks we face due to climate change present daunting challenges. The discoveries, inventions and innovations that will be spanned by this incredible pledge will be transformative," says Steven Chu, co-winner of the 1997 Nobel Prize in Physics and former Secretary of Energy under President Barack Obama. "The generosity of Stewart and Lynda Resnick is a lasting commitment for the future well-being of our children, our grandchildren and our planet."

"This research will no doubt change the world," says Dr. M. Sanjayan, chief executive officer of Conservation International. "It may even save the world. It's that profound."

Resnick's gift will also fund the building of a 75,000-square-foot building named as the Resnick Sustainability Resource Center which will house the school's sustainability research.

The gift is part of the couple's complex relationship with environmental sustainability activists. The couple are early investors in the Kern Water Bank, giving them unrivaled access to banked water. Since then, The Kern Water Bank and Westside Mutual Water, a company set up to control the Resnicks' water, have been sued several times by environmental non-profits who claim the Resnicks have disproportionate control of water supplies in California's Central Valley.

"We get criticized for our banking of water. We built a big bank that we paid money for, to build it and build the state infrastructure for. And what we're able to do there is when we have heavy rainfall, we're able to bank that water, put it in the ground, which otherwise would just go out to sea and we'd get no value," says Stewart. "So we're able to take that water, bank it, and then we're able to use that water on crops that create both value in export and jobs.

"We get criticized for our use of water. What people don't understand is the water that we've actually banked would have done no one any good."

As for convincing climate change deniers to take environmental sustainability more seriously, Stewart says he isn't interested. "I don't think I can convince them if they're not convinced by the facts," he says, "so I have to do what I think is right." 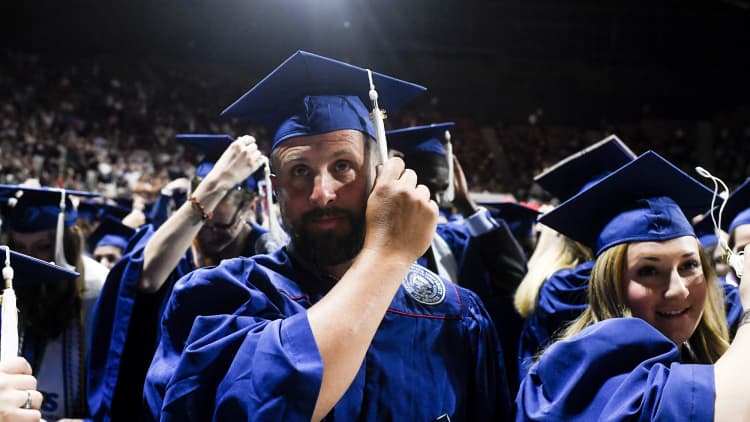 VIDEO4:1604:16
Michael Horn: How to tell if your degree is worth the money
Definitive Guide to College