SONOMA, Calif. — As ash settles from the recent wildfires in one of the world's most recognizable wine regions, the battle-tested vintners now face another problem – discouraged tourists.

The wildfires in California's Sonoma County are among the largest and most intense in the state's history. Fortunately for the wineries, the fires came at the close of the harvest this year and most of the grapes were saved. But that might not matter so much.

"The real damage from the fires isn't on the harvest, it's on the economy," said Rob McMillan, executive vice president and founder of Silicon Valley Bank's wine division. "From a tourism standpoint, people will choose not to come to the vineyards."

The Kincade Fire, which ignited on October 23, scorched nearly 78,000 acres within Sonoma and raged for two weeks. Sonoma, the relaxed and straightforward sister to Napa, is home to more than 400 wineries with nearly 65,000 sun-kissed acres of grape vines.

Though the majority of Sonoma's tangled vines went unscathed by the flames, winemakers are questioning how tourists will react to an increasingly fire-prone region. The overall damage from the Kincade Fire could end up costing $10.6 billion, according to an estimate last month. However, it's not clear what kind of impact it might yet have on the wine tourism industry.

In 2018, California's 4,700 wineries drew nearly 24 million visitors, employed 325,000 people locally and generated nearly $58 billion for the state, according to figures from the Wine Institute. The Golden State also makes 81% of all U.S. wine, and is the world's fourth-biggest wine producer.

But for vintners, dealing with wildfires is becoming an unfortunate reality. Fires erupting in California will grow worse as climate change drives more extreme weather events across the country.

Caroline Beteta, president and CEO of Visit California, a nonprofit organization focused on tourism, said that only one winery burned out of the 825 wineries between Napa and Sonoma.

"It's hard for communities to go through this and certainly, there is a disruption but afterward, they're like, 'Okay we are open for business and we are back,'" Beteta said.

Global warming will lead to more wildfires across the country as hotter temperatures dangerously dry vegetation and set them on fire. After three straight record-breaking fires, winemakers are wondering how to adapt in a state primed to burn.

"Of course we have lost some revenue here, no one is coming out to visit the tasting rooms," said Michael Haney, executive director of Sonoma County Vintners. He added that the 2017 wildfires had a "definite impact" on wine tourism. The insurance industry expected to pay out $11.8 billion in claims to northern California fire victims for 2017 blazes.

"But one of the big things that we want to reiterate to everybody is that this most recent fire was a small section of Sonoma County," he said.

Firefighters look on as a structure burns during the Kincade Fire in California on October 29, 2019.
Philip Pacheco | AFP | Getty Images

Stacked against the 17 separate fires in 2017, the Kincade Fire burned less than 380 structures and killed no one. But two years prior, the wildfires decimated the area, killing 22 people and destroying more than 5,600 structures.

Industry experts say that the real damage will be to tourism, and wineries must prepare for more wildfire events.

"When we're going through fire evacuations, the workers are impacted," said Silicon Valley Bank's McMillan. "They aren't there at the wineries to take care of hospitality, they're not at the hotels, restaurants or grocery stores."

Some wineries are purchasing more back-up generators and prioritizing disaster planning for their employees.

Pacific Gas & Electric, which has been blamed for in the last several years for some of California's most destructive fires, is implementing rolling blackouts over the next 10 years to protect dry landscapes from power lines that could overheat and spark the fires. This could pose a significant challenge to wineries and other businesses.

"When you have these fire events, it's a loss of tourism money, a loss of hotel money — it's substantial," McMillan said.

"From a PR standpoint, there's a fear over what it means when you have a wine country name in the media, and all you see is flames." 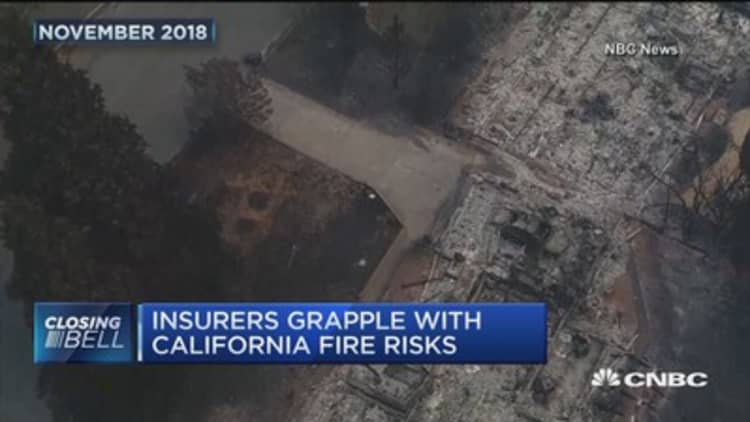