China's ambition to become the world leader in technology — whether it's 5G, blockchain or artificial intelligence — could be more urgent now that its economy is slowing and it's embroiled in a protracted tariff war with the U.S.

Trade tensions between U.S. and China have prompted experts to speak of "decoupling" between the countries, referring to an increased disconnect between the world's two largest economies.

The "Chinese drive towards self-sufficiency" has accelerated over the past year as a result of the "decoupling," said Ben Harburg, managing partner of Beijing-based venture capital firm MSA Capital, at CNBC's East Tech West conference in the Nansha district of Guangzhou in China.

The theme was prevalent throughout the conference as experts discussed China's support for blockchain, financial technology and 5G. Other tech ambitions include Beijing's stated goal of becoming the world leader in artificial intelligence by 2030, as well as its drive toward launching its own virtual currency.

The technology rivalry between the U.S. and China has centered around the development of next generation mobile services 5G, with Chinese tech giant Huawei in particular focus.

Huawei, a key developer of super-fast 5G technology, was blacklisted by the U.S. government in May. Washington has cited security concerns over Huawei's equipment, alleging that they could provide a backdoor for the Chinese government to spy on the United States. The Chinese tech giant has consistently denied those claims.

Huawei unveiled a new 5G processor for its mobile devices in September, highlighting the company's ambitions to take control of its supply chain amid political pressure from the U.S.

"Our products are able to be shipped without the reliance on the U.S. components and chips," Huawei's Chairman Liang Hua told CNBC's Geoff Cutmore at the conference.

China is on track to becoming the biggest 5G market in the world.

Earlier this month, China turned on its 5G mobile networks ahead of schedule. It announced days later that it was rolling out research and development for 6G networks — even though 5G is still at its infancy.

China's 5G commercial services are available in 50 Chinese cities including Beijing, Shanghai, Guangzhou and Shenzhen, according to state-backed media Xinhua. In comparison, 5G services in the U.S. are offered only in certain cities. 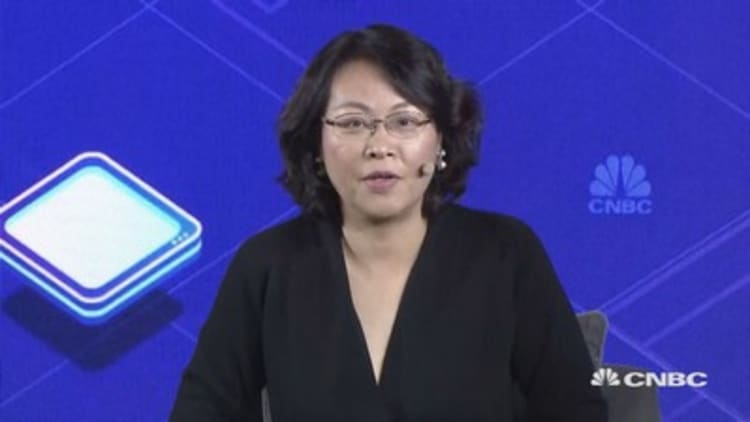 Wendy Liu, head of China strategy for UBS told CNBC there was greater willingness in China than elsewhere to back 5G and blockchain technologies. That's because they are key to facilitating and managing commerce in the world's most populous country, she said.

"Due to its own needs, (China) is going to push in that direction and you see this willingness to back these technologies more so than anywhere else," said Liu.

Blockchain, a technology that underpins cryptocurrency Bitcoin, is now being used by various industries from finance to food.

"Blockchain has the potential to fundamentally change the way businesses conduct business," said Lucy Gazmararian, senior manager at PwC Hong Kong. "So, a number of areas of financial services are really able to improve significantly because of blockchain infrastructure."

China recently threw its weight behind blockchain. President Xi Jinping reportedly urged China to "seize the opportunity" offered by blockchain, and called on the country to advance development in the field.

Edith Yeung, a partner at blockchain-focused venture capital fund Proof of Capital, said the Chinese government has been researching and studying the possibility of launching its own digital currency in recent years. 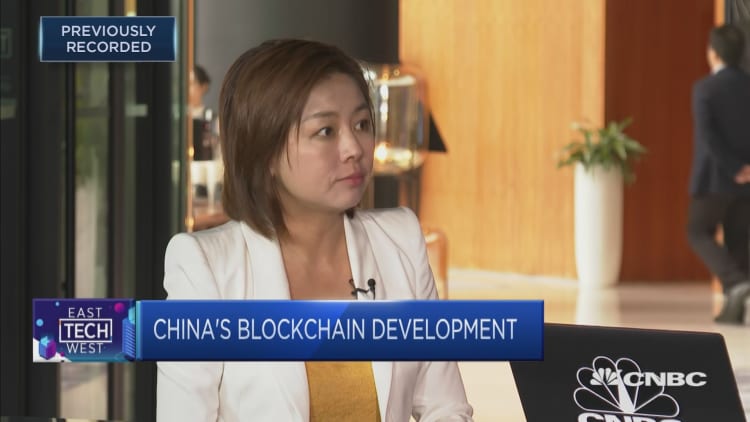 watch now
VIDEO3:0603:06
China's virtual currency may be rolled out within a year: Proof of Capital
East Tech West

She said Beijing has also identified entities for a potential rollout.

A virtual yuan could become a reality "quite soon," Yeung said, adding that it could even challenge the U.S. dollar's global dominance.

From self-driving cars to cancer detection, artificial intelligence (AI) promises to improve and speed up every business in the world.

AI can be broadly defined as technology that replicates human intelligence and behavior, in areas such as problem-solving, learning and reasoning.

The leadership in Beijing announced in 2017 that it wants to become the world leader in artificial intelligence by 2030.

"China is absolutely leading the world in AI," according to Frank Hester, founder of TPP, a UK-based healthtech company that has been doing business in China since 2013. "I've seen a change over the past 5 years (in China) … it's almost the policy now to do business with foreigners, which is great."

According to Alain Bénichou, CEO of IBM's Greater China business, 14% of firms in China have embraced AI technology. He said the rate of adoption in China is higher than the global average, but there is room to grow.

China's 'buy now, pay later' market is growing — but challenges remain
Toh Ee Ming
'Tip of the spear:' Venture capitalist says Chinese tech companies are just starting to go global
Arjun Kharpal
This is how to play China's tech crackdown and these are the potential winners, according to one investor
Arjun Kharpal
Read More