Bloomberg | Bloomberg | Getty Images
Ethan Brown, founder and chief executive officer of Beyond Meat Inc., center, rings the opening bell during the company's initial public offering (IPO) at the Nasdaq MarketSite in New York, U.S., on Thursday, May 2, 2019. Beyond Meat's successful initial public offering at $25 a share, the top end of its increased range, shows appetite for innovation in the packaged-food industry. Photographer: Michael Nagle/Bloomberg via Getty Images

As we look back at the initial public offerings market of 2019, a relatively unsung IPO from Beyond Meat stands out. It raised nearly a quarter-of-a-billion dollars to grow its line of plant-based meat products and was the best-performing IPO of companies that have each raised at least $200 million since 2000 — the peak of the dot com boom. Beyond Meat soared 163% from its original offering price on its first day of trading.

Could this success have been predicted ahead of time? A look at some metrics that we think are important to long-term corporate value and profitability suggests that it was possible. And the same argued for the biggest IPO debacle of the year: WeWork.

WeWork pulled its high-profile IPO this fall after initially filing paperwork in August. By the end of September, it had removed its CEO and delayed the IPO without setting a timetable for another attempt as its valuation dramatically declined. And somewhere in the middle, the much acclaimed public offerings of ride-hailing firms Lyft and Uber captivated the financial world at the outset but close the year significantly below their IPO prices.

Our research analyzed decades of corporate and investor data to uncover the key predictors of long-term value creation. Applying certain indicators of long-term success help pinpoint some of the critical differences between Beyond Meat and WeWork that tell a tale very different businesses at the point of IPO.

Fixed investment, such as spending on equipment or properties (often in the form of factories/offices) is the strongest predictor of long-term success according to our model (17% explanatory power). These numbers were similar for Beyond Meat and WeWork, but other aspects show a greater disparity in the companies' long-term orientation. Lyft and Uber's relatively lower fixed investment reflects their asset-light business model — common in the sharing economy – rather than a conscious decision to eschew fixed investment in favor of other priorities.

Average fixed investment for U.S.-traded companies in 2018 (on the MSCI ACWI) was 1%, more in line with Uber and Lyft. WeWork, though trailing Beyond Meat in this regard, was still far above the national average.

Having a diverse board — including a mix of genders and ages — has been found to correlate to strong returns (race/ethnicity is challenging to collect and assure in a uniform way so that is not included). Lyft had the highest board gender diversity at 30%, the target level for a number of board gender diversity advocates, such as The Thirty Percent Coalition. WeWork scored 0% in this regard, at the time of its IPO filing, when the board was made up entirely of men even though filing materials promoted a "culture of inclusivity."

Conversely, applying proven indicators of lower value creation over time to both companies' SEC filings would suggest outperformance of Beyond Meat's IPO and underperformance of WeWork's planned IPO. 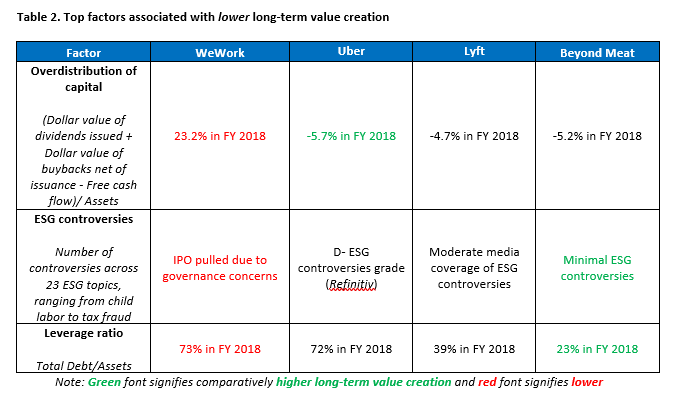 With respect to over-distribution of capital — the difference between capital raised and spent, normalized for assets — which has high predictive power (23%) in this context, Uber, Beyond Meat, and Lyft raised far more compared to their costs than did WeWork. WeWork's free cash flow in fiscal 2018 was negative $2.7 billion (a $1.7 billion operating loss + $1 billion in capex). That results in an over-distribution of $2 billion, when you account for the $750 million they raised in venture capital that year.

Naturally, efforts to return money to shareholders can and do make sense when companies do not have more attractive investments to pursue. And it is possible that the causal link actually runs in the other direction. That is, companies with limited growth potential may be more likely to return money to shareholders. But analysis shows that capital distributions to investors in excess of free cash flow are associated with weaker return on investment capital. In WeWork's case they were not necessarily returning capital to shareholders, but compared to the other companies here, they were losing more money while raising less capital, relative to their assets.

WeWork spends on many of the things all companies do — sales, marketing and development — but it also had to spend on finding and opening its office locations, making lease payments on commercial properties, and it also went into additional non-core businesses, some of which are now being sold.

Environmental, social and governance factors also factor into the performance divergence. Beyond Meat has an inherently favorable ESG profile: providing meat-eaters with plant-based meat substitutes to mitigate climate change is attractive to investors. Meanwhile, this fall WeWork pulled its IPO due to notable controversies – for example, former CEO Adam Neumann profiting by leasing multiple properties in which he has an ownership stake back to WeWork. The company's IPO process exposed issues with leadership accountability, conflicts of interest, and oversight.

Uber similarly made a myriad of missteps prior to its May 2019 IPO, including questionable vetting of its drivers, and allegations around unethical culture and harassment (which resulted in the resignation of CEO in 2017). It currently holds a D-minus ESG Controversies rating from data provider Refintiv. The correlation between ESG-related behavior and stock performance is in line with findings from Bank of America, which concluded that ESG controversies destroyed $500 billion of shareholder value from large U.S. companies over the past six years.

Third, WeWork's and Uber's leverage ratio was almost three times that of Beyond Meat. Leverage can be vital to businesses, and borrowing can be an auspicious sign that a company has ideas worth pursuing, but as a general tendency, excessive leverage among companies can translate into lower ROIC.

Naturally, IPO performance and corporate performance are more complex than just these handful of indicators. While these factors are by no means surefire precipitators of long-term success, they are commonalities present among high-performing companies over the past two decades and deserve consideration when evaluating new opportunities. A sensible next step, for companies and investors alike, is to build a deeper appreciation and understanding of pre-financial, intangible, and/or ESG metrics that can help predict successes or failures when entering the public markets.