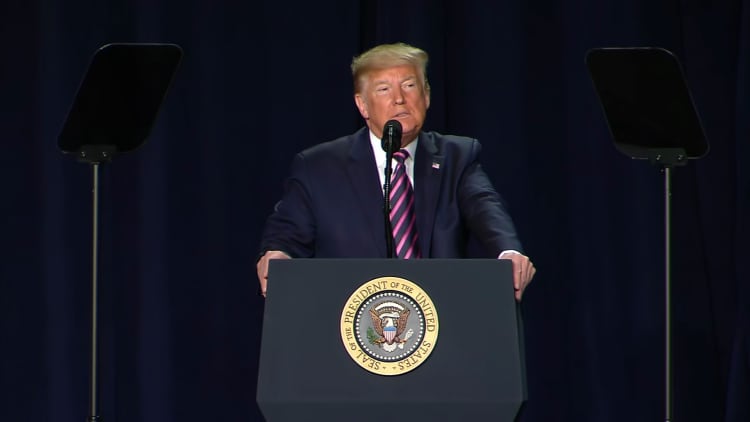 A day after being acquitted at his Senate impeachment trial, President Donald Trump attended a bipartisan National Prayer Breakfast on Thursday and warned his opponents that "we can't let that go on."

Trump did not use the word "impeachment" in his opening remarks at the annual Washington event. But his message was nonetheless clear, and it appeared to single out House Speaker Nancy Pelosi, D-Calif., who was sitting just a few feet away.

"So many people have been hurt, and we can't let that go on," Trump said at the religious gathering.

He also appeared to reference Sen. Mitt Romney of Utah, the only Republican to vote to convict Trump on the abuse of power charge. Romney said on the Senate floor that his faith guided him toward his decision to vote for Trump's removal from office.

"As everybody knows, my family, our great country and your president have been through a terrible ordeal by some very dishonest and corrupt people," Trump said. "They have done everything possible to destroy us, and by so doing very badly hurt our nation. They know what they are doing is wrong, but they put themselves far ahead of our great country."

"Weeks ago and again yesterday, courageous Republican politicians and leaders had the wisdom, fortitude and strength to do what everyone knows was right," Trump said.

Pelosi, who delivered a prayer to the crowd before Trump spoke, had personally announced the impeachment inquiry into Trump's Ukraine dealings late last year. The Democratic speaker has frequently clashed with Trump — just two days earlier she ripped up the text of his State of the Union address just after he delivered it to Congress. But Pelosi has also repeatedly invoked her faith throughout the process, saying she prays for the president daily.

In her remarks at the breakfast, Pelosi prayed "that we treat everyone with dignity and respect."

Trump took the podium a few minutes later with a different message.

"I don't like people who use their faith as justification for doing what they know is wrong. Nor do I like people who say 'I pray for you' when they know that that's not so," Trump said. "So many people have been hurt and we can't let that go on. I'll be discussing that a little bit later at the White House."

Pelosi said later Thursday morning that she saw those remarks as being directed at Romney.

"I thought what he said about Senator Romney was particularly without class" and "so inappropriate at a prayer breakfast," Pelosi said at her weekly press conference.

"Mischaracterizing other people's emotions -- he's talking about things that he knows little about: faith and prayer," she said.

Before the GOP-led Senate acquitted Trump with every Democrat voting to convict, Romney gave an emotional speech in which he explained why he was going to vote guilty on the abuse of power charge. "My promise before God to apply impartial justice required that I put my personal feelings and biases aside," Romney told the Senate.

President Donald Trump holds up a copy of USA Today's front page showing news of his acquittal in his Senate impeachment trial, as he arrives to address the National Prayer Breakfast in Washington, February 6, 2020.
Leah Millis | Reuters

Trump is expected to take a victory lap over his acquittal at noon ET at the White House.

As he stepped onto the stage of the Washington Hilton for the breakfast, Trump held two newspapers' front pages up to the crowd — both of which prominently displayed the word "ACQUITTED" in their top headlines.

Trump has previously accused both of those papers, USA Today and The Washington Post, of publishing false stories about him.

Wednesday's Senate votes brought the impeachment proceedings to an end after consuming the nation for four months.

Trump was impeached Dec. 18 on articles of abuse of power and obstruction of Congress for his efforts to pressure Ukraine to announce investigations into his political opponents.

Democrats accused Trump of abusing the power of his office by pressing Ukraine President Volodymyr Zelenskiy to announce a probe into former Vice President Joe Biden and his son Hunter, as well as a debunked conspiracy theory about election meddling in 2016, while withholding nearly $400 million in congressionally approved military aid.

Democrats said Trump sought to cheat in the 2020 presidential contest by coercing a foreign ally to smear Biden, Trump's possible general election opponent, with the stain of a criminal probe. They also argued that Trump obstructed Congress by refusing to hand over any documents in the House's probe, and by pressuring potential witnesses not to comply.