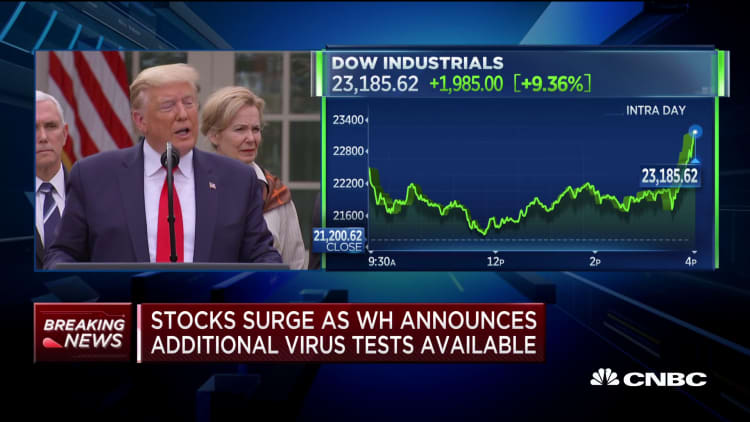 watch now
VIDEO1:0101:01
President Trump says he will 'most likely' get tested for coronavirus
Closing Bell

President Donald Trump said Friday that he will "most likely" be tested for the coronavirus – minutes after he said that he will not take any precautionary measures following his close contact at Mar-a-Lago with a Brazilian official who was diagnosed with the disease.

Trump, speaking in the Rose Garden after declaring the outbreak a national emergency, said that he has no symptoms of the COVID-19 virus and had not been advised by White House doctors to receive testing.

When a reporter asked if he was being "selfish" by not getting tested – even when other administration officials advised self-isolation after exposure to an infected person – Trump pushed back, "I didn't say I wasn't going to be tested."

Asked if he would receive testing, Trump said: "Most likely, yeah. Most likely. Not for that reason, but because I think I will do it anyway."

Trump added that he would do it "fairly soon."

Trump said earlier this week that he was "not concerned" about his exposure to Brazilian press secretary Fabio Wajngarten, who was at Mar-a-Lago over the weekend as part of a delegation of Brazilian officials, including the country's president, Jair Bolsonaro. Mar-a-Lago is Trump's Florida resort.

Brazil later revealed that Wajngarten had tested positive for the coronavirus. The White House said at the time that Trump and Vice President Mike Pence, who leads the U.S. response to the virus and was also at Mar-a-Lago, did not need to be tested.

Bolsonaro did receive testing, however. He announced Friday morning that he had tested negative for the virus.

Minutes before Trump said that he would likely also get tested, he said that "no," he would not take precautionary measures.

"No symptoms whatsoever," Trump said. "We had a great meeting with the president of Brazil, Bolsonaro."

"As you know, he tested negative, meaning nothing wrong this morning and we got that word, too," Trump added. "Because we did have dinner with him, we were sitting next to each other for a long period of time."

Another reporter noted that other U.S. politicians had opted to self-quarantine after learning of their contact with people who have tested positive for the coronavirus.

Republican Sens. Rick Scott of Florida and Lindsey Graham of South Carolina said in statements Thursday that they had been in proximity to Wajngarten over the weekend. Both of those lawmakers said that they would quarantine themselves as a precautionary measure.

On Saturday, Wajngarten shared a photo on his Instagram page of himself standing directly next to Trump and near Pence in an ornate room. The Brazilian press aide is wearing a baseball cap emblazoned with the phrase "Make Brazil Great Again," a riff on Trump's campaign slogan.

A photo showing a Brazilian government official (r) posing for a photo next to President Donald Trump and Vice President Mike Pence at Mar-A-Lago has tested positive for the 2019 novel coronavirus.