The disclosure that the U.S. government is currently in discussions with Facebook, Google and other tech companies about the possibility of using location and movement data from Americans' smartphones to combat coronavirus has some people on edge about potential privacy and cybersecurity issues. Some technology advocates believe the effort could help change the narrative for these companies when it comes to data privacy.

The effort to harness location data is being facilitated by a task force of 60 tech companies working with the White House Office of Science of Technology and the Office of American Innovation, said a source familiar with the situation. Companies and organizations involved range from large to small, including Facebook, Google, Twitter, Uber, Apple, IBM, as well as public health leaders from Harvard and other institutions.

With more than 223,000 reported cases worldwide and 9,149 deaths, the coronavirus shows no signs of slowing. Officials believe that the data they can glean from smartphones could help them decipher where the next flood of cases will be and ultimately where to allocate additional health resources.

"The task force has a simple mission: to use the specialized expertise of the tech community provide recommendations to the White House and other public health officials that help lessen the impact of this disease. Working with experts across fields, we are finding ways to have an impact while keeping all of tech's existing commitments to consumers," said Josh Mendelsohn, managing partner at venture capital firm Hangar, which is part of the task force.

The government has been inundated with offerings of technological help but doesn't always have the resources to vet the offers or the companies making them, the source said. The task force has been sorting through and analyzing the various solutions, proposals and recommendations, focusing on four areas: location data, clinical data, the social isolation problem and telehealth. 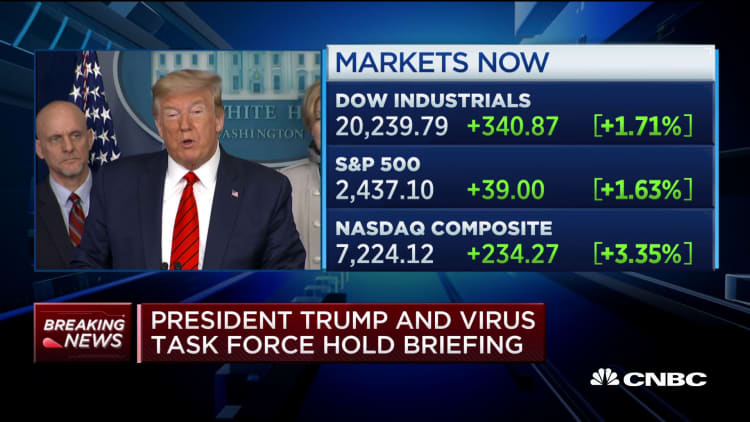 On March 16 the White House Office of Science and Technology Policy issued a call to action to the tech community and artificial intelligence experts to develop new text and data-mining techniques that could help the science community answer high-priority scientific questions related to COVID-19.

"It's all hands on deck as we face the COVID-19 pandemic," said Dr. Eric Horvitz, chief scientific officer at Microsoft in a statement. "We need to come together as companies, governments and scientists and work to bring our best technologies to bear across biomedicine, epidemiology, AI and other sciences. The COVID-19 literature resource and challenge will stimulate efforts that can accelerate the path to solutions on COVID-19."

The White House Office of Science and Technology Policy did not reply to a request for comment.

Verily, part of Google's parent company Alphabet, told CNBC it is not using mobile geolocation tracking for the Baseline COVID-19 program. Google would not comment to CNBC on talks with the White House on using anonymized location data.

'There is never no risk'

"We're coming off years of intense criticism of these companies ... but at some point we need to rely on them," said Michelle Richardson, director of the Privacy & Data Project at the Center for Democracy & Technology. "If people are scared because of past overreaches, this is an opportunity to rebuild trust. These are sophisticated companies, and they have the ability to come up with creative solutions and protect data in ways smaller companies can't. And maybe find a way to serve the public interest without sharing in a way that upsets people."

But Richardson said there is never no risk in these technology efforts. "There are gradations of data-sharing," Richardson said. "Sharing of individual information on a known person, especially if it is combining location data and government health information, becomes more dangerous. That can be used in ways that harm or exploit people.

"To say it's truly aggregated and there are lots of people in the area, here it is with names taken off ... it can be reidentified pretty easily by both government and companies," Richardson said.

In a statement to the Washington Post, Google spokesman Johnny Luu said the company is "exploring ways that aggregate anonymized location information could help in the fight against COVID-19." One example could be helping health authorities determine the impact of social distancing, similar to the way we show popular restaurant times and traffic patterns in Google Maps, he said, adding that it "would not involve sharing data about any individual's location, movement or contacts."

A growing interest in mining data

There has been growing interest in analyzing and using data collected by companies such as Facebook and Google. Last May, Facebook's data scientists introduced disease-prevention maps to help nonprofits and universities working in public health get ahead of disease outbreaks. Among the offerings: population density maps that use satellite imagery and census data to create detailed maps that include insights on demographics such as young or elderly populations. Also, movement maps that draw on health system information and aggregated location information from Facebook.

"There is no agreement to share people's location data with governments," said Facebook spokesperson Andy Stone, who says the tech giant is creating disease-prevention maps that draw on Facebook location data and other sources. "This data is available to researchers, not the government. In the U.S. we briefed the CDC on the work we do with aggregate, de-identified data maps with researchers — which has been previously reported — and they were supportive of our doing more of it. We have not received requests for location data from the U.S. government."

Andrew Schroeder, vice president of research and analysis at Direct Relief, a California-based disaster-relief organization, has been working with mapping tools such as those at Facebook to track population movements during natural disasters, like hurricanes or wildfires, to determine evacuation patterns and if people are leaving the fire perimeter zone.

More recently, he has been aggregating data to give public officials in California a clearer view into what is happening with the coronavirus. Researchers are looking to integrate location data into disease-forecasting models to estimate contact rates, rates of transmission and to project where the disease might spread to next, in particular to those in the highest risk groups.

"The key actors on social distancing are public officials. We have to figure out a way to make the data we do have accessible," he said.

For other governments, such as Taiwan, modeling and tracking data has been a key part of their coronavirus response. Facebook has launched co-location maps there, which use data about mobility to forecast where different groups of people are likely to cross paths. Researchers can then rank which communities are most at risk and make recommendations.

But such information is not readily available in the U.S. and may be more difficult to implement. In addition to privacy concerns, some worry that a focus on tracking cases might take away from other efforts.

It would be foolish to not explore these opportunities. ... South Korea and Israel have already begun initiatives to use smartphone data to monitor the spread of coronavirus, and other countries likely will as well.
Daniel Castro
vice president at the Information Technology and Innovation Foundation

"It would be foolish to not explore these opportunities," said Daniel Castro, vice president at the Information Technology and Innovation Foundation.

"People may have privacy concerns, and some of these concerns may be legitimate. But focusing on only privacy while ignoring public health would be a mistake. South Korea and Israel have already begun initiatives to use smartphone data to monitor the spread of coronavirus, and other countries likely will as well. If the United States pursues this as well, it can show other countries how to do so while protecting American values and civil liberties," he said.

Time is of the essence

Others, like Susan Levinson, CEO of BioAegis Therapeutics, a North Brunswick, New Jersey-based biotech company focused on developing therapies for infectious, inflammatory and degenerative diseases, believes time is of the essence. Her team is currently working to fast-track a therapy, a naturally occurring human protein called recombinant plasma gelsolin, as a treatment for COVID-19.

It has already been in several clinical studies outside the U.S.

"While epidemiologists surely can learn from the data that is collected, the most urgent need for patients is to push forward the development of therapeutics to save lives. By the time the technology is put in place, the infection will likely have spread across the country, and the question is whether this is useful today or for the next pandemic," she said.

The scientists at BioAegis are currently working to fast-track a therapy, a naturally occurring human protein called recombinant plasma gelsolin, as a treatment for COVID-19.
BioAegis Therapeutics

"Let's not forget that this is really a serious medical issue. My concern is more about the directing of resources to the solutions that will save lives and rescue our health-care system from collapse. Investment in infectious disease has plummeted in the last decade, and pharmaceutical companies have exited the space due to the impact of antibiotic resistance on the business model," said Levinson.