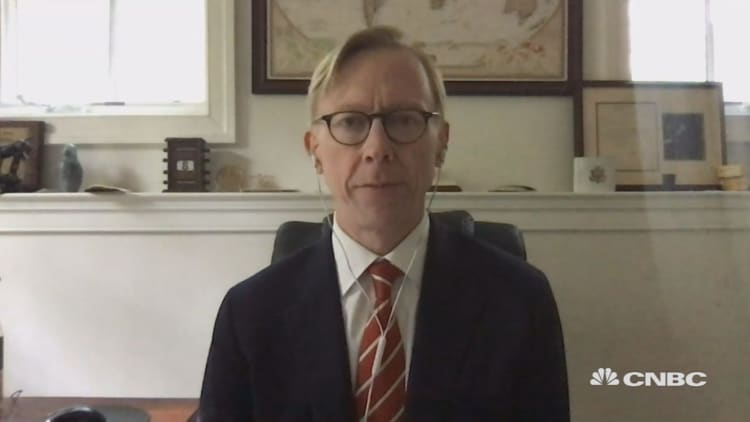 DUBAI, United Arab Emirates — Washington's commitment to the security of its Gulf allies is unchanged despite what appears to be a shift in force posture in the region, U.S. Special Representative for Iran Brian Hook told CNBC.

"Our mission is not at all changed. We're standing with our partners and our allies in the region. We're doing everything we can to protect American interests," Hook told CNBC's Hadley Gamble in an exclusive interview Friday.

The comments come on the back of news that the Pentagon is removing two Patriot anti-missile batteries from Saudi Arabia along with a number of military personnel, deployed last year in the wake of attacks in the region that Riyadh and Washington blame on Iran. The move is being seen as a scaling down of last year's large military build-up designed to deter Iran.

Hook disputed the suggestion that this meant the U.S. no longer viewed its longtime adversary Iran as a threat.

"No, it doesn't mean that Iran is no longer a threat," Hook said. "Our troop levels go up and down depending on the circumstances, but the mission set is the same. Our mission is not at all changed. We're standing with our partners and our allies in the region. We're doing everything we can to protect American interests."

Amid Iran's economic crisis — the worst in the Islamic Republic's 41-year history — and the coronavirus outbreak that's made it the regional epicenter of the disease, many U.S. officials believe the regime is, for now, on the back foot.

Hook emphasized what he saw as President Donald Trump's role in restoring "a credible military deterrent to act in self-defense, which is something that had been lost," noting the January killing of top Iranian commander Qasem Soleimani.

"Deterrence is something which is easy to lose," he said. "But maintaining it is ... a policy you'd have to implement every day, and we're going to continue working with the Saudis, the Emiratis, all of our partners in the region."

The Trump administration has sent some 14,000 additional troops to the Gulf region since May of last year in response to dramatically heightened tensions with Iran. The U.S. accuses Iran of carrying out multiple sabotage attacks on foreign tankers in Gulf waters last year and of precision strikes on Saudi Aramco oil facilities in September, attacks the government in Tehran denies. Last year also saw a buildup of U.S. Navy vessels and patrols in and around the Strait of Hormuz, the vital conduit for 30% of the world's seaborne oil.

Some of the president's supporters have criticized the amount of U.S. manpower and taxpayer money sent to defend Saudi Arabia. That criticism has grown louder amid a crisis in oil markets that saw Saudi Arabia temporarily slash its oil prices as demand for the commodity was crushed by the coronavirus — a move that dealt a severe blow to the U.S. shale industry.

Asked whether U.S. taxpayers would continue to accept the cost burden of defending Gulf allies, particularly amid the worst economic downturn since the Great Depression, Hook emphasized the administration's efforts toward burden-sharing. 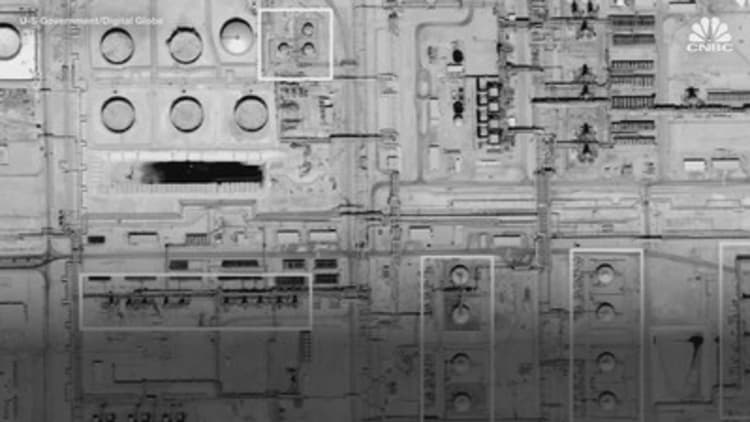 "What the president has tried to do is to increase the burden-sharing," the diplomat said. "The president has demanded more from our partners and allies so that America doesn't have to do the lion's share of the work. And we've been very successful." Hook pointed to the International Maritime Security Construct, a consortium of countries led by the U.S. and formed last year to monitor regional waters in the Gulf and ensure freedom of navigation.

"We've got a coalition together, which we think has done a good job of disrupting and deterring Iranian maritime aggression. We have a number of initiatives in the region that we're going to continue to work on."

Force posture 'goes up and down'

Hook also stressed the administration's determination to renew a U.N. arms embargo on Iran set to expire in October. Iran last month launched its first-ever military satellite into space, and while the State Department has not confirmed whether it was in operation, Secretary of State Mike Pompeo condemned the launch.

Friday's discussion with Hook coincided with the two-year anniversary of the U.S. withdrawal from the 2015 Iranian nuclear deal and the start of Trump's "maximum pressure" campaign against Iran. Given the escalation in attacks and force posturing since then, many criticize it as only having emboldened Iran to act out more aggressively. Hook denies that assertion, maintaining that support for allies and deterrence against Tehran are at all-time highs — despite the removal of the Patriot systems and a reported troop reduction.

"Troop levels and our force posture sort of goes up and down as the circumstances warrant," Hook said. "But we are always committed to the safety of American diplomats, American troops, and also to supporting our partners and allies in the region. Over the last almost year, you've seen us move around troops and also equipment around the region. But the mission set doesn't change."

Several rocket strikes by Iranian-backed Iraqi militias have targeted U.S. forces in Iraq since the January killing of Soleimani, and in April, the U.S. Navy accused Iran's Revolutionary Guard of conducting "harassing" approaches of its ships with 11 Iranian navy gunboats.

Trump responded to the news a few days later on Twitter, writing: "I have instructed the United States Navy to shoot down and destroy any and all Iranian gunboats if they harass our ships at sea."