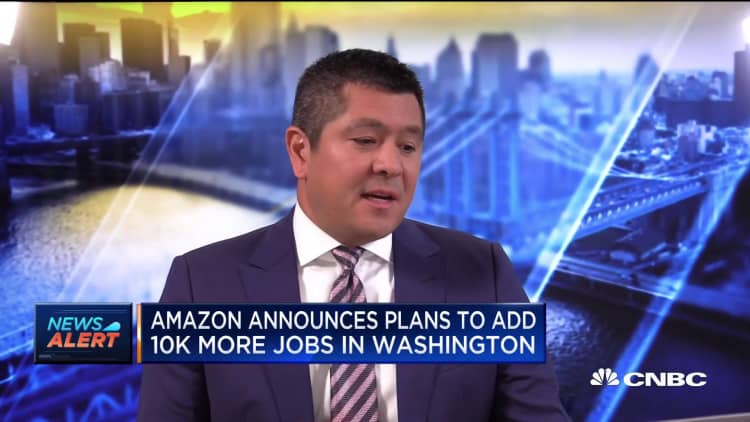 Amazon will hire 10,000 employees in the Seattle suburb of Bellevue over the next few years, on top of the 15,000 jobs it already plans to create there, the company said Friday.

To house the additional employees, Amazon has secured an additional 2 million square feet of office space in downtown Bellevue. It will rent the 42-story 555 Tower and West Main, a property that spans an entire block and includes three towers. Both projects are under development, said John Schoettler, Amazon's vice president of real estate and facilities, in a blog post.

That's in addition to Amazon's planned development in downtown Bellevue, a 43-story tower referred to as the Bellevue 600 project. The tower, its largest, will have about 1 million square feet of office space and is expected to be completed by 2024.

In the coming weeks, Amazon will begin the process of developing a 27-story office tower, which is the "second phase" of its Bellevue 600 project, Schoettler said. The company expects the tower to be completed by 2025.

More than 2,000 employees currently work in Bellevue, and the company has about 430 job openings in the city. It's also where Amazon got its start. Amazon CEO Jeff Bezos founded the company in 1994 out of a 1,540-square-foot house in West Bellevue.

A render of Amazon's 43-story office tower in Bellevue. Construction is expected to be complete by 2024.
Amazon

Amazon has continued to secure office space outside of Seattle, where it's headquartered, amid growing tensions with city officials. In July, the Seattle City Council passed the JumpStart Tax, a payroll tax on the city's biggest businesses and highest earners, including Amazon, which fought the passage of a so-called head tax in 2018.

Earlier this month, Amazon announced it is planning to create 3,500 jobs across Dallas, Detroit, Denver, New York City, Phoenix and San Diego. Of the new roles, 2,000 will be based in New York, which is in addition to the thousands of jobs it has already committed to creating there.

Amazon said in August it now has 876,000 employees worldwide.