As Democratic presidential candidate Joe Biden's running mate, Sen. Kamala Harris is set to have a busy fall on the campaign trail.

Harris' trick to staying focused and energized despite the draining schedule?

"I work out every morning, regardless of how much sleep I've had," she told former President Barack Obama in an interview published on Twitter Monday.

Like many people exercising at home during the Covid-19 pandemic, Harris said that she couldn't find hand weights to use in her workouts, because they were sold out. (After gyms closed, the demand for common home workout equipment such as kettlebells and adjustable weight dumbbells surged.) So Harris got creative.

"I had liter water bottles that I filled, of course, with water to use them as hand weights," the California senator told Obama.

Harris has previously said that her workout routine was 30 minutes on the elliptical or treadmill, or swimming, "if it's not going to create an issue with my hair," she told The Cut in 2018.

Harris also told The Cut that when she had time on the weekends, she would take an hour-long Soul Survivor class at SoulCycle. The music-based indoor cycling classes are "like going to the club," she told told the San Francisco Chronicle in 2017.

These days, Harris listens to her own music playlist during her workouts. "You know I love some Mary J. Blige," she told Obama.

Exercise is also a way that Harris finds work-life balance. Morning exercise, "gets your blood flowing," she told Lenny Letter in 2015. "It gets your adrenaline flowing."

In fact, when Harris mentors young women in college, she often suggests that they start to exercise and eat well. "It has nothing to do with your weight," she said. "It's about your mind."

Cooking is another outlet that Harris has used to unwind.

"Everything else can be crazy, I can be on six planes in one week, and what makes me feel normal is making Sunday-night family dinner," Harris told The Cut. "If I'm cooking, I feel like I'm in control of my life." In fact, she would read recipes to relax at the end of a day, she said.

Now, when Harris wants to take a break during the day, she loves to "FaceTime with the kids in my life," she told Obama. Harris has two adult step-children, Ella Emhoff and Cole Emhoff, from her husband Doug Emhoff's first marriage to Kerstin Emhoff. They affectionately call Harris "Momala."

Keeping in touch with young people helps "get a sense of the world through their eyes," Harris said. "Talk to them: How are you feeling about things? What is your day like?" 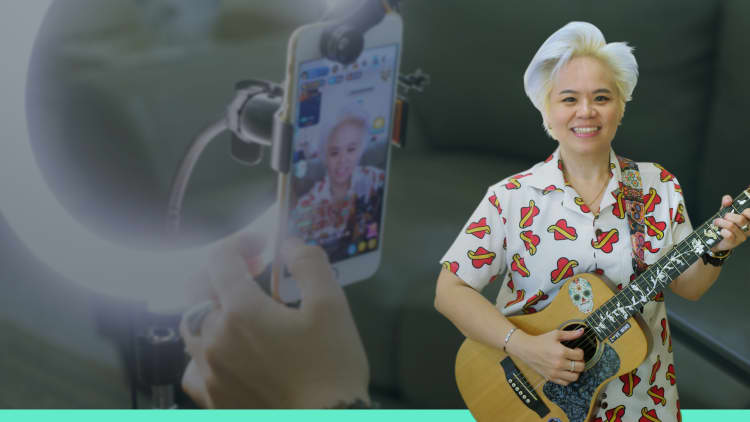 VIDEO8:5908:59
How gig workers are surviving the pandemic
Singapore: From Crisis to Recovery