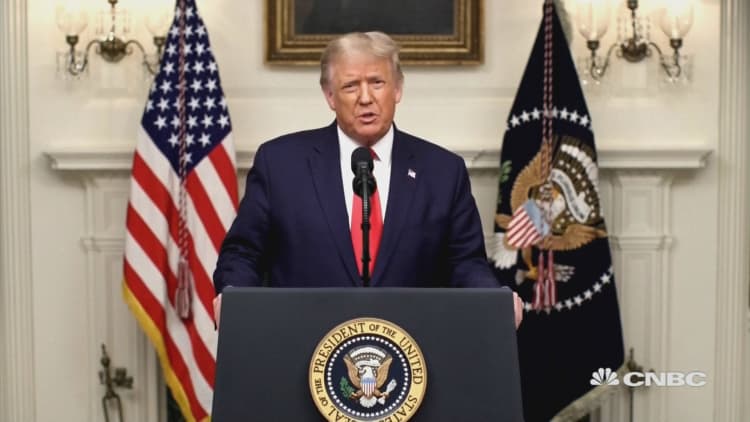 NEW YORK — President Donald Trump on Tuesday called on world leaders at the United Nations to "hold China accountable" for the coronavirus pandemic.

Trump, a frequent critic of the U.N., slammed the Chinese government and the World Health Organization for the deadly virus and the social and economic fallout from the health crisis.

"The Chinese government and the World Health Organization, which is virtually controlled by China, falsely declared that there was no evidence of human-to-human transmission. Later, they falsely said people without symptoms would not spread the disease," Trump said in a recorded speech from the White House. The WHO is a United Nations agency.

"The United Nations must hold China accountable for their actions," he added. The virus originated in China.

Trump also said that the U.S. had three potential coronavirus vaccines that were in the final stage of clinical trials and promised to distribute them globally. The Trump administration has previously said it will not participate in the WHO-led coronavirus vaccine effort.

The Covid-19 Vaccine Global Access Facility, or COVAX, initiative includes more than 170 nations and is aimed at "working with vaccine manufacturers to provide countries worldwide equitable access to safe and effective vaccines." The move falls in line with Trump's aim to remove the United States from the World Health Organization.

Earlier this year, Trump said that he had suspended U.S. funding to the organization pending a review, citing what he called "the World Health Organization's role in severely mismanaging and covering up the spread of the coronavirus."

In July, the Trump administration submitted to the U.N. secretary-general its notice to withdraw from the WHO by July 6, 2021. The notice to the United Nations was the first step in a yearlong process that will rely on several factors outside of Trump's control, including cooperation from Congress and the president's own reelection in November, neither of which are assured.

Last month, WHO Director-General Tedros Adhanom Ghebreyesus said he hopes the United States will reconsider its decision to leave the United Nations' health organization, adding that the coronavirus can't be defeated "in a divided world." Democratic presidential nominee Joe Biden has previously said that he would have the U.S. rejoin the WHO on day one of his presidency, were he to defeat Trump this November.

Chinese President Xi Jinping, who also addressed the U.N. remotely, said that Beijing will "continue to narrow differences and resolve disputes with others through dialogue and negotiation."

"Facing the virus, we should enhance solidarity and get through this together," Xi said, adding that world leaders should follow "the leading role of the World Health Organization."

"Any attempt of politicizing the issue or stigmatization must be rejected," Xi said.

On Saturday, the United States unilaterally reimposed U.N. sanctions on Tehran through a snapback process, which other U.N. Security Council members have previously said Washington does not have the authority to execute.

"No matter who you are, if you violate the U.N. arms embargo on Iran, you risk sanctions," Secretary of State Mike Pompeo said Monday alongside Secretary of Defense Mark Esper and Treasury Secretary Steven Mnuchin.

"Our actions today are a warning that should be heard worldwide," Trump's top diplomat said.