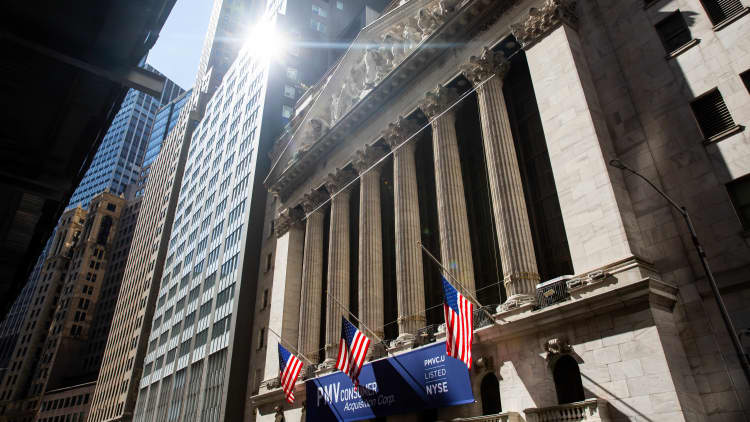 watch now
VIDEO2:4402:44
Stocks fall for third day in a row on stimulus deal uncertainty — Three experts on what to watch
Trading Nation

Stocks fell for a third day in a row on Thursday as hope for a U.S. coronavirus stimulus deal continues to decrease while infections across Europe are on the rise.

Facebook led most of Big Tech lower, falling 1.9% amid rising regulatory concerns. Amazon dipped 0.8%. Alphabet and Microsoft each fell 0.5% and Apple dipped 0.4%. Those losses were somewhat offset by gains in bank and energy names. JPMorgan Chase, Morgan Stanley and Citigroup were all up more than 1%. Exxon Mobil and Chevron gained 0.9% and 0.8%, respectively.

Thursday's losses marked the third straight daily decline for the major averages, their longest losing streak in nearly a month.

"Market volatility is set to continue in the weeks ahead as investors brace for a host of uncertainties—the timing of vaccine availability (after a setback for Johnson & Johnson), the size and timing of additional US fiscal stimulus, and the election outcome," wrote Mark Haefele, chief investment officer of global wealth management at UBS. "The uneven recovery in the US economy also adds to investor concerns as the results season kicked off this week."

Treasury Secretary Steven Mnuchin told CNBC's "Squawk Box" that he and President Donald Trump are committed to getting a stimulus deal done and that while it will be hard to get one done before the election, they will keep trying.

Mnuchin, who plans to speak with House Speaker Nancy Pelosi again Thursday, said progress has been made, specifically in reference to Democrats' testing language for the deal. However, he said that "politics" may be getting in the way and that the Democrats still want an "all or nothing" deal.

Sentiment was also dampened as some European governments reinstate pandemic restrictions to curb a second wave of the coronavirus. France has declared a public health state of emergency and the U.K. is nearing a second national lockdown. European stock benchmarks dropped broadly.

Meanwhile, the Labor Department said Thursday there were 898,000 first-time filers of jobless benefits in the prior week, higher than a Dow Jones estimate of 830,000.

The uncertainty over new U.S. fiscal aid and disappointing economic data, along with the spike in coronavirus cases in Europe, came as investors waded through a slew of corporate earnings results.

Morgan Stanley reported third quarter profit of $1.66 per share, exceeding the $1.28 estimate of analysts surveyed by Refinitiv. It generated revenue of $11.7 billion on the back of strong trading, a billion dollars more than the estimate. Shares of Morgan Stanley rose 1.3%.

"This is the second earnings season in the wake of the Covid-19 pandemic ... and arguably this will be one of the most important earnings seasons ever," wrote Jeff Kilburg, CEO at KKM Financial. "As investors globally try to gauge the actual damage inflicted upon the economy by Covid-19, expectations are simply that earnings will not be as bad as they were in Q2."

"In the event we have an overall positive tone transmitted, I believe the path for U.S. equites is higher," Kilburg added.

Meanwhile, The Financial Times reported that France and the Netherlands are endorsing a plan for the European Union to curb the power of Big Tech, including by possibly breaking companies up.