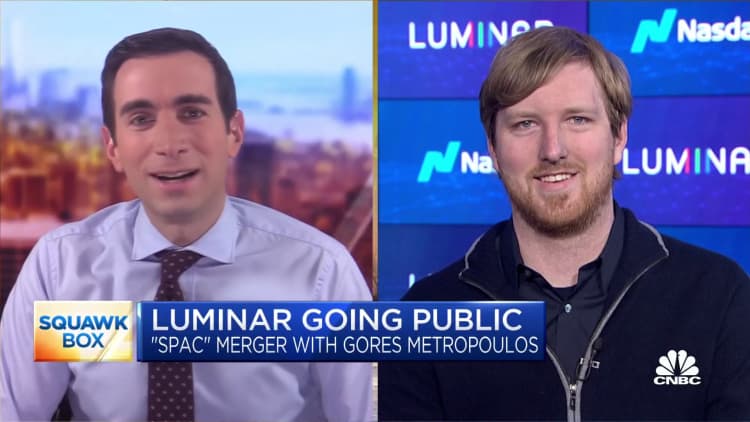 Tesla isn't the only upstart auto industry player having a big year.

Luminar, which creates lidar technology critical to many automakers' autonomous driving efforts, is going public on Thursday through a special purpose acquisition company (SPAC) and the deal will make Luminar co-founder and CEO Austin Russell a billionaire — at the age of 25.

Russell, who founded the company as a 17-year-old high school student, said the feeling of becoming a billionaire (on paper, at least) is "absolutely incredible" and "totally surreal."

But the Luminar CEO said it also follows the plan his company has had in mind since founding. "It is totally surreal and it totally makes sense and it is hard to explain the dichotomy of it, but this has always been the goal," he said. "We set up the company to be a long-term sustainable business and power the future of autonomy for all of these automakers. We are in it for the long-term," Russell told CNBC's "Squawk Box" on Thursday morning.

Luminar co-founder and CEO Austin Russell says it is "absolutely incredible" and "totally surreal" to become a billionaire at 25. And he did it even though Elon Musk calls the core lidar sensing technology used by Luminar, a "freaking stupid" solution for autonomous driving.
Source: Luminar

Russell was a bit of a science prodigy.

"I guess, I did memorize the periodic table — I think I was around 2 or so," Russell told CNBC Make It in a 2018 interview. "I was just obsessed with learning certain things ... just independently learning and understanding a lot of new types of scientific fields, among other things."

That evolved into work on lasers and ultimately, lidar, which uses lasers to detect and measure distance and ultimately create a 3D map of the real world environment that can be used in self-driving.

He ended up at Stanford University studying physics, but dropped out and received a Thiel Fellowship, created by tech icon and PayPal co-founder Peter Thiel to provide tech talent with alternatives to traditional education programs.

Russell said the company has a forward looking book of auto business at $1.3 billion and estimates its overall market opportunity within the multi-trillion auto market at "half a trillion" as lidar and autonomous vehicles come into focus for the auto industry.

Luminar works with automakers including Volvo, which is owned by Chinese auto company Geely.

While Russell said it can be hard for the market to value new technologies that lack existing market comps, he noted Luminar is working with Intel's Mobileye, which also focused on the future of autonomous sensing systems. "It's cool to see back in 2017 they were acquired at a 43x revenue multiple of the business."

Luminar, which made the 2018 CNBC Disruptor 50 list, began trading under the ticker symbol LAZR on the Nasdaq on Thursday, after its deal with SPAC Gores Metropoulos was completed.

The Luminar CEO is not worried about lidar technology his firm has built become commoditized IP, saying the rise of this breakthrough technology is closer to what chip maker Nvidia does than a tech hardware company. "We have one of the most insane moats of any company at this stage," Russell said. "We've built out and pioneered core components ... building from the ground up. We have not used commodity parts. We have the largest patent portfolio in sensing systems, more than the top five other lidar R&D efforts combined."

Competing lidar technologies include firms such as Velodyne and Alphabet's Waymo.

There is one notable doubter.

"I think 50 commercial partners and a majority of the major automakers we are working with would disagree. Cameras and other systems are great for assisted driving, but with autonomy, that's where need really high-performance lidar," he said, adding that Luminar is the only company able to provide this technology at production and for use at highway speeds.