A few years ago at a dinner, Trey Lockerbie, founder and CEO of kombucha company Better Booch, met billionaire Warren Buffett. He took the opportunity to ask him a few questions about investing, Lockerbie said on "The Good Life" podcast with Sean Murray on Dec. 14.

Lockerbie, who was at the time an avid options trader (a more risky method of investing in which a trader can bet on which way the market will swing), asked Buffett whether books by Benjamin Graham, who was Buffett's mentor, were somewhat outdated. Graham wrote "Security Analysis" in 1934 and "Intelligent Investor" in 1949.

Buffett — widely regarded as the best investor alive — has used the same strategy of value investing taught by Graham for decades. So Buffett suggested that Lockerbie reread Graham's books and focus on the chapters about the psychology of investing, Lockerbie said.

The book had a big impact on Buffett – in fact, after he found out Graham and Dodd taught at Columbia University, Buffett contacted Dodd and asked to be admitted for classes there.

"I said, 'Dear Professor Dodd. I thought you guys were dead, but now that I found out that you're alive and teaching at Columbia, I would really like to come,'" Buffett said in HBO's "Becoming Warren Buffett." (Buffett got his Master's there.)

After all, "my financial life changed with that purchase [of 'Intelligent Investor']," Buffett wrote in his 2013 letter to Berkshire Hathaway shareholders. "Ben's ideas were explained logically in elegant, easy-to-understand prose."

The book offers a deep dive into the process of value investing.

"Of all the investments I ever made, buying Ben's book was the best (except for my purchase of two marriage licenses)," Buffett said in 2013.

Books by Goodman (aka Smith)

"[Goodman, aka Smith], especially in 'The Money Game,' was incredibly insightful, and he knew how to make the prose sing as well," Buffett told The Wall Street Journal in 2014.

In "The Money Game," which was published in 1968, Goodman argued that the stock market should be viewed as a game and wrote of the frenzy of Wall Street in the '60s as an example.

"He knew how to put his finger on things that nobody had identified before. [Goodman] stuck to the facts, but he made them a helluva lot more interesting," Buffett said.

Published in 1972, "Supermoney" highlights the stock market in the '70s and even profiles Buffett himself.

"In this book, Adam Smith says I like baseball metaphors. He's right," Buffett wrote in a forward to the book.

"So I will just describe this book as the equivalent of the performance of [New York Yankees'] Don Larsen on October 8, 1956. For the uninitiated, that was the day he pitched the only perfect game in World Series history."

Don't miss: The best 0% APR credit cards so you can finance your debt or new purchases interest-free

Check out: The 5 books Bill Gates recommends you read this holiday season 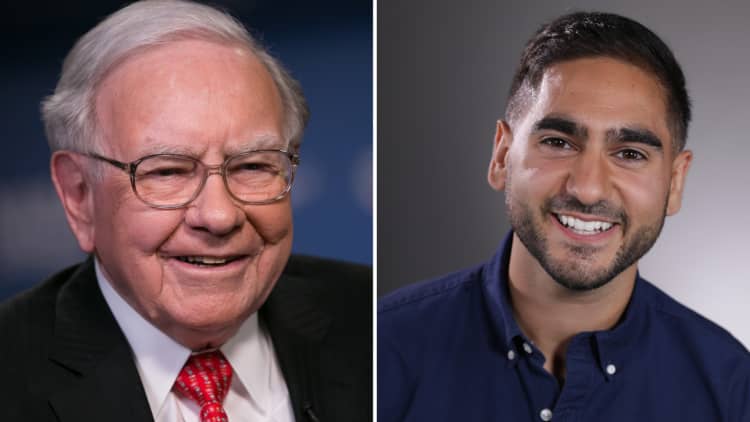 VIDEO0:0000:00
This 25-year-old learned a tough business lesson from Warren Buffett
Make It