A rendering of Archer's planned electric aircraft, which the company says will be capable of 60 miles at speeds of up to 150 mph
Archer

Fiat Chrysler is teaming up with air mobility company Archer to help lower costs and accelerate the launch of an electric "flying car," more formally known as a vertical takeoff and landing (eVTOL) aircraft.

Unlike traditional planes that use jet engines or helicopters with a large spinning rotor, eVTOL aircraft use electric motors to power rotating wings or smaller rotors, almost like drones, to allow for vertical takeoffs and landings. The aircraft are expected to be used as air taxis for shorter, low-level routes to ease road congestion. Some are being developed as unmanned aircraft without the need for pilots.

Morgan Stanley has said the autonomous urban aircraft market may be worth $1.5 trillion by 2040.

"Electrification within the transportation sector whether on roads or in the air is the future and with any new and rapidly developing technology, scale is important," Doug Ostermann, Fiat Chrysler's head of global business development, said in a statement. "Our partnership with Archer has mutual benefits and will enable innovative, environmentally friendly transportation solutions to be brought to market at an accelerated pace." 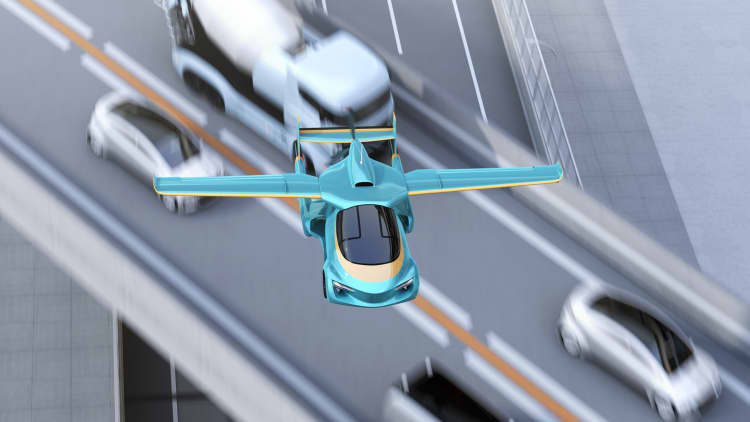 Archer's aircraft is expected to carry passengers for 60 miles at speeds of up to 150 mph while producing minimal noise. It is first expected to be a manned-aircraft with a pilot. The company plans to unveil a demonstrator aircraft later this year, followed by FAA certification by 2024, according to Archer co-founders and co-CEOs Brett Adcock and Adam Goldstein.

"For us, it's a monumental point in time where we get to partner with a global powerhouse company that enables us to mass manufacture. It really enables us and gives us a lot of the credibility also that we need to be one of the major players in this space," Goldstein told CNBC.  "We're super excited about the relationship."

Marc Lore, Walmart's e-commerce chief and founder of Jet.com, is Archer's largest investor. Archer also has investments from an undisclosed number of others as well as Adcock and Goldstein, who developed and sold an online recruiting marketplace for a little more than $100 million in 2018.

"As we think about this business for us, in order to achieve real scale, we have to manufacture our aircraft like the autos manufacture cars today," Adcock said, citing safety, mass manufacturing and other characteristics.