Pizza Hut is jumping on the Detroit-style pan pizza trend as it looks to advance its turnaround in 2021 after last year's strong sales growth.

Starting Tuesday, the Yum Brands chain will be selling four varieties of Detroit-style pizza for a limited time, with prices beginning at $10.99.

Detroit-style pizza is characterized by its rectangular shape, thick crust, edge-to-edge cheese and tomato sauce that covers the cheese and other toppings. The pizza has been growing in popularity in the last decade as Michiganders opened up pizzerias elsewhere in the U.S. Little Caesars, which is privately owned and headquartered in Detroit, was the first national pizza chain to take the trend to the masses in 2013.

Buddy's Pizza is credited with creating the dish 75 years ago, using blue steel pans from the local automotive factories. In 2018, CapitalSpring, a private equity firm that specializes in restaurant brands and franchisees, invested an undisclosed amount in Buddy's to help it capitalize on the trend by expanding nationwide.

Detroit pizza is only on 0.4% of restaurant menus, according to Datassential, which tracks food and beverage trends. But since 2016, its menu penetration has surged by 150%, with most of its growth occurring last year.

Graves said Pizza Hut customers expect the chain to give their own takes on food trends and were asking for a Detroit-style pizza.

"I have never seen our franchisees more excited for a launch," he said.

The chain spent more than a year on perfecting its own version and even created a new tomato sauce that will only be used on that type of pizza.

The launch comes as the pizza category nears a year in surging demand, stemming from the coronavirus pandemic. Pizza Hut and its rivals Domino's Pizza and Papa John's all reported same-store sales growth in the U.S. during the second and third quarters of 2020. For Pizza Hut in particular, the crisis has helped accelerate its transition to more delivery and takeout sales and fewer dine-in customers.

Shares of Yum are roughly flat in the last year, giving it a market value of $31.8 billion. The company's U.S. locations have bounced back relatively quickly from the coronavirus pandemic, but its international restaurants have seen a slower recovery. 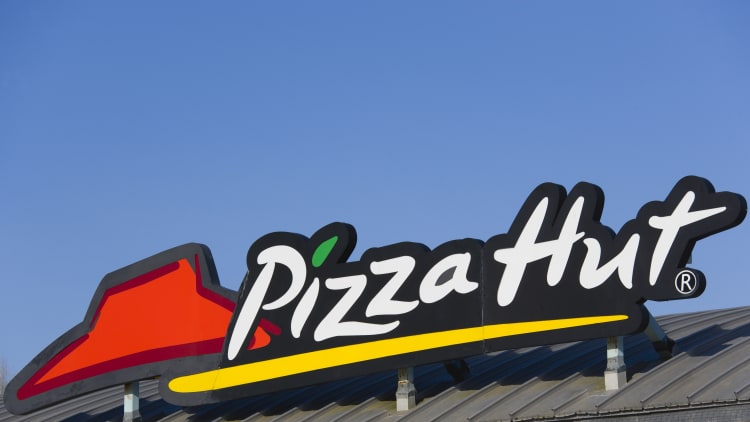