BEIJING — Big investors are pouring money into warehouses in Europe as online shopping for goods — some all the way from China — takes off in the wake of the coronavirus pandemic.

E-commerce was already growing before the emergence of Covid-19 forced people to stay home and storefronts to close. Now, the pandemic has likely sped up the pace of e-commerce adoption by about 12 months, real estate consultancy Savills said in a December report citing the Centre for Retail Research.

One of the biggest challenges for businesses wanting to take advantage of the trend is finding ways to fulfill orders more quickly. Companies that once relied on supply chains spread around the world face a shortage of shipping containers, resulting in high delivery costs and long wait times.

The new strategy is finding warehouses near customers and stocking them ahead of time, so shoppers can get their orders in just a few days or less.

That's caused a surge in warehouse demand, driving vacancy rates in Europe to a record low of around 5% — and the rate is still falling, said Marcus de Minckwitz, director of the omnichannel group in London for Savills.

"Throughout the course of 2020 we saw record take-up of warehouse space in the continent, led by the U.K.," he said. "Drivers of that have been Amazon and then third-party logistics providers."

Total investment in European logistics last year rose to 38.64 billion euros ($46.5 billion), the highest on record since 2013, according to Savills.

Alibaba has been expanding its cross-border e-commerce business, primarily through its AliExpress platform and Cainiao logistics arm.

The company cited rapid growth in cross-border e-commerce as contributing to a 51% year-on-year surge in Cainiao's revenue to $1.74 billion in the last three months of 2020. Revenue from international commerce wholesale rose 53% to $577 million during that time, according to Alibaba.

Some of the biggest firms in the investing world are taking note of the trend.

Chinese authorities are also talking up the impact on trade.

Cross-border e-commerce between China and other countries surged 31.1% last year to 1.69 trillion yuan, primarily in exports, according to the national customs agency. As a result, overseas warehouses rose 80% from a year ago to more than 1,800 in 2020, the Commerce Ministry said in January. 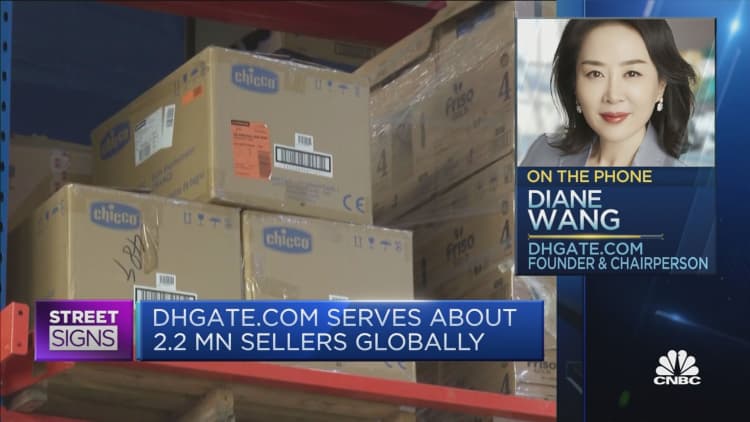 Diane Wang, founder and chairperson of Chinese e-commerce site DHgate, said last month the company has 10 warehouses overseas and would like to add more in Europe, particularly in the U.K. and France.

About half of products are pre-stored abroad so customers can receive their orders in about three days, she said. Wang expects cross-border e-commerce will grow from about 5% of China's international trade to 30% in the next decade.

No official data by country or region was available, but anecdotes indicate much of the overseas interest in e-commerce with China comes from Europe. The region is already one of China's top trading partners.

"A lot of people are buying the Chinese products in Europe," said Suresh Dalai, senior director at consulting firm Alvarez & Marsal, which focuses on retail operations in Asia. He expects more investment in technology for tracking orders, same-day delivery and storing packages in centralized lockers so consumers can pick up parcels at their convenience.

"There is a lot of demand to go around. I don't think (new Chinese players) really impacts Alibaba that much," Dalai said. "I think it helps because it just spurs additional investment in warehouses and technology, and more and more consumers get used to shopping cross-border, and shopping on Chinese-created websites."

Correction: This story was updated to reflect that DHgate would like to add more warehouses in Europe. A previous version mischaracterized the potential expansion.