Beyond Meat "Beyond Burger" patties made from plant-based substitutes for meat products sit on a shelf for sale in New York City.
Angela Weiss | AFP | Getty Images

Beyond Meat on Thursday announced that it has struck deals with fast-food giants McDonald's and Yum Brands, but shares fell on a disappointing earnings report.

The company posted a bigger-than-expected quarterly loss as the cost of global expansion and weak restaurant sales weighed on the business.

The company's stock whipsawed in extended trading, initially falling on the earnings news, then rising on the supply agreement, driven by hopes that the new restaurant deals will fuel growth. Recently, shares were down about 3%.

Here's what the company reported compared with what Wall Street was expecting, based on a survey of analysts by Refinitiv:

Excluding expenses attributed to the pandemic, Beyond lost 34 cents per share, wider than the loss of 13 cents per share expected by analysts surveyed by Refinitiv.

Net sales rose 3.5% to $101.9 million, missing expectations of $103.2 million. U.S. grocery revenues climbed 76% in the quarter, although the company noted that retail demand has moderated since the early stages of the crisis.

CEO Ethan Brown said that Beyond is still the top plant-based meat alternative in grocery stores, based on IRI data.

On the other hand, U.S. foodservice revenue tumbled 42.6% during the fourth quarter as the pandemic continued to weigh on restaurant demand for meat substitutes. But the years-long partnerships with McDonald's and Yum show that restaurant companies still believe consumers want plant-based alternatives.

Under the new three-year deal with McDonald's, Beyond will be the preferred patty supplier for its McPlant burger, which is being tested in some markets globally. McDonald's and Beyond will also work together to develop new substitutes for pork, chicken and egg.

Likewise, Beyond and Yum will work together to make exclusive menu items for KFC, Taco Bell and Pizza Hut over the next several years. Financial terms for both strategic partnerships were not disclosed.

Executives declined to elaborate further on the financial impact of the two partnerships during the conference call. However, Brown told analysts that the impact of the deals in 2021 is expected to be "fairly modest."

"These deals are enormous," Brown said. "They are the biggest deals you could possibly put together in food in our sector. And we don't want people to get ahead of themselves."

He also declined to provide more detail on its joint venture with PepsiCo, which was created to produce and distribute plant-based drinks and snacks.

The deals also come as Beyond tries to position itself as a global player. Its international revenue fell 16.5% during the quarter, dragged down by declines in its foodservice segment. The company noted that it spent more on expanding in Europe and China.

Other costs of the growing business included an increased headcount as it adds to its workforce, spending more on marketing and development and investments in its information technology infrastructure.

Brown also said that the company will release two updated versions of its meatless burger patties this spring. Both are its juiciest burgers yet, according to Brown, and one will boast 55% less saturated fat than a traditional 80/20 beef patty. The other, consistent with its current iteration, will contain 35% less saturated fat.

Beyond Meat declined to provide an outlook for 2021, citing the uncertainty caused by the pandemic. 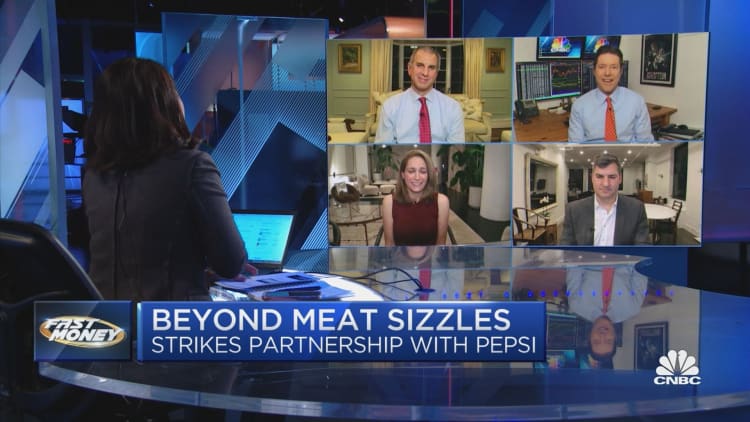