Lyft is seeing a recovery in ridesharing sooner than it had expected.

In a filing with the SEC Tuesday, the company said that improving trends will allow it to narrow losses in the current quarter by more than expected.

Lyft now expects to manage its adjusted EBITDA loss in the first quarter to $135 million, from the $145 million to $150 million it previously forecast.

The revised forecast comes on the back of an increase in ridesharing. The company said in the filing that the last week of February was its best week in terms of volume since pandemic lockdowns began in March of 2020.

Share of Lyft jumped about 8% after hours following the announcement from the company.

Additionally, Lyft expects the recovery to continue into this month and show positive year-over-year growth in ridesharing volume for the second half of March.

Uber CEO Dara Khosrowshahi told Morgan Stanley's Tech conference Monday that he expects its mobility business to see some signs of recovery in the U.S. and Europe, but cautioned it was "too early to tell."

Even as ridesharing volumes plummeted amid the pandemic, Uber and Lyft, the two main U.S. players in ridesharing, have committed to become profitable by the end of 2021 on an adjusted EBITDA basis.

But while both companies have aggressively cut costs over the last year, their strategies have been different.

Uber has spun off its more unprofitable businesses and made big bets in the food delivery space in an effort to replace revenue lost from ridesharing. Lyft has kept its focus on ridesharing and looked toward a reopening of the broader economy. Late last year, it said it was exploring a delivery service, but one that would be enterprise-facing.

Shares of both companies have rebounded from last year's lows, with Uber up more than 60% over the last 12 months and Lyft up 50%. 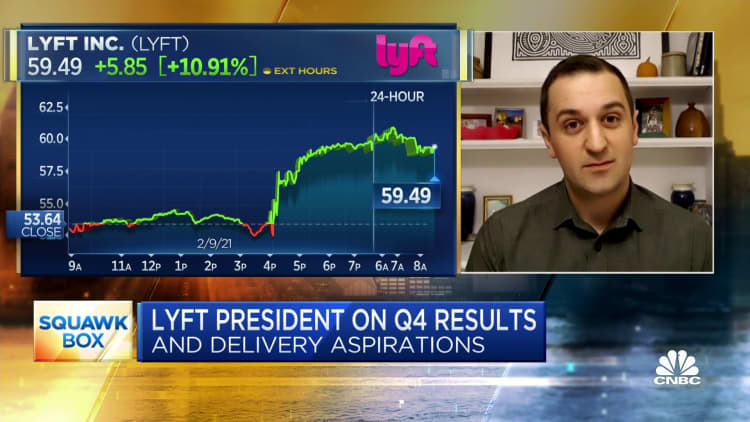