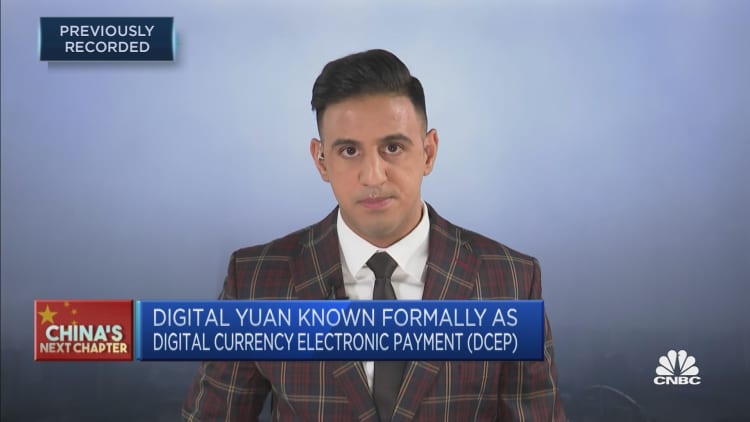 GUANGZHOU, China — China is arguably leading the world in developing a national digital currency, a project it has been working on since 2014.

The People's Bank of China (PBOC) has been spearheading work on the digital yuan, a so-called central bank digital currency (CBDC) that aims to replace some of the cash in circulation.

Real world trials are already underway in the world's second-largest economy. Here's what we know so far about the digital yuan or its official name — the Digital Currency Electronic Payment (DCEP).

What is the digital yuan?

It's effectively a way for the central bank to digitalize bank notes and coins in circulation. The Chinese market is already very advanced in cashless payments. The digital yuan would be a way to speed that process up.

It will be legal tender in China and no interest will be paid on it.

"The use of cash is decreasing. Eventually cash will be replaced by something in digital format. That is one of the big drivers behind this," Yan Xiao, project lead for digital trade at the World Economic Forum, told CNBC.

Why is it being introduced?

Fan Yifei, deputy governor of the PBOC, said last year that there is a "pressing need to digitalize cash and coin" as producing and storing these currently is expensive. In an article in state-backed publication Yicai Global, Fan said cash and coins are not easy to use, they're easy to counterfeit and because of their anonymity, could be used for illicit purposes.

The PBOC sees a number of other benefits to the digital yuan.

In a separate article, Fan outlined how a CBDC could make payments more efficient and improve the transmission of monetary policy. Fan also argues that a digital yuan could help with financial stability through a system of "controllable anonymity." This is where the payments would be anonymous to some degree, but data analysis tools could help the central bank catch illegal activities.

Another reason behind the PBOC's efforts could be to increase competition in the payments space and reduce systemic risk. China's digital payments arena is dominated by Alipay, which is run by Alibaba affiliate Ant Group, as well as WeChat Pay, run by internet giant Tencent.

"The existing system is owned by private companies. Should Alipay or WeChat pay goes bankrupt, which is extremely unlikely, it creates systematic risk," Linghao Bao, analyst at Trivium China, told CNBC. "The biggest reason for them (the PBOC) to do this is to level the playing field. Another reason is maybe create a new platform payments system that will increase efficiency."

How will the digital yuan work?

There are two aspects to the question: distribution and then eventually how it will be spent.

Distribution will be conducted via a so-called two-tier system. That means the PBOC will distribute the digital yuan to commercial banks. The commercial banks will be responsible for getting the currency into the hands of consumers. This could include services to allow consumers to exchange their coins and cash for digital yuan.

China has already given away millions of dollars worth of the digital currency in real-world trials in a number of cities including Shenzhen, Chengdu and Suzhou. These involve the local government handing out a certain amount of yuan via a lottery. Users usually have to download a separate app to receive the currency. JD.com, one of China's biggest e-commerce players, was involved in the trial and allowed customers to purchase items with the digital yuan.

A man counts 100 RMB notes with the Chinese flag in the background.
Sheldon Cooper | SOPA Images | LightRocket via Getty Images

At this point, it's unclear how users might actually hold and spend digital yuan when it is rolled out nationwide. The most popular form of mobile payment in China relies on so-called quick response (QR) codes. Users can display this barcode in their Alipay or WeChat app in a store and the merchant will scan it.

WEF's Xiao says it's likely commercial banks could integrate similar functionality into their apps. And that Alipay and WeChat Pay could have a section of their apps dedicated to digital yuan. Meanwhile, smartphone makers could also create digital yuan wallets for their devices.

"It will be interesting to see how phone companies seize the opportunity to become payments player in the market," Xiao said.

The PBOC's Fan also said that commercial banks already have the infrastructure to distribute the digital yuan and it's better that they do it rather than the central bank.

"To build a separate system would be a tremendous waste of such existing resources," he said.

So is this designed to compete with the tech giants?

In some regard, it's designed to increase competition with Alipay and WeChat Pay but not to totally replace them.

"The way I see it is digital yuan is not direct competitor to Alipay or WeChat Pay but a new platform that allows other players to come in and compete with WeChat and Alipay," Trivium China's Bao said. "Those could be commercial banks or other payment companies."

The PBOC's Fan also said the proposed two-tier model can help to "avert disintermediation in the financial sector" because the central bank will not be competing with the commercial banks.

No. Bitcoin is a so-called decentralized cryptocurrency. That means that it is not controlled by any central authority like a central bank, unlike the digital yuan which will be issued by the PBOC.

Bitcoin is also built on a technology known as blockchain. It's unclear at this point what kind of technical make up the digital yuan would have.

Proponents of bitcoin also tout the anonymity of the digital currency. 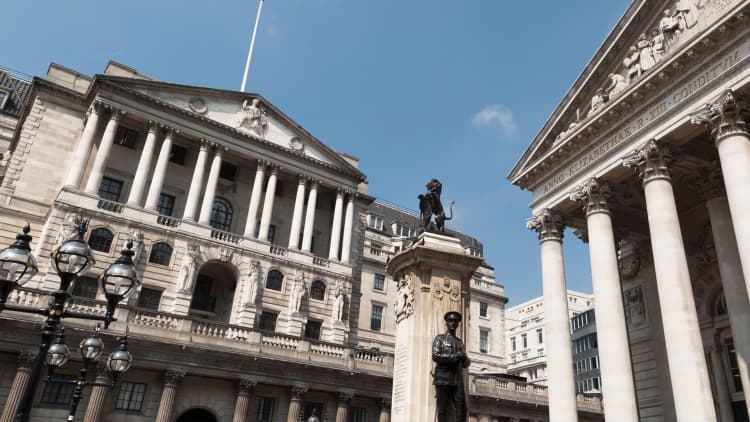 The PBOC's Fan said the digital yuan would have "controllable anonymity." This would involve those operating digital yuan wallets to disclose transactions to the PBOC as the "sole third party." Users would have a "loose coupling of accounts" which means that their current bank account may not necessarily be closely linked to their digital yuan account.

It could be based on a phone number, according to WEF's Xiao.

The PBOC says agencies operating digital yuan services should "submit transaction data to the central bank via asynchronous transmission on a timely basis." That would allow the PBOC to "keep track of necessary data" in order to crack down on money laundering and criminal offenses.

Some commentators have raised concerns however that the digital yuan could be used to increase surveillance on citizens.

China has been pushing the internationalization of the yuan and some commentators have seen the digital yuan as a way to do that.

But currently, the digital currency has a domestic focus and international use is "not the immediate priority," according to Trivium China's Bao.