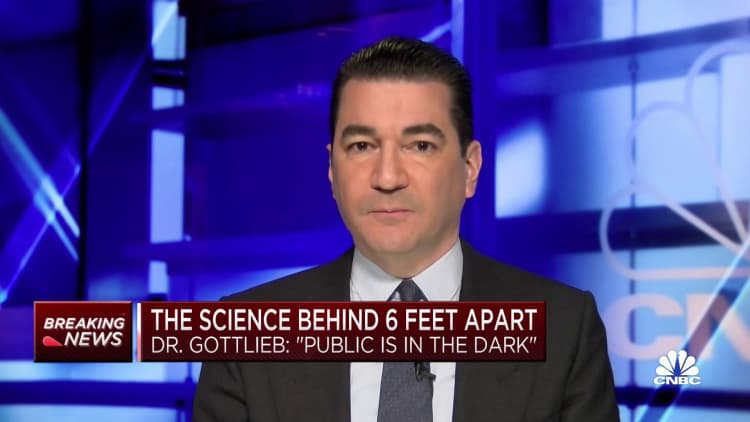 The Centers for Disease Control and Prevention needs to adapt its Covid recommendations more nimbly when new science arises, Dr. Scott Gottlieb told CNBC on Monday, adding the agency also needs to do so with more transparency.

"These guidelines have more impact on the economy than regulation" but go through much less public scrutiny, the former Food and Drug Administration commissioner said on "Squawk Box."

Gottlieb's comments came after the CDC on Friday changed its guidelines on social distancing at schools, not society at large. The public health agency said with universal masking most students can sit 3 feet apart, instead of the prior protocol of 6 feet. The CDC also continued to recommend at least 6 feet of distance between adults in schools and between adults and students.

In an opinion article in The Wall Street Journal on Sunday, Gottlieb urged the CDC to be more forthcoming about the science behind its guidelines, writing that the "exact basis for its initial view to stay 6 feet apart" remains unclear. In the Journal and on CNBC, he said initial recommendations and precautions early last year were based on the novel coronavirus spreading like seasonal influenza.

"It was reasonable to do that because we didn't know a lot about the coronavirus so we assumed it was going to behave like flu. It has not behaved like flu," Gottlieb said on "Squawk Box," contending it led health officials to "both overestimate and underestimate this virus" in crucial ways.

"It isn't so much a question of: Were we wrong about that? We were wrong in certain respects. But: Did we learn quickly enough and did we adapt our recommendations and guidelines quickly enough? And the answer is no," said Gottlieb, who led the FDA from 2017 to 2019 in the Trump administration.

In a statement to CNBC, a CDC spokesperson said that during "the first year of the pandemic, there were concerns about some of CDC's guidance." However, the spokesperson said the agency's new director under President Joe Biden, Dr. Rochelle Walensky, has "pledged to restore scientific credibility and the public's trust in the agency," noting that has included a review of the agency's Covid guidelines to ensure they reflect the latest science.

We underestimated the role of air quality and high-quality masks because we underappreciated that this was spreading through aerosol transmission.
Dr. Scott Gottlieb
Former FDA Commissioner

Gottlieb said on CNBC that health officials "overestimated the utility of physical distancing because flu spreads predominantly through droplet transmission, and we know droplets don't spread more than about six feet." On the other hand, he said, "We underestimated the role of air quality and high-quality masks because we underappreciated that this was spreading through aerosol transmission."

Initially, there had been some skepticism from doctors about whether advising Americans to wear a face covering — particularly something homemade like a scarf or bandana — would be effective. In early April of last year, however, the CDC began recommending people wear them in public, especially in settings such as grocery stores where social distancing was harder to maintain.

There is little debate in the public health community now about the importance of wearing face masks, and some experts such as White House Chief Medical Advisor Dr. Anthony Fauci have even started advising that wearing two masks is likely more effective.

Back in October, the CDC acknowledged coronavirus spread can occur through airborne particles, which can "linger in the air for minutes to hours" and end up infecting individuals who were more than 6 feet away from each other.

On the CDC's webpage titled, "How COVID-19 Spreads," the public health agency says it "most commonly" does so through close contact between people within 6 feet.

"There is evidence that under certain conditions, people with COVID-19 seem to have infected others who were more than 6 feet away," the CDC adds. "These transmissions occurred within enclosed spaces that had inadequate ventilation. Sometimes the infected person was breathing heavily, for example while singing or exercising."

Areas where Covid risks were initially overestimated also included contaminated surfaces, Gottlieb told CNBC. The CDC in May 2020 — about two months after the World Health Organization declared the coronavirus a pandemic — updated its website to stress that the virus did not spread easily by a person touching a contaminated surface, according to NBC News.

Gottlieb acknowledged that in the early stages of a health crisis like the Covid pandemic, there can be a lack of quality information to use as a foundation for guidance.

The CDC spokesperson told CNBC that following the agency's recent review, "key learnings" have already been implemented, including "reviewing major guidance for potential updates at least every three months," as well as "improving clarity and usability."