Amazon issued an apology on Friday to Rep. Mark Pocan, D-Wis., after mocking his claim that the company's drivers are sometimes forced to urinate in bottles during delivery rounds as a result of the demands of the job.

"We know that drivers can and do have trouble finding restrooms because of traffic or sometimes rural routes, and this has been especially the case during Covid when many public restrooms have been closed," the company wrote in a blog post.

The apology came after the Democratic lawmaker last month condemned Amazon's working conditions and union-busting efforts. Approximately 5,800 workers at Amazon's warehouse in Bessemer, Alabama, are awaiting an upcoming union vote, which is set to begin on Tuesday. Amazon has opposed the historic unionization effort, while Pocan is among legislators who support it.

"Paying workers $15/hr doesn't make you a 'progressive workplace' when you union-bust & make workers urinate in water bottles," Pocan wrote in the March 24 tweet that set off the controversy.

Amazon responded by tweet: "You don't really believe the peeing in bottles thing, do you? If that were true, nobody would work for us. The truth is that we have over a million incredible employees around the world who are proud of what they do, and have great wages and health care from day one."

That exchange ignited a series of criticisms and a story from the Intercept detailing how Amazon managers frequently voiced concerns during meetings and in policy documents and emails about the issue of workers urinating while on delivery.

Amazon on Friday described its tweet as an "own-goal" because it did not account for the company's large driver population and instead focused on its fulfillment centers. The company also said the tweet didn't "receive proper scrutiny" and was incorrect, acknowledging that drivers do have difficulty finding restrooms.

"Regardless of the fact that this is industry-wide, we would like to solve it," the company said. "We don't yet know how, but will look for solutions." 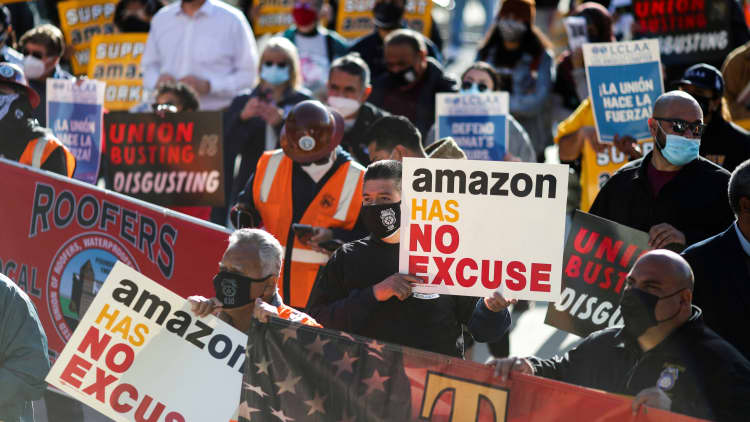