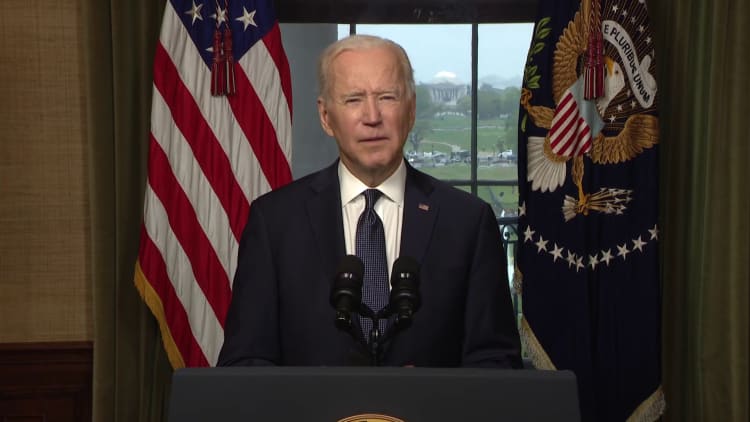 The removal of approximately 3,000 American service members coincides with the 20th anniversary of the Sept. 11, 2001, terror attacks which spurred America's entry into lengthy wars in the Middle East and Central Asia.

"It is time to end America's longest war. It is time for American troops to come home," Biden said in his televised address from the White House Treaty Room, where former President George W. Bush announced military action against al-Qaeda and the Taliban in October 2001.

"I am now the fourth American president to preside over an American troop presence in Afghanistan. Two Republicans. Two Democrats. I will not pass this responsibility to a fifth," Biden said, adding that the U.S. mission would be solely dedicated to providing assistance to Afghanistan and supporting diplomacy.

During his address, Biden invoked the military service of his own son — Beau Biden, who deployed to Iraq for a year and later died of cancer in 2015. He is the first president in 40 years to have a child serve in the U.S. military and serve in a war zone.

The president said the U.S. achieved its objectives a decade ago when it killed Osama bin Laden, the leader of al-Qaeda — the terrorist group that launched the Sept. 11 attacks. Since then, the U.S. reasons for remaining in Afghanistan have become unclear as the terrorist threat has dispersed across the globe, Biden said.

"With the terror threat now in many places, keeping thousands of troops grounded and concentrated in just one country, at a cost of billions each year, makes little sense to me, and to our leaders," Biden said. "We cannot continue the cycle of extending or expanding our military presence in Afghanistan, hoping to create ideal conditions for the withdrawal and expecting a different result."

Biden said that he coordinated his decision with international partners and allies as well as Afghan President Ashraf Ghani and spoke to former President Bush. The withdrawal of U.S. troops will begin on May 1. Following his remarks, Biden said he would visit Section 60 at Arlington National Cemetery, the final resting place for Americans killed in Iraq and Afghanistan.

In a statement following Biden's speech, former President Barack Obama said the United States had "accomplished all that we can militarily and that it's time to bring our remaining troops home."

Ghani said he respects the U.S. decision to withdraw its forces and Afghanistan's military is "fully capable of defending its people and country."

Biden warned the Taliban that the U.S. would defend itself and its partners from attack as it draws down its forces over the coming months. The president said the U.S. would reorganize its counterterrorism capabilities and assets in the region to prevent the emergence of another terrorist threat.

"My team is refining our national strategy to monitor and disrupt significant terrorist threats, not only in Afghanistan, but anywhere they may arise, and they're in Africa, Europe, the Middle East and elsewhere," Biden said.

However, CIA Director William Burns acknowledged in testimony Wednesday before the Senate Intelligence Committee that Washington's ability to act on threats emanating from Afghanistan will be diminished by the U.S. withdrawal. Burns said some U.S. capabilities will remain in place.

"When the time comes for the U.S. military to withdraw, the U.S. government's ability to collect and act on threats will diminish. That's simply a fact," Burns said.

"It is also a fact, however, that after withdrawal, whenever that time comes, the CIA and all of our partners in the U.S. government will retain a suite of capabilities, some of them remaining in place, some of them that we will generate, that can help us to anticipate and contest any rebuilding effort," Burns said.

In February 2020, the Trump administration brokered a deal with the Taliban that would usher in a permanent cease-fire and reduce further the U.S. military's footprint from approximately 13,000 troops to 8,600 by mid-July last year.

By May 2021, all foreign forces would leave Afghanistan, according to the deal. The majority of troops in the country are from Europe and partner nations. About 2,500 U.S. service members are now in Afghanistan.

Under the agreement, the Taliban promised it would stop terrorist groups from using Afghanistan as a base to launch attacks against the U.S. or its allies and agreed to conduct peace talks with the central government in Kabul. Biden said the U.S. would hold the Taliban to its commitments.

"We'll hold the Taliban accountable for its commitment not to allow any terrorist to threaten the United States or its allies from Afghan soil. The Afghan government has made that commitment to us as well, and we'll focus our full attention on the threat we face today," Biden said.

However, the peace process suffered a setback this week when the Taliban said it will not attend a summit on Afghanistan in Turkey scheduled for later this month and will not attend any conference until foreign forces leave the country.

The announcement to leave Afghanistan comes on the heels of a Wednesday meeting between NATO allies and Secretary of State Antony Blinken and Secretary of Defense Lloyd Austin. NATO joined the international security effort in Afghanistan in 2003 and currently has more than 7,000 troops in the country.

"Our allies and partners have stood beside us shoulder to shoulder in Afghanistan for almost 20 years and we are deeply grateful for the contributions they have made to our shared mission," Biden said. "The plan has long been in together and out together."

NATO Secretary Jens Stoltenberg said Wednesday from the alliance's headquarters in Brussels that the "drawdown will be orderly, coordinated and deliberate."

"We went into Afghanistan together, we have adjusted our posture together and we are united in leaving together," Stoltenberg said, adding "any Taliban attacks on our troops during this period will be met with a forceful response."

The NATO mission in Afghanistan was launched after the alliance activated its mutual defense clause — known as Article 5 — for the first time in the wake of the 9/11 attacks.

The wars in Afghanistan, Iraq and Syria have cost U.S. taxpayers more than $1.57 trillion collectively since Sept. 11, 2001, according to a Defense Department report. More than 2,000 U.S. service members have died in Afghanistan. 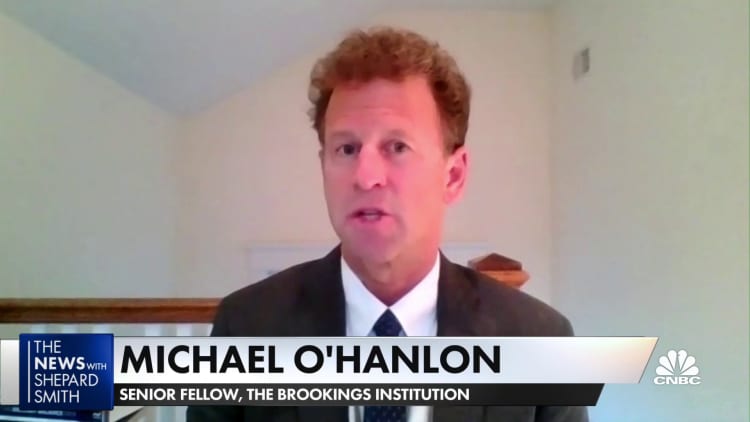