Many of those with the largest megaphones about the importance of mitigating climate change are white: Bill Gates, Elon Musk, Joe Biden, John Kerry, Greta Thunberg, Al Gore, and more recently, Jeff Bezos, to name few.

But the effects of climate change often hit people of color the hardest.

CNBC Make It talked to a handful of notable Black climate leaders who have been doing remarkable work in the fight against climate change and its dangerous repercussions for decades. Here's what they have to say about why diversity and inclusion in the field of climate change science is so critical.

Hollis' work: Hollis oversees the development and implementation of programs to measure and track the health impacts of climate change on communities of color and other "traditionally disenfranchised" groups at the Union of Concerned Scientists, according to the organization's website. She is developing new research to understand how climate change affects health and makes policy recommendations "to foster inclusiveness and greater benefits to underserved communities." (Read more here.)

The diversity she has observed in her career: Hollis began her research on "issues related to health effects from ozone exposure" more than 30 years ago, she says. "During that time, there was very little or no diversity in related industries or companies, and very little in academic studies in general."

But Hollis herself chose to work with advocacy groups that included "Black, Brown and Indigenous people," she says. "In my experience, they are and were the first to engage around climate issues. I was not working with large advocacy groups – conservation organizations for example – that were not diverse at all."

Why Black people must be part of climate change work: In Mobile, Alabama, where Hollis grew up, "as I drive around my old neighborhood, I see the results of ... chronic flooding, homes boarded up and abandoned because of damage from severe weather events and contaminated environments that have caused cancers and other illnesses, and faulty infrastructure. I see the results of economic oppression, where people do not have the financial means to keep rebuilding or to move to an area that does not flood," she says.

"We have to be active. We have to step up and claim our space," Hollis says. "We have to fight to protect ourselves and each other. Or nothing will be done to stop the practices that place us at risk – at risk from extreme heat for example, like lack of access to greenspace like parks or to cooling centers. Or the effects that climate change has on agriculture, on the availability of healthy foods or access to food."

"It is literally a matter of life or death," Hollis says.

Washington's work: Now 84 years old, Washington was one of the first co-developers of atmospheric computer models in the 1960s. The computer models helped form modern understanding of climate change. He was a President of the American Meteorological Society and has had presidential appointments under the Carter, Reagan, Clinton, and Bush administrations. In 2010, he was awarded the National Medal of Science by President Obama. In 2019, Penn State named a building after Washington, honoring his accomplishment of becoming one of the first Black people to earn a doctorate in meteorology. (Read more here.)

The diversity he has observed in his career: "We didn't have very many people [of color] — African Americans, Hispanics and the Native Americans — in atmospheric and climate research," says Washington, who received his PhD in meteorology from Penn State in 1964.

"I personally, and a few others, actually visited many historically Black colleges in the South, including Howard University in Washington D.C., and over the years we added to the population of scientists involved in atmospheric research. We made some progress," he says.

Washington says at annual American Meteorological Society meetings, he spends time getting to know new and younger members. "Things are improving," he says. "But we have a long way to go."

Why Black people must be part of climate change work: "For a healthy society we ought to use all of our talents and different backgrounds and different schooling to contribute to some of our biggest problems," Washington says. "Diversity is a thing to always be worried about in a society — we ought to always have people coming in with different different views and different priorities."

Sanders' work: Sanders leads Our Climate, a Washington DC-based youth advocacy organization. Previously, she was a manager at HIAS, a Jewish American nonprofit organization that provides humanitarian aid and assistance to refugees, and she wrote legislative briefs for the U.S. House of Representatives Science, Space and Technology Committee. She is a former fellow at the DC-based lobbying firm Terpstra Associates, where she advocated for agricultural and environmental issues. (Read more here.)

The diversity she has observed in her career: "I have been a climate justice advocate for over a decade," says Sanders. "Witnessing Hurricane Katrina as a Black woman in Louisiana woke up something in my soul. But it wasn't until a few years later that I realized my gift was my voice and my purpose was to use it to raise awareness to the intersecting effects of climate change that disproportionately impact communities of color and other frontline communities."

A "concerted effort around diversity in companies, advocacy organizations and academics" has only really happened in the past three to five years, she says. "It's not that diverse individuals weren't around, but rather that we have been passed on, used and burnt out and/or not acknowledged."

Why Black people must be part of climate change work: "We are the most disproportionately impacted by climate change. You see climate risks don't just include the environmental and economical impacts, but they also comprise of health, racial, migration, food and security, housing, mental, socio-cultural. Black people experience unfair inequities in each of these impacts alone. Climate change only exacerbates the existing stressors of these inequities," says Sanders.

Bullard's work: Referred to as "the father of environmental justice," Bullard is a former Dean of the Barbara Jordan-Mickey Leland School of Public Affairs at Texas Southern University and now is a professor of Urban Planning and Environmental Policy there. He has written more than a dozen books on climate justice and is a member of the White House Environmental Justice Advisory Council. His work started when his wife, Linda McKeever Bullard, asked him to conduct a study for her class-action lawsuit, Bean vs. Southwestern Waste Management Corporation, a seminal case for environmental civil rights justice. Bullard's study, published in 1979, "documented that Black America is segregated and so is pollution and individuals who contribute least to environmental problems suffer the pain first, worst and longest," Bullard tells CNBC Make It. (Read more here.)

Robert D. Bullard, referred to as "the father of environmental justice," is the former Dean of the Barbara Jordan-Mickey Leland School of Public Affairs at Texas Southern University and now is a professor of Urban Planning and Environmental Policy there.
Photo courtesy Robert Bullard

The diversity he has observed in his career: Since the late '70s, Bullard, now 74, has seen incremental change, he says. But "frontline communities near polluting industries still find themselves on a unlevel playing field," he says. "Race is still the most potent predictor, more powerful than income, of who gets polluted and who gets help."

As for environmental groups, which Bullard says are largely still white, "some baby steps have been made in diversifying their boards and staffs in recent years. However, less progress has been made in diversifying the green dollars that flow to people of color environmental and climate justice organizations, networks and consortia that serve the most impacted populations and communities," he says.

Why Black people must be part of climate change work: The modern civil rights movement and the environmental justice movement "were both birthed in Southern United States with strong Black-led organizations," Bullard says.

"Black people must step up and lead on this important quest for justice as we always have," he says. "Our Black youth and students must also lead as they have done in every social movement that's been successful in the country."

"The principle of environmental justice dictates that those most impacted by climate change must be in the room and at the table when plans, decisions and solutions are being developed," he says.

Mapp's work: Mapp is the founder and CEO of Outdoor Afro, a national not-for-profit organization which "celebrates and inspires Black connections and leadership in nature," according to its website. She oversees the selection and training of over 100 volunteers in 56 cities who lead outdoor events. Mapp was appointed to the California State Parks Commission in 2014 and in 2010, she was invited to the Obama White House to participate in the America's Great Outdoors Conference. (Read more here.)

And some of the "most pressing environmental conditions impact places where Black people live, such as sea level rise for coastal communities, poorer air quality caused by disproportionate exposure to emissions in cities, and droughts conditions that compromise access to clean water," she says.

Jenkins' work: Jenkins is a meteorology professor at Penn State University and director of the Alliance for Education, Sciences, Engineering and Development in Africa in the College of Earth and Mineral Sciences. He is studying how lightning and mineral dust aerosols affect ozone in regions downstream of continental Africa, how climate change patterns affect West Africa, and how weather hazards such as Saharan dust storms and tropical cyclone affect various communities. He was the recipient of the National Science Foundation Early Career Development award and from Sept. 2003 through May 2004, he received a grant from the Fulbright U.S. Scholar Program to study climate change in West Africa. (Read more here.)

The diversity he has observed in his career: As a young man, Jenkins, now 57, became interested in what was causing drought in West Africa and studied climate in graduate school. During that time the world of climate change was "largely white and male," and it was often isolating, he says (though Warren Washington was his mentor).

And while things like conferences have become more diverse in recent years, "the Universities have been very slow to respond with woefully low representation in the climate sciences, geosciences, and STEM in general," he says. "We need more young people of color to pursue research that can be used for policy and to serve as role models."

Why Black people must be part of climate change work: Jenkins says there are many people of color who are ready to tackle climate change, but "we need to provide the space for them to run, learn and research climate change.... Bring me the students who want to learn, and I will download all of my knowledge to them," he says.

People of color also need to "be in our communities talking about how we can all offset the climate crisis through individual and community actions," he says, including solutions like developing urban gardens, promoting green technologies and jobs, recycling and consuming less.

IBM is one of 20 companies joining The Climate Pledge, Amazon and Jeff Bezos' carbon commitment

'Green' jobs in Biden's infrastructure bill: What they could pay and how to be eligible 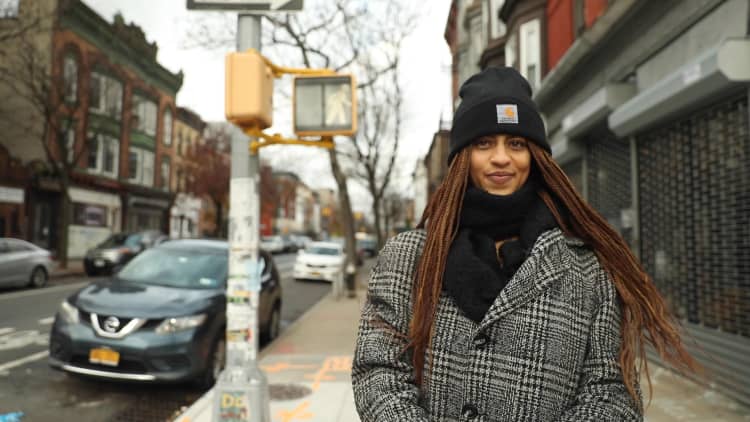 Check out: Meet the middle-aged millennial: Homeowner, debt-burdened and turning 40