The Covid-19 pandemic has not been the job crisis the Great Recession was for older workers. But that doesn't necessarily mean it's easier for people in that age cohort to find new work.

In fact, April 2020 saw the biggest gap ever in the unemployment rate between workers 65 and up and those ages 25 to 54.

Today, the numbers for older workers do not look as dire.

The labor force participation rate for workers 55 and over has held steady in recent months, according to the most recent jobs report.

However, workers in that age cohort are increasingly falling into the category of long-term unemployed, which means they have been seeking work for 27 weeks or longer.

Since March, more than half of job seekers ages 55 and up fit that classification, according to Jennifer Schramm, senior strategic policy advisor at AARP.

"It's still pretty hard for older job seekers, and many of them have been out there looking for quite a while now," Schramm said.

"The longer someone is out of work, the more likely they are to potentially give up and just leave the labor force entirely," she added. 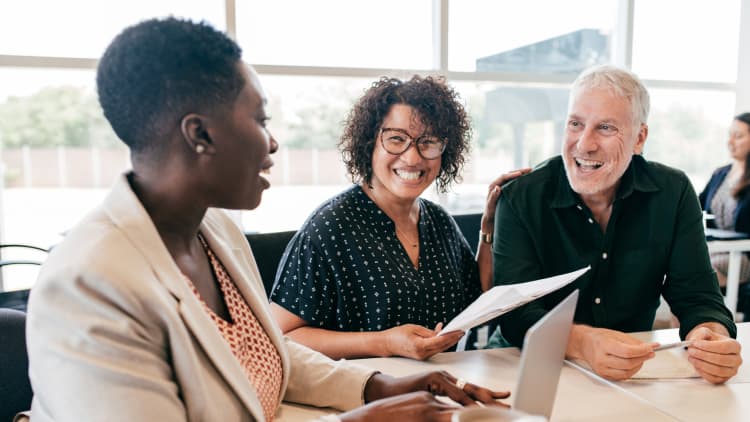 That raises the question of whether Covid-19 has caused older workers to retire earlier than they might have otherwise planned.

In most recessions, there is an increase in the number of older workers who feel compelled to retire. However, those workers may eventually decide to re-enter the work force.

"We'll have a better picture of the types of retirement decisions people made as more time goes by," Schramm said.

The Center for Retirement Research at Boston College published a report earlier this year that declared, "Covid-19 is not a retirement story."

Some people will have retired early because of the recession, but I don't think it's going to have lasting impact on the trends.
Alice Munnell
director at the Center for Retirement Research

Older workers in the labor market were not disproportionately harmed by the downturn, the Center for Retirement Research found.

One reason for that is that older workers were just as likely as younger workers to have jobs that can be done remotely. However, the less educated workers were, the more likely they might be adversely affected, according to the research.

"I think some people will have retired early because of the recession, but I don't think it's going to have lasting impact on the trends, and the numbers are small," said Alicia Munnell, director at the Center for Retirement Research.

For older workers who do decide to seek new positions, one concern — age discrimination — may be especially top of mind now.

A recent AARP survey found 78% of workers have either seen or experienced age discrimination in the work place.

"That number is higher than we've ever seen it," Schramm said.

That follows another AARP survey that found 44% of older workers who are concerned about their job security worry their age could negatively affect their job search.

"When we see such a high number of people experiencing age discrimination, it suggests that it's a pretty serious challenge for a lot of people," Schramm said.