Barbarett Corbbins was relieved when she saw an extra $500 deposited into her bank account last week.

She had received letters from the IRS that she was eligible for child tax credit payments for her two children, ages 10 and 17, but had forgotten when the money was to arrive. When she finally checked her balance the second week of July, on the advice of a friend, she saw she got $250 per child.

"I was like 'Amen,'" said Corbinns, who lives in Wheeling, West Virginia, with her kids. She's been on medical leave from her job as a registration specialist at West Virginia University hospital since December and isn't sure when she will be able to return. She will keep getting the $500 payment each month through the end of the year.

More from Invest in You:
Holding too much cash isn't growing your personal wealth
Many Americans think kids will be financially worse off than parents
Here's how Black Americans can begin building wealth right now

"I'm not working, so it's definitely going to help me continue to provide for my children and have the additional income that I need to take care of our bills and everything." Her monthly electric bill alone is about $370, she said, and so she's looking forward to having the extra cash to help with such expenses.

Anything left over will go to savings, Corbbins said, which she was able to augment with the stimulus checks sent to her family over the course of the last year and a half.

Cutting poverty in half 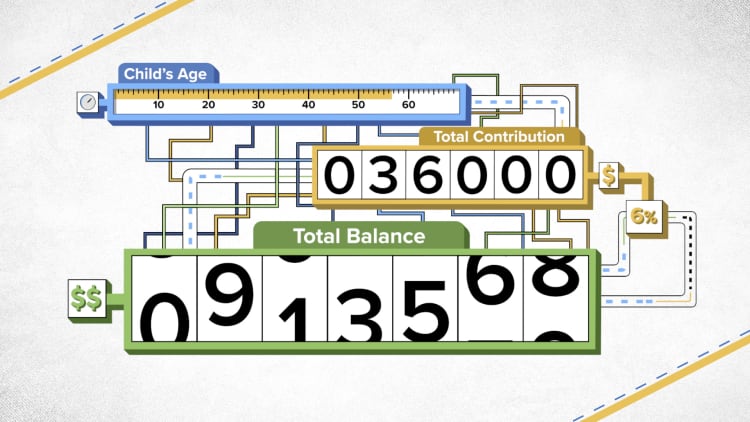 watch now
VIDEO1:4901:49
Child tax credit: How much your children will get if you invest it every year
Invest in You: Ready. Set. Grow.

Last week, more than 35 million families with 60 million children got the first child tax credit payments from the federal government. Roughly $15 billion was sent, according to the U.S. Treasury Department and the IRS. The average payment was $423, meaning some families got more and some less.

The payments come from the enhanced child tax credit, part of the American Rescue Plan signed into law by President Joe Biden in March. The act boosted the existing child tax credit to $3,000 from $2,000 and added a $600 bonus for kids under the age of 6 for the 2021 tax year.

Half of the credit is being distributed to families in monthly installments from July to December — for families receiving the full credit, it will be $300 per month for children under age 6 and $250 per month for those from 6 to 17.

What is really necessary right now is a ton of outreach and a ton of education to jobs and communities and low-income families.
Arohi Pathak
director of policy at the Poverty to Prosperity program at the Center for American Progress

While the credit goes to some 90% of children, it's most helpful to lower-income households that may struggle to save or have been hit hard by the coronavirus pandemic. Studies show it may cut child poverty rates in half.

"It came right on time," said Lafleur Duncan, 53, of Brooklyn, New York, who used the first payment to buy her 13-year-old son new clothes. The future money will also help the family pay for rent after both Duncan and her husband lost work during the pandemic.

About 86% of those who got the first payment did so through direct deposit, according to the IRS. The remainder, like Marla Snead, 52, who lives with her 14-year-old daughter Carlee Turner in Chesapeake, West Virginia, received paper checks. As soon as the check arrived, she and her daughter ordered new school clothes online.

Snead was ecstatic to get the check, she said, and the money will be a big help over the next few months.

"It was a sigh of relief," said Snead.

The program hasn't been without issues, however. Laurynn Vaughn, 37, is eligible for and should have received payments for her daughters aged 4 and 5.

But the money still hasn't come, said Vaughn, who runs a daycare in Kissimmee, Florida, and is also a notary and process server. When she checked with the IRS online portal, it said it was still pending, but didn't give any further information as to why; Vaughn filed her 2020 and 2019 taxes on time and is within the income brackets, she said.

"I'm waiting to see what happens, but I'm trying not to think about it or consider it because, you know, if I'd been in a situation where I desperately needed [the money], it would've been a problem," said Vaughn.

Laurynn Vaughn isn't counting on the child tax credit payments that should be sent to her two daughters, ages 4 and 5. When the money comes, she said she'll save most of it.
Source: Laurynn Vaughn

Even if she isn't able to get the advance payments, she should be able to claim the full credit when she files her 2021 taxes next year.

How to ensure payment

If you didn't get the first payment and think you're eligible, there is still time to make sure you get the money in coming months. Those who traditionally don't file tax returns and didn't use the online IRS non-filer tool to claim stimulus checks can register through the agency's sign-up function.

Even if you sign up late, you'll still get the full advance credit through December, according to the IRS. It will simply come in larger monthly payments to catch up for what you missed.

Families can also update their information, such as where they'd like the payments sent, or opt out of receiving them to get the full credit when they file 2021 taxes next year. There will also be a way for people to return payments they may have gotten in error, according to the IRS. 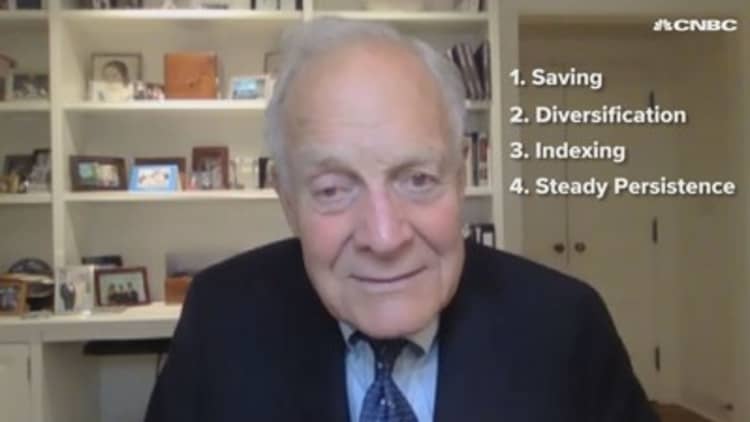 watch now
VIDEO3:5403:54
How to start investing according to legendary investor and author Charles Ellis
Invest in You: Ready. Set. Grow.

"The success of this program really is going to lie in the implementation," said Arohi Pathak, director of policy at the Poverty to Prosperity program at the Center for American Progress. "What is really necessary right now is a ton of outreach and a ton of education to communities and low-income families, particularly those who are not paying taxes."

A problem facing the IRS is that often those who need the money the most are the hardest to reach, including people who don't file taxes because they don't have enough earned income and have yet to claim multiple stimulus checks they're eligible to receive.

Democratic lawmakers are pushing to make the credit permanent. Biden has suggested at least expanding it for a few more years so that it doesn't abruptly stop in 2022.

"We're hoping this is permanent," said Joanna Ain, associate director of policy at Prosperity Now, a financial literacy nonprofit organization. "A lot of groups are working really hard to make this permanent."

SIGN UP: Money 101 is an 8-week learning course to financial freedom, delivered weekly to your inbox.

CHECK OUT: How to make money with creative side hustles, from people who earn thousands on sites like Etsy and Twitch via Grow with Acorns+CNBC.