When the COVID-19 pandemic forced millions of people to stay home from work or school throughout much of 2020, retailers saw spikes in demand for products that were especially popular among people cooped up in their homes.

That demand helped steer record profits to some retailers during the pandemic, including retail giants like Amazon and Walmart, as well as a 16-year-old high school student from Hopewell, New Jersey named Max Hayden.

Hayden ramped up his side-hustle of reselling items on Amazon and other online marketplaces in 2020 to the tune of six-figure profits. In fact, by specifically targeting products he knew would be in high demand and short supply at different points of the pandemic — from above-ground swimming pools in the summer to patio heaters last fall, but never pandemic necessities, he says — Hayden, a rising high school senior, was able to sell more than $1.7 million worth of products as a seller on Amazon Marketplace in 2020, in total.

And, when you take into account some of the other online marketplaces where he sold items, like Facebook Marketplace and Craigslist, Hayden pulled in more than $2 million in revenue last year reselling popular items.

After accounting for costs like shipping and the products' original retail prices, Max says he turned a total profit for the year of "roughly $110,000 for myself."

In September, Hayden officially registered his business as a Limited Liability Company, or LLC, called MH Book Store. He is now a 16-year-old CEO.

Max's business really took off at the beginning of summer in 2020, when demand for above-ground swimming pools surged amid the pandemic.
Source: CNBC Make It Video

Hayden may only be 16, but his entrepreneurial streak already goes back several years. He sold toys on eBay in the fifth grade and then, in middle school, he made money selling candy and fidget spinners to his classmates.

"Max has always had an entrepreneurial spirit," says his mother, Jennifer Hayden, who works as a client associate for a financial institution (Max's father, also named Max, is an architect). "He's had a love of money and he's very creative. And I think the two of those together is kind of what's landed him where he is today."

Hayden's current online reselling business really started back in 2019, beginning with popular resale products like sneakers. He started out with only about $300 of his own money.

"I started out with my birthday money, things like that," Hayden says, adding that he's never had to borrow money from his parents to fund his business.

In the past year, though, Hayden's business became supercharged. Many items he sells online go for double their retail price, Hayden says, but sometimes they can even fetch a markup of up to 400% if the product is in especially high demand, like when retailers sell out of an item completely.

On that front, Hayden gets help from the multiple groups he's joined on the messaging platform Discord where resellers share tips on what products to target and which retailers might still have a hot item in stock. The Discord group members pay monthly fees for membership, and Hayden says the cost typically ranges from $20 to $100 per month for each group, but it's worth it to get a leg up on other resellers.

Hayden says he often spends hours per day researching which products are reselling for significantly more than their retail prices, whether it's on Discord or studying the data Amazon Marketplace provides to its sellers.

"At the beginning of the pandemic, I sold things like Nintendo Switch consoles and webcams for people with kids so that they could work from home and attend school from home," Hayden explains. "A lot of these items were all selling out, as well as home exercise equipment and even sometimes sewing machines and bread makers, things that people were doing after they were stuck at home."

"After school and work, we'd go around to various Wal-Marts and Targets and [Max would] buy up as many pools as we could fit into the back of the car," Jennifer Hayden says.

Hayden is well aware that his business success has come at a time when many others have struggled amid the pandemic. But, at the same time, like other online businesses that thrived in 2020 (from giants like Amazon to small businesses that pivoted to focus on e-commerce), Hayden also feels like he simply saw a good business opportunity and seized it.

"The pandemic is really terrible and it's been a really challenging time for a lot of people — you know, I'm looking forward to the pandemic coming to a close. But, for me, I was able to take advantage of the opportunities that I saw throughout these past few months."

Hayden also says he is adamant about only selling products that can be considered luxuries.

"I've made a firm distinction not to sell anything that's immediately necessary, or [that] someone would need in order to protect themselves, like hand sanitizer and gloves," Hayden says, adding that this is what creates a distinction between resellers like himself and those who engage in the practice of price-gouging (like some Amazon sellers who were fined by the New York Attorney General's office for jacking up prices on hand sanitizer at the height of the pandemic).

Still, Hayden has faced criticism from customers online for selling sought after items at big premiums.

"There have been some people who see our advertisements and are angered by the price of the products and the low supply and the fact that they can't get a product for the retail price," Hayden says, referring to complaint messages he receives from customers through the Amazon Marketplace platform.

While he understands why anyone would be unhappy at paying premium prices, he believes he is simply responding to the twists and turns of the marketplace the way any seasoned entrepreneur would.

"I'm really just taking advantage of the market where the market drives the prices and the demand," he says.

Hayden's biggest expense with his business is buying inventory, which he typically buys products directly from retailers. Otherwise, his main costs are for shipping his sold products, packaging materials and marketplace fees.

"On Amazon, a typical transaction ranges anywhere from 8% to 15% in fees that Amazon takes as part of their commission," he says.

Other than that, "there are really no costs that eat into your profits too badly," says Hayden. He says he invests most of his profits back into the business.

Max's parents have let him use their two-car garage to store some of his business' inventory.
Source: CNBC Make It Video

As his business continued growing throughout 2020, Hayden hired two high school friends to work for him. He pays them both $15 an hour to help with bookkeeping, packaging and fulfilling orders. Hayden typically spends his morning reviewing messages from customers and orders, then spends the afternoon packaging items to ship out across the world.

Hayden has filled his parents' garage with boxes of inventory waiting to be resold or shipped out to customers (UPS typically makes a stop at his house every day to pick up loads of orders to ship out). He also splits a commercial warehouse nearby, sharing the rent with other resellers he met online.

This year, through the end of June, Hayden says he saw a little over $500,000 in revenue, while turning a profit of "$30,000 to $40,000." The reason he's bringing in less money this year is mostly academic. Hayden says it was "nearly impossible to balance" his business and his school work during his junior year of high school, so he decided to temporarily shut down for a few months this spring, before ramping back up at the start of this summer.

"I had to sacrifice some opportunity cost in terms of revenue and profit," Hayden says. "But, ultimately, I'd say my school success is a lot more important than my business success."

Hayden's business also splits the cost of rent for a commercial warehouse with other resellers he met online.
Source: CNBC Make It Video

While Hayden's mother says she's very proud of what he's done in building his business, she adds that she's "super proud of him for basically pulling the plug on the business in March and refocusing on school." She says Hayden improved his grades after a period that had been "a bit of a roller coaster in terms of his grades."

Hayden has taken a lot of inspiration from other young entrepreneurs he's learned from online over the years. When he was in middle school, Hayden says, "I watched videos on YouTube about other people who sell candy. And then I did it myself."

As he got older, he became interested in e-commerce and again went online to learn about what he calls "textbook business concepts like gross revenue versus profit margin [and] differential advantage over other companies."

"It's definitely a lot of learning that you can do online in terms of starting your business."

As far as learning goes, Hayden also still has his final year of high school to look forward to. He says that the hours per day that he spends focused on his business has forced him to "to learn a lot about prioritization and organization with my time" (he now keeps a calendar to plan out each day, hour by hour), but admits that it's still been hard to maintain an active social life.

"I've definitely had to put some plans on hold."

Max Hayden hired two of his high school friends to help with his business. They make $15/hour to help with tasks like bookkeeping and fulfilling orders.
Source: Jaime Granato

Hayden does have time to think about the future, though. He's hoping to lease a large commercial space that can serve as an exclusive warehouse for his business. But, Hayden also plans to attend college and wants to major in management information systems "because it kind of takes the world of data and computer science and merges it with the business world," he says.

With college on the horizon, Hayden's also thinking of ways he can keep the business going even if he's not physically around to manage it, whether that means hiring more employees or even "potentially grooming the business for a merger acquisition or maybe even a private equity investment," he says. 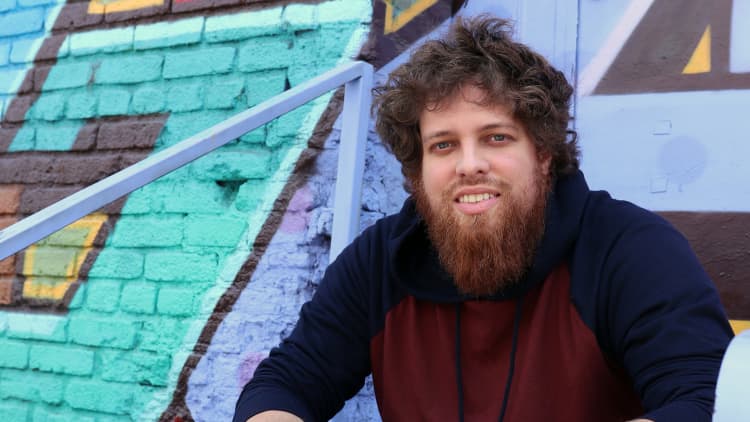 VIDEO7:2207:22
How I became an overnight dogecoin millionaire
Make It
Related Video 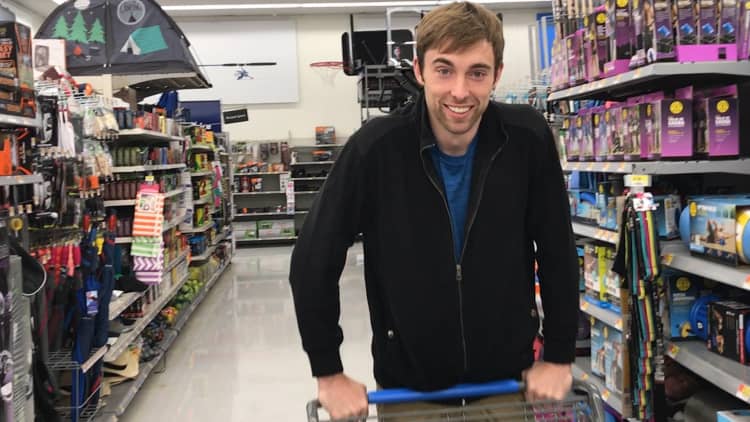 VIDEO1:4001:40
This 29-year-old's company makes millions buying from Walmart and selling on Amazon
Make It