Republican Rep. Mo Brooks of Alabama on Thursday responded to a bomb threat that forced the evacuation of numerous buildings on Capitol Hill by saying he understands "citizenry anger directed at dictatorial Socialism."

The statement quickly drew heated criticism of Brooks, who voted to overturn the election of President Joe Biden and is facing a lawsuit from Democratic Rep. Eric Swalwell of California, who accuses him of helping to incite the deadly Capitol invasion on Jan. 6. 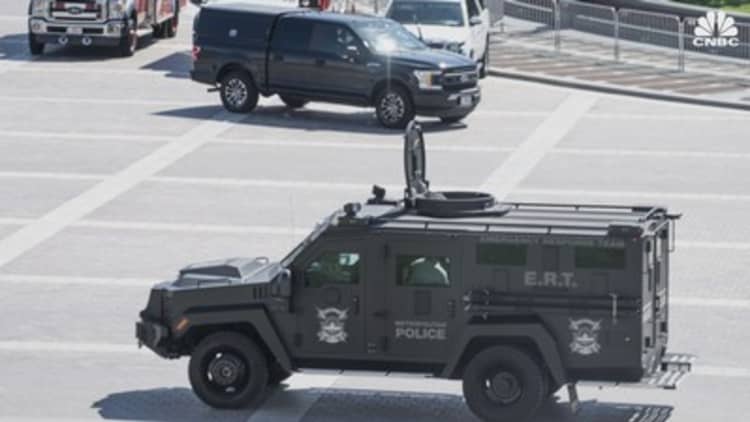 Rep. Adam Kinzinger, a Republican from Illinois, called Brooks' statement "evil" in a Twitter post. Kinzinger was one of a handful of Republicans to vote for former President Donald Trump's impeachment over the Capitol invasion.

The bomb-threat suspect, 49-year-old Floyd Ray Roseberry of Grover, North Carolina, surrendered and was taken into custody by police after an hourslong standoff outside the Library of Congress, where he sat in his pickup truck claiming he had explosives.

In social media videos posted to Facebook, Roseberry repeatedly referenced a "revolution" and called on Biden to send someone to talk to him.

Brooks in his statement said that "although this terrorist's motivation is not yet publicly known ... generally speaking, I understand citizenry anger directed at dictatorial Socialism and its threat to liberty, freedom and the very fabric of American society."

He added that the way to stop socialism is for "patriotic Americans to fight back" in upcoming election cycles.

"I strongly encourage patriotic Americans to do exactly that more so than ever before. Bluntly stated, America's future is at risk," Brooks' statement said.

Brooks, a House member since 2011 who is running for Senate, had plotted in late 2020 with Trump about ways to overturn Biden's Electoral College victory.

On Jan. 6, when Congress was set to convene at the Capitol to confirm Biden's win, Brooks spoke nearby at a rally organized by Trump, who called on Republicans to reject the election results.

At the "Stop the Steal" rally, Brooks told crowds of Trump's supporters to "start taking down names and kicking ass." Trump in his own speech told the crowd to march to the Capitol: "If you don't fight like hell, you're not going to have a country anymore," he said.

Shortly after Congress convened to confirm Biden's win, a mob of Trump's supporters stormed the Capitol, derailing the proceedings and forcing lawmakers to flee their chambers and hide. More than 500 arrests have since been made in relation to the Capitol riot. 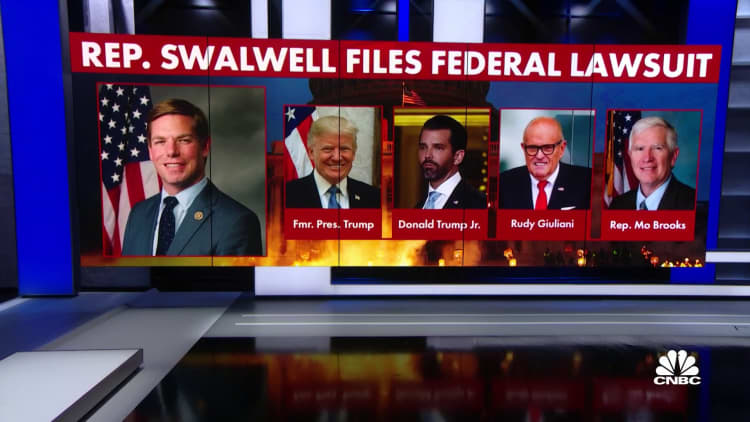 In March, Swalwell filed a civil lawsuit against Brooks and Trump, as well as Donald Trump Jr. and former Trump attorney Rudy Giuliani, accusing them of being "wholly responsible for the injury and destruction" caused by the mob.

Brooks has asked a judge to have him dismissed as a defendant in that lawsuit, saying in part that his speech at the Jan. 6 rally was delivered as part of his job as a congressman.

The bomb threat Thursday forced the evacuation of the Library of Congress, as well as the Supreme Court building, the Cannon House Office Building and the offices of the Republican National Committee. Congress was in recess, so fewer people were on the Hill.

Police negotiators began communicating with Roseberry, and sharpshooters took up positions in the area surrounding his pickup truck, which was parked on the sidewalk outside the government building. He eventually stepped out of his truck and surrendered without resistance, police said.

U.S. Capitol Police Chief Tom Manger said that Roseberry had apparently been grappling with the recent losses of family members as well as "other issues that he was dealing with."