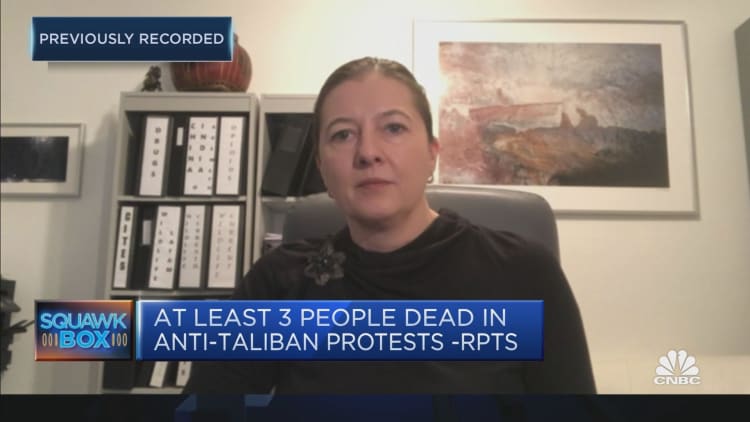 Freedoms granted to Afghan women will definitely be stripped away by the Taliban — despite the group's claims that they will respect women's rights, said a Brookings Institution researcher.

"There's is no chance that the existing freedoms, at least as they existed on paper in the constitution … will be preserved," Vanda Felbab-Brown said on "Squawk Box Asia" on Thursday.

The question is, how much will be lost?

"Are we going to end up in the most horrible situation — the way the Taliban ruled … in the 1990s? Or are we looking at freedoms and restrictions, perhaps similar to something like Saudi Arabia or Iran," she asked.

We are clearly looking at a significant reduction in political, social freedoms for all actors — not just women, but particularly for women.
Vanda Felbab-Brown
Brookings Institution

Under the Taliban, women had to wear burqas — a garment that covers them from head-to-toe, with only a mesh screen for looking through.

"We are clearly looking at a significant reduction in political, social freedoms for all actors — not just women, but particularly for women," said Felbab-Brown, director of the Initiative on Nonstate Armed Actors at Brookings.

Under Taliban rule, men were previously jailed for having beards that were too short. The State Department report also pointed to attacks on journalists, public executions and forced confessions.

Since taking power, the Taliban has promised rights for women and the media, and pledged amnesty for government officials. The group said "nobody will be harmed" and that it doesn't want "any internal or external enemies."

Across multiple media networks, there have been countless reports and pictures of people, including women and children, being beaten by the ultra-conservative Muslim militants.

There's a "major disconnect" between what is said to the media and what happens in reality, Heather Barr, interim co-director of the women's rights division at Human Rights Watch.

In an article on HRW's site, she said Taliban militants have closed entire schools for girls in recent months and years.

"The Taliban spokesman has continued to pledge respect for women's rights, but his claims ring more hollow than ever," she said.

It is likely there will be differences in the way women are treated across Afghanistan, Felbab-Brown said. That depends on local Taliban commanders and the strength of the community's capacity to negotiate, she said.

But the group has also consistently emphasized that freedoms will be given "within the context of Sharia" — or religious law, she added.