The Biden administration unveiled on Friday a government-wide plan to address the systemic threat climate change poses to all sectors of the economy.

The roadmap is part of the White House's longer-term agenda to slash domestic greenhouse gas emissions nearly in half by 2030 and transition to a net-zero emissions economy by mid-century while mitigating the impact of climate change on the economy.

Worsening climate-related disasters like heatwaves, drought, floods and wildfires threaten to upend the stability of the global financial system.

The administration's plan accounts for how climate change will affect the companies people are invested in, and it aims to protect the savings and pensions of American families with retirement plans. Climate-related risks in retirement plans have already cost U.S. retirees billions in lost pension dollars, according to a fact sheet released by the White House.

The Department of Labor "is leading efforts to remove regulatory barriers and ensure that employee benefit plan fiduciaries can incorporate material climate-related risks into their investment decisions," the report said. "These efforts will better protect the life savings of America's workers and their families from the impacts of climate change, and could also mobilize capital towards sustainable investments."

Why isn't the U.S. electric grid running on 100% renewable energy yet?

This month, more than 20 federal agencies published climate adaptation plans revealing the biggest threats climate change poses to their operations and facilities and how they plan to handle them.

"Climate change poses a risk to our economy and to the lives and livelihoods of Americans, and we must act now," National climate advisor Gina McCarthy told reporters Thursday during a press call. "This roadmap isn't just about protecting our financial system — it's about protecting people, their paychecks and their prosperity."

"We are clear-eyed to how climate change poses a systemic risk to our economy," National Economic Council deputy director Bharat Ramamurti said on the press call. "We are taking a precautionary approach that reflects the fact that inaction is not an option."

The report is called "A Roadmap to Build a Climate-Resilient Economy."

President Joe Biden has also called on Treasury Secretary Janet Yellen, the head of the Financial Stability Oversight Council and financial regulators to produce a report on climate financial risk data. That report isn't out yet.

The president and first lady are set to travel to Europe in two weeks, with the global climate crisis on the forefront of Biden's agenda. Biden will also travel to Glasgow, Scotland, to attend the United Nations Climate Change Conference of the Parties, or COP26, at the start of November. 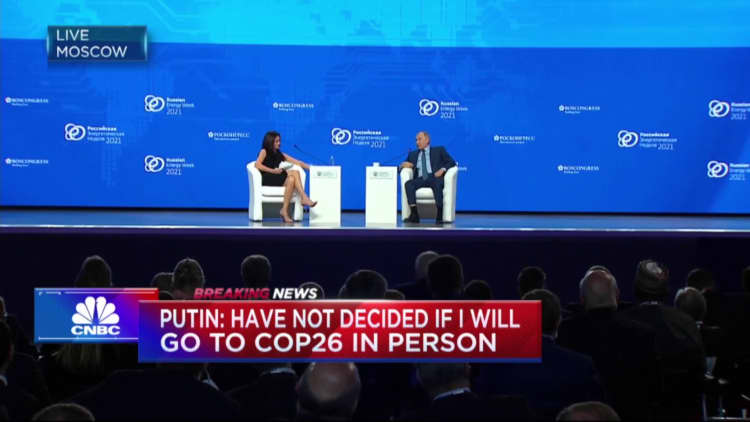 watch now
VIDEO1:2601:26
Putin has 'not decided' if he will attend COP26 climate summit
Capital Connection