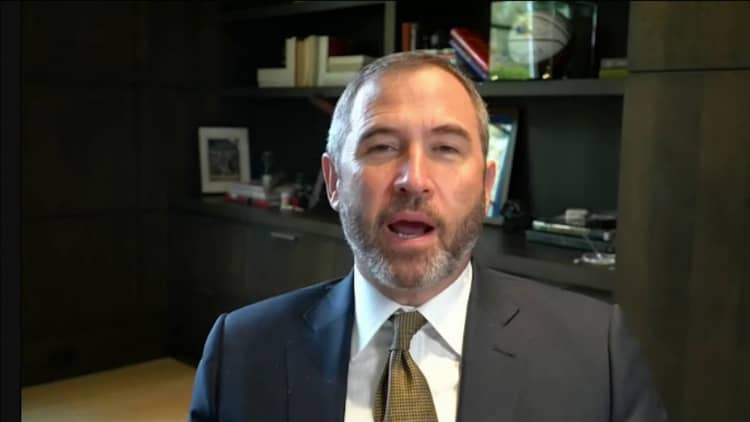 Garlinghouse said he expects the case, which centers on XRP, the world's seventh-biggest cryptocurrency, will likely reach a conclusion next year.

"Clearly we're seeing good questions asked by the judge. And I think the judge realizes this is not just about Ripple, this will have broader implications."

Garlinghouse said he was hopeful there would be closure next year.

Ripple, which is based in San Francisco, generated a lot of buzz during the crypto frenzy of late 2017 and 2018, which saw the prices of bitcoin, ether and other cryptocurrencies skyrocket to record highs.

Read more about tech and crypto from CNBC Pro

Coinbase shares to get cut nearly in half as retail traders shun crypto, Mizuho predicts

XRP, a token Ripple is closely associated with, benefited from that rally, hitting an all-time high above $3. It's since declined dramatically from that price but is riding the latest crypto wave with a more than 370% gain year-to-date

Ripple's technology is designed to let banks and other financial services firms send money across borders faster and at a lower cost. The company also markets another product that utilizes XRP for cross-border payments called On-Demand Liquidity.

The SEC is concerned about Ripple's ties to XRP, alleging the company and its executives sold $1.3 billion worth of the tokens in an unregistered securities offering. But Ripple contends that XRP should not be considered a security, a classification that would bring it under much more regulatory scrutiny.

It comes as regulators around the world are taking a closer look at crypto, a market that is still largely unregulated but has boomed in the last year.

Garlinghouse said the United Arab Emirates, Japan, Singapore and Switzerland are examples of countries showing "leadership" when it comes to regulating crypto, while China and India have cracked down on the industry.

"In general, the direction of travel is very positive," Garlinghouse said.

Brady Dougan, the former CEO of Credit Suisse, said regulation is a key area in crypto that's likely to develop over time.

"It's a market that's early in its development," Dougan, who now runs fintech firm Exos, told CNBC. "I think it's a healthy market and it's one that will continue to develop in a positive way."