Fewer than 10,000 people are using CNN+ on a daily basis two weeks into its existence, according to people familiar with the matter.

The people spoke with CNBC on the condition of anonymity in order to discuss nonpublic data.

CNN+ launched on March 29. The subscription news streaming service, which charges $5.99 a month or $59.99 annually, only became available on Roku on Monday and still isn't on Android TV. Still, the paltry audience casts doubt on the future of the application following the recently completed combination of Discovery and WarnerMedia into Warner Bros. Discovery.

To put that daily user number in perspective, CNN's cable network suffered a sharp decline in viewership last year but still rang up an average of 773,000 total viewers a day.

"We continue to be happy with the launch and its progress after only two weeks," a CNN spokesperson said.

CNN sought to make a huge splash with CNN+, luring big-name talent from rival news networks, such as Kasie Hunt from NBC News and Chris Wallace from Fox News. But there is broad skepticism whether there's enough demand to sustain a stand-alone news streaming service, with entertainment-first options dominating the landscape. Disney+, for instance, posted more than 10 million subscribers on its first day.

Warner Bros. Discovery CEO David Zaslav hasn't commented publicly on CNN+'s long-term future. He told CNBC in February he'd need to see how the application performed before deciding on any next moves.

"I haven't gotten a business review on what CNN+ is going to be and how it's going to be offered," Zaslav said at the time.

It's possible, if not likely, that CNN+ programming will be offered as part of a larger bundled offering of HBO Max and Discovery+, according to people familiar with the matter. Both of those services have millions of subscribers.

Ex-WarnerMedia CEO Jason Kilar decided to push ahead with CNN+'s launch two weeks before merging the company with Discovery. Kilar left the company last week. He was upbeat about subscriber numbers in an interview with CNBC, but didn't cite any figures.

"It's ahead of my expectations in terms of where the subscribers are, the engagement, the receptiveness that we're getting in terms of people's response to the journalists of CNN+," Kilar told CNBC's Julia Boorstin. "I couldn't be more proud of that team."

Axios reported earlier Tuesday that new leadership at Warner Bros. Discovery plans to cut hundreds of millions of investment dollars for the service given concern over its future. Incoming CNN chief Chris Licht will join Warner Bros. Discovery on May 1 and will make decisions on how best to proceed, two of the people said.

Disclosure: NBCUniversal is the parent company of CNBC. 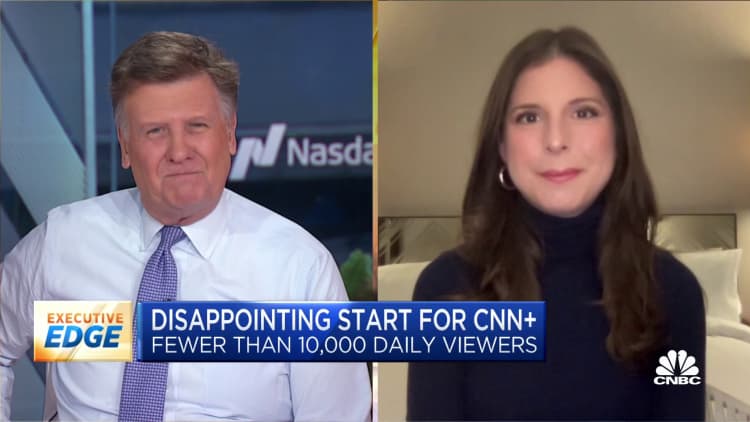