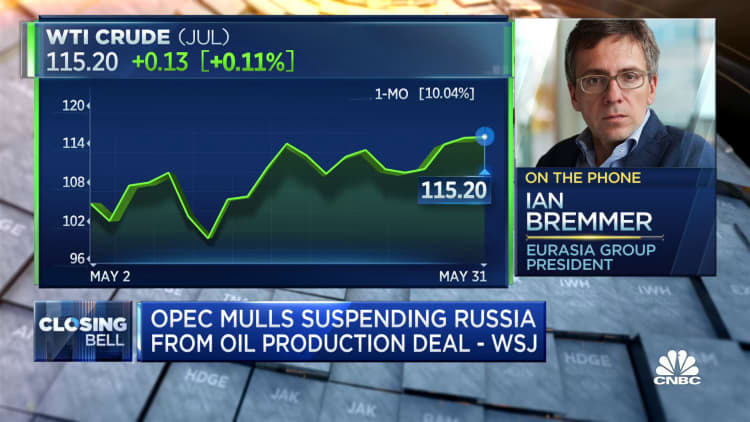 European Union leaders reached an agreement this week to ban the majority of Russian crude oil and petroleum product imports, but nations were already shunning the country's oil, altering global flows for the commodity that powers the world.

Russian oil exports had already been hurt by some EU members acting preemptively in anticipation of potential measures, in addition to bans from countries including the United States, according to commodity data firm Kpler.

"The rise in the volume of crude on the water is because more barrels are heading further afield —specifically to India and China," said Matt Smith, lead oil analyst for the Americas at Kpler.

"Prior to the invasion of Ukraine, a lot more Russian crude was moving to nearby destinations in Northwest Europe instead," he added.

Russia's invasion of Ukraine at the end of February has sent energy markets reeling. Russia is the largest oil and products exporter in the world, and Europe is especially dependent on Russian fuel.

EU leaders had been debating a sixth round of sanctions for weeks, but a possible oil embargo became a sticking point. Hungary was among the nations that did not agree to a blanket ban. Prime Minister Viktor Orban, an ally of Russian President Vladimir Putin, said a ban on Russian energy would be an "atomic bomb" for Hungary's economy.

In March, oil prices surged to the highest level since 2008 as buyers fretted over energy availability, given the market's already tight conditions. Demand has rebounded in the wake of the pandemic, while producers have kept output in check, which means prices were already rising prior to the invasion.

"Russia's invasion of Ukraine has sparked an unraveling of how the global market historically sourced barrels," RBC said Tuesday in a note to clients.

The International Energy Agency said in March that 3 million barrels per day of Russian oil output was at risk. Those estimates have since been revised lower, but data collected prior to the EU agreeing to ban Russian oil show that exports of Russian fuel into Northwest Europe had already fallen off a cliff.

But Russian oil is still finding a buyer, at least for now, as the country's Urals crude trades at a discount to international benchmark Brent crude.

More oil than ever is heading to India and China, according to data from Kpler.

Wolfe Research echoed this point, saying that while Russian oil production has declined since the start of the war, exports have remained "surprisingly resilient."

The firm said that Russia has rerouted exports to places including India, which shows up in vessel traffic through the Suez Canal. Analysts led by Sam Margolin noted that traffic through the key waterway is up 47% in May as compared with this time last year.

"Rerouting Black Sea tankers down Suez as opposed to Europe is a longer route and therefore inflationary to oil prices, and these 'last resort' trade patterns can portend bigger supply problems in the future because the market is clearly down to its last options to clear," the firm said.

Correction: The amount of seaborne Russian oil is measured in millions of barrels. A chart on an earlier version of this article mislabeled the volume increments.