The market has dried up for most new public offerings, but last week Kellogg announced it is splitting up into three new companies. Its decision speaks to the kind of long-term thinking about core growth opportunities that should be on the minds of C-suites regardless of peaks and valleys in investor appetite for deals, and may in fact be even more important as economic growth slows.

Research conducted by Emilie Feldman, an expert on corporate divestitures at the The Wharton School, University of Pennsylvania, indicates that there is always a market timing element to divestitures, and companies seek to do spinoffs and other public offerings when market conditions are favorable. But it is also true that when market conditions soften, some of this calculus might shift.

"The prevailing logic for divestitures might be to use them to focus on core assets that have the greatest future prospects," Feldman said. "This is exactly what I think is happening with Kellogg … get out of businesses (cereal) where future growth potential and prospects might not be as favorable, and then focus on businesses (snacks, plant-based meat) where prospects might be stronger." 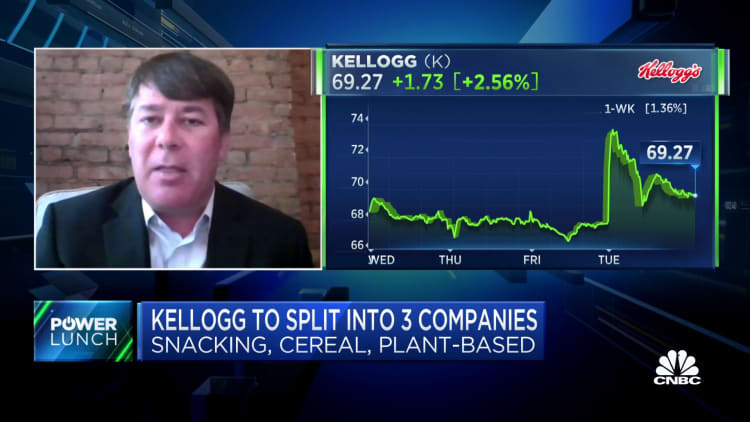 Her research shows that after firms divest businesses, they tend to redeploy resources (especially financial capital) into sectors with stronger future prospects in their remaining businesses. This pattern may be in play in the Kellogg's case, Feldman said. The company can focus its resources intensively into the snacks business – once it is freed from making continuing investments in cereals – and especially plant-based meats (where growth prospects might be quite strong, but perhaps also more risky given that this is a more nascent area).

"As market conditions tighten, the need to get the most 'bang for your buck' in terms of return on investment increases," she said.

"We believe splitting into three different businesses is the right thing to do and this is the right time," Kellogg CEO Steve Cahillane told CNBC last week.

Spinoff activity within the past decade has been high in the U.S., reaching $654 billion in new companies, according to FactSet Research. Iconic American companies including Johnson & Johnson and GE announced spinoff plans in 2021, a move senior management teams at large companies are often reluctant to pursue. Feldman says even more companies may now opt for a similar review of their corporate structure as the economic cycle shifts.

"We're likely to see more of the 'reasoned' divestiture decisions now as market conditions tighten and companies are in a sense forced to focus resources on what's really core," she said, and she stressed that this is the proper approach in any market. "This really is the right way that companies should think about divestitures almost all the time. But, obviously, they don't, and especially when markets are hot." 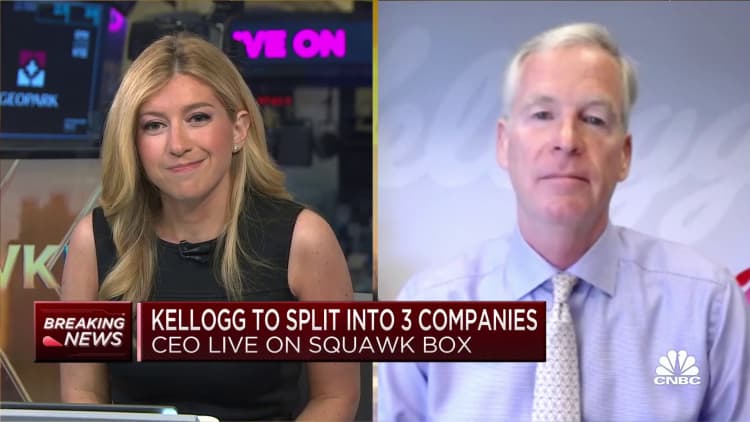