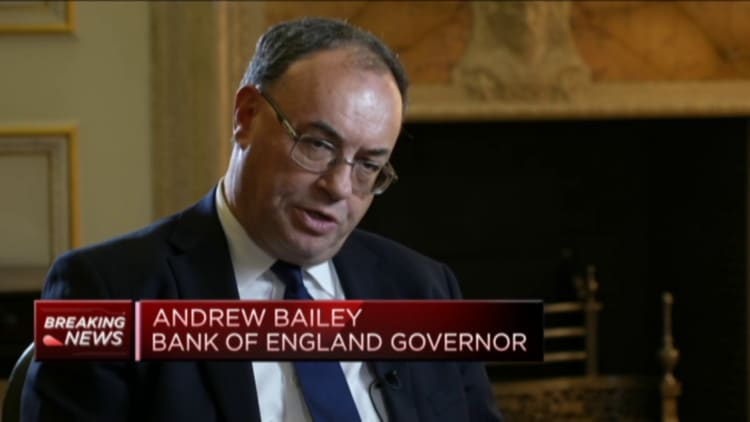 LONDON — The Bank of England on Thursday defended its decision to hike interest rates at the fastest clip in 27 years, saying the U.K. faces a "very big" shock to inflation.

BOE Governor Andrew Bailey said that the risks of high inflation becoming persistent had risen since the Bank's previous meeting in June, prompting it to take "stronger action."

The BOE on Thursday raised interest rates by 50 basis points, taking borrowing costs to 1.75% in an ongoing bid to curb soaring inflation.

It also issued a dire outlook for U.K. economic growth, predicting that the country will enter recession from the fourth quarter of 2022, with the downturn expected to last for five quarters.

GDP growth in the U.K. has slowed and the economy is now forecast to enter recession later this year.
Andrew Bailey
Governor, Bank of England

The central bank has faced criticism for not acting sooner and more aggressively to tackle runaway inflation. But Bailey insisted Thursday that many of the inflationary shocks facing the U.K. economy were external and unexpected — most notably Russia's war in Ukraine and its detrimental impact on energy prices.

"We don't make policy with hindsight," Bailey said. The war in Ukraine "is not something that was foreseen or frankly could be foreseen."

The Bank's Monetary Policy Committee approved the sixth consecutive rate hike by a majority of 8-1 in favor of the historic half-point hike.

The rate increase marks the central bank's biggest single increase since 1995 as it attempts to shift inflation back toward its 2% target.

The BOE said it now sees U.K. inflation peaking at 13.3% in October, well above the 11% previously predicted, and driven particularly by soaring energy prices. It added that it expects inflation to remain at elevated levels through much of 2023, before falling toward its target in 2025.

"This rise in energy prices has exacerbated the fall in real incomes and so led to another significant deterioration in the outlook for activity in the U.K., and in the rest of Europe. GDP growth in the U.K. has slowed and the economy is now forecast to enter recession later this year," Bailey said during a press conference earlier on Thursday.

The Bank's shift toward a more aggressive tightening stance puts it closer in line with other Western monetary policymakers. Last month, the U.S. Federal Reserve and the European Central Bank hiked rates by 75 basis points and 50 basis points, respectively.

Market analysts said that the BOE's determination to "forcefully" counter inflation suggests that it could implement a further 50 basis point hike at next month's meeting.

"This indicates that another 50 basis point rate hike is possible at the next MPC meeting in September, depending on economic data in the interim."