Businessman Tim Michels has won Wisconsin's Republican primary for governor, NBC News projects, advancing to a general election against Democratic Gov. Tony Evers that will be among the most consequential in the country.

It's another swing state victory for Trump, who continues to lie about his losses in Wisconsin and other battlegrounds in 2020 while aiming to install allies he hopes will be loyal if he mounts another White House bid in 2024. ]

Michels has embraced Trump's debunked claims that a second term was stolen from him. And while he's waffled at times, Michels has said he is open to efforts to decertify President Joe Biden's win in the state, even though there is no actual legal vehicle, under state or federal law, to rescind a state's electoral votes.

Evers was renominated without opposition.

Michels supporters — gathered inside a small catering hall in Waukesha, a Republican stronghold whose voters are key in the primary race — sipped drinks and munched on sliders and other sandwiches as they waited for results Tuesday night.

The co-owner of a successful family pipeline construction company, Michels had tread cautiously in the closing weeks of the race, sending mixed messages about how much he was willing to abide Trump's pressure to back decertification of the state's 2020 election results. Michels and Kleefisch had both echoed Trump's debunked claims of voter fraud during the primary. Ramthun, however, was the most vocal on such issues.

Kleefisch's list of endorsers included Scott Walker, the former governor she served with, and former Vice President Mike Pence. Pence's involvement triggered another GOP proxy war between Trump and his former No. 2, who resisted pressure to overturn the 2020 election and is believed to be laying the groundwork for his own 2024 presidential bid. 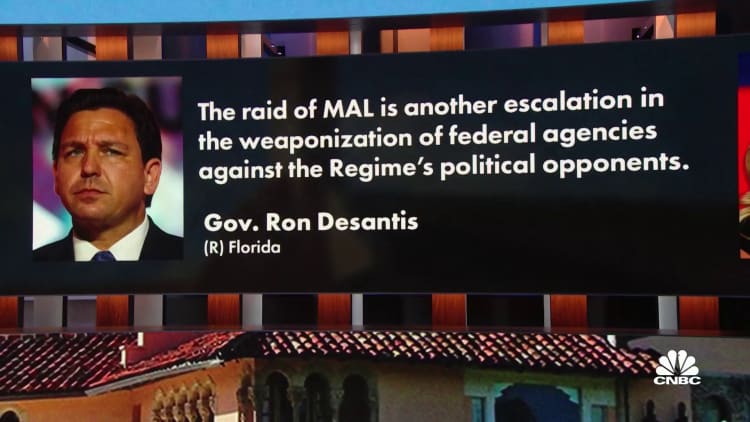 Some Kleefisch voters who spoke with NBC News in the days leading to Tuesday's primary said they were impressed with the work she and Walker did together. Others echoed her concerns that Michels, who owns a home in Connecticut and lives part of the year there, hadn't been fully engaged in the crises Wisconsin has dealt with in recent years.

Bill Means, a retired school administrator from Pleasant Prairie, called Michels a "Johnny-come-lately with lots of money" and a "partial-year resident."

Michels voters, on the other hand, consistently said they were drawn to his experience as an "outsider" businessman who, until this race, had largely stayed out of politics — though a few said Trump's endorsement made a difference in their decision to support him.

"I found him refreshing," said Carol Smith, a retired counselor from Oconomowoc. "I think either of them would represent Wisconsin well but I just like that he's an outsider."

Michels is the latest Trump-endorsed candidate for governor to advance to the general election in a battleground narrowly won by Biden in 2020, joining Kari Lake in Arizona, Tudor Dixon in Michigan and Doug Mastriano in Pennsylvania. Trump's efforts to unseat Georgia Gov. Brian Kemp, a Republican who refused to overturn the state's election results, failed in a primary this year.

"After a scorched earth primary that's seen constant attacks and a dizzying race to the radical right, the Republican Party has chosen the most extreme and divisive nominee possible, one that will tell Donald Trump anything just to keep his endorsement," Evers campaign manager Cassi Fenili said in a statement emailed shortly after the race was called.