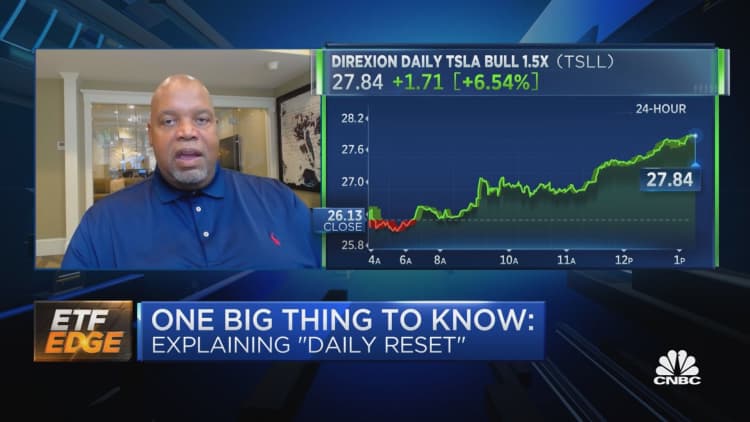 The opportunity to reap quick returns in the short term is garnering appeal from ETF investors who are either bearish or bullish on a single stock.

But as the latest way to trade single stocks takes off, there are key components of the products that investors should keep in mind before engaging.

Single-stock ETFs offers traders the exposure to the daily performance of a singular stock. TSLL, for example, gives bullish investors 1.5X the daily exposure. TSLS is meant for bearish investors to obtain 1X the return of the Tesla.

At the end of the day, it resets. It then starts again the next day.

"There is a swap that is utilized to give the leverage effect on all ETFs and in some counterparties," Reggie Brown, Principal at GTS, told Bob Pisani on CNBC's "ETF Edge" on Monday. "Some ETFs have five different swap counterparties to reduce the risk to individual investors.

"It's important to understand when the reset is, and what are the periods not covered," Brown said. "And then the next day, what happens."

For investors who hold on to their product over a period of days, Brown said that they will get the reset effect, or gamma.

"It's resetting inside of it," he said, "and you're not getting the full return."

GraniteShares CEO Will Rhind said that counterparty risk is a valid concern when talking about a swap, a is a bilateral contract between two parties.

"The risk is, whoever the counterparty is, if they go bankrupt, then that will affect the value of the ETF," Rhind said on CNBC's 'ETF Edge' on Monday.

The counterparty is typically an investment bank, Rhind said. He used Lehman Brothers during the financial crisis as an example.

"There were a few issued exchange-traded notes that were canceled or redeemed as a result of that," he said. "People lost money, so that is a concern."

But since single-stock ETFs are meant to be held for a short period of time, Rhind said that counterparty risk is typically not a high level of concern for investors.

There are currently single-stock ETFs for Tesla, Apple, Coinbase, Nike, Pfizer, Paypal and NVIDIA. Brown said that issuers will not keep a product in the marketplace that's not getting reception by gaining assets.

"Generally, stocks that have high conviction, high beta and high volatility is probably where you'll see the most assess in a levered or inverse single-stock structure," Brown said.

Direxion, for example, recently launched a suite of single-stock ETFs that revolve around Tesla and Apple. Dave Mazza, Direxion's Managing Director and Head of Product, said that filings for other securities are ongoing, particularly for some of the mega cap names.

"At this time, we're really focused at getting some of those larger names that have depth of volume and liquidity around them," Mazza said, "so that we are in the best position to both create ETFs and manage them as daily trading tools."

While volatility and volume are key components to identifying a stock that can function as an ETF on its own, Rhind said that it also must be commercially viable.

"The question we always get asked is 'can you do it on Gamestop or AMC?' Rhind said. "And so far the answer has been that it's too volatile."

Regulatory rules on how products can be launched guide the decision-making process and the amount of leverage offered, Rhind said.

Single-stock ETFs first launched last month, so the levels of demand for the products and its ongoing sustainability are unsettled for the time being. And as the products accelerate, Brown said that the innovation is broadening the ETF industry.

"These are the good things, bringing investors into the marketplace," Brown said. "But having a clear view on investment tools versus trading tools as we go further into innovation is probably the best practice we can put in."