Apple just wrapped up its big fall iPhone event where it announced new iPhones, AirPods and Apple Watches. Here's what it announced:

Check out the rest of our coverage below.

The iPhone 14 Pro will start at $999, and the bigger model starts at $1099. That's the same price as last year's models. They go up for preorder on Friday and will ship next week.

These devices have a new front design with a smaller cutout for the front-facing camera which expands the device's screen. Apple calls the cutout a "dynamic island" and it can essentially display notifications or other system information, such as baseball scores.

The iPhone 14 Pro has a lot of new features: 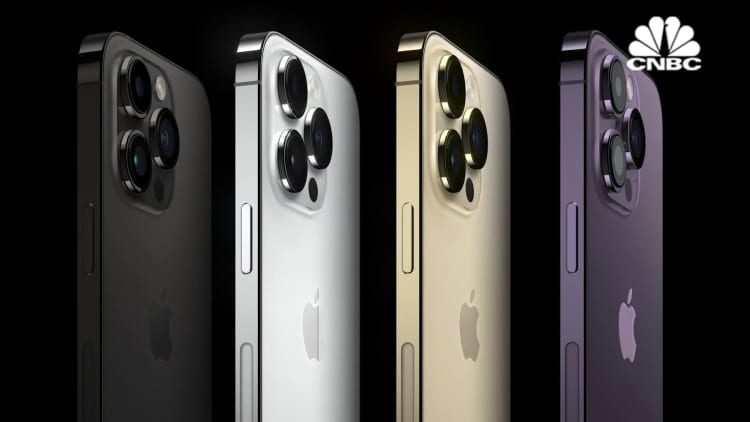 Apple announced a long-rumored capability to connect its iPhone 14 series to satellites for emergency services during its event on Wednesday, through a partnership with Globalstar.

The feature is designed to connect an iPhone 14's antennas directly to a satellite, to send a message in areas unconnected by cell towers.

Apple's manager of satellite modeling and simulation Ashley Williams said an algorithm in the phone compresses text messages to a size that will "take less than 15 seconds to send" to a satellite, before its relayed to a ground station and on to an emergency service provider.

The emergency satellite service launches in November, and is included free for two years with an iPhone 14.

Globalstar confirmed in a filing that it is supporting the iPhone 14 emergency satellite service, and will "allocate 85% of its current and future network capacity" to support the feature.

Apple announces iPhone 14 and iPhone 14 Plus starting at $799 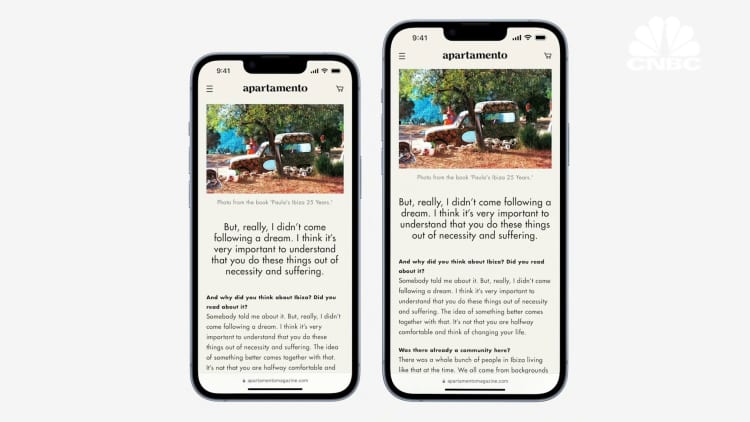 Apple CEO Tim Cook just announced the iPhone 14. So far, Apple has announced two new models— a iPhone 14 Plus and an iPhone 14.

The iPhone 14 will start at $799 and the Plus will cost $899. Preorders start on Sept 9 and the smaller version will go on sale on Sept. 16. The Plus model won't ship until October, though.

Apple said that all U.S. iPhone 14 models will no longer use physical SIM cards, replacing them with a digital eSIM that can support multiple phone numbers and is better for security.

Features of the iPhone 14 include:

They have better sound quality and clarity, Apple said, due to an Apple H2 chip on the inside, an upgrade from the earlier model's H1.

Apple said that the noise cancellation on the new models is twice as good as before.

It will cost at least $799 and will hit store shelves Sept. 23. Preorders are available Wednesday.

It comes with a new watch face with more information, including a compass. It also has a new orange "action" button for quick use while working out or wearing gloves. It can also show how deep the user is diving while swimming.

Apple says the watch can get as much as 60 hours of battery life with a software update this fall. 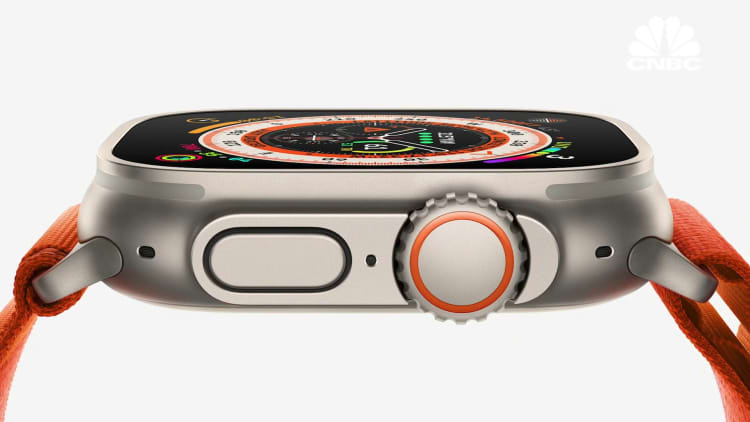 "Every detail has been engineered to create the most rugged and capable Apple Watch ever," Apple COO Jeff Williams said in a promo video.

Apple has announced a redesigned Apple Watch SE, which is a lower-cost version of its mainline Series 8.

It will retail for either $249 or $299 starting on Sept. 16. Apple is marketing it as a device for children who might not need their own iPhone. — Kif Leswing 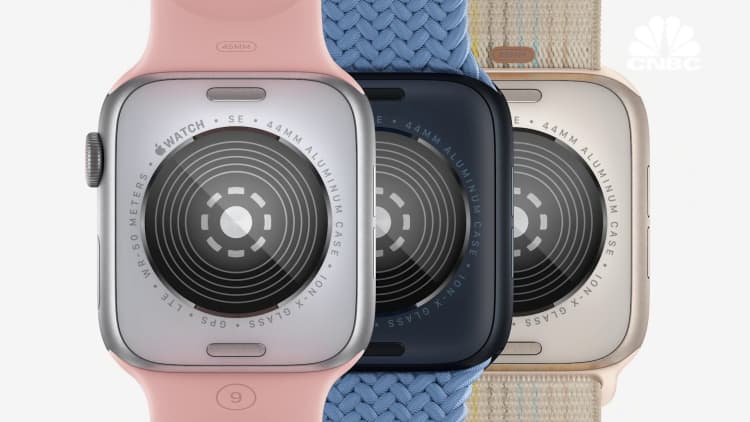 The new device will be called the Series 8, Apple COO Jeff Williams said. It's more durable than previous models and has a new temperature sensor that can be used to help monitor health data, including ovulation.

It will come in four colors in aluminum — black, gold, aluminum, and red — and three colors in stainless steel. It costs at least $399 for an aluminum model and $499 for one with cellular connectivity.

Apple says the device is designed to keep data secure and private and that health data will only be shared with explicit permission from the user.

Apple also added a new safety feature powered by two motion sensors. The new car crash detection can detect if you were in a severe car crash and automatically call emergency services.

A new mode on Apple Watches can extend the Apple Watch battery life from 18 hours to 36 hours by temporarily disabling the always-on display and workout notifications. 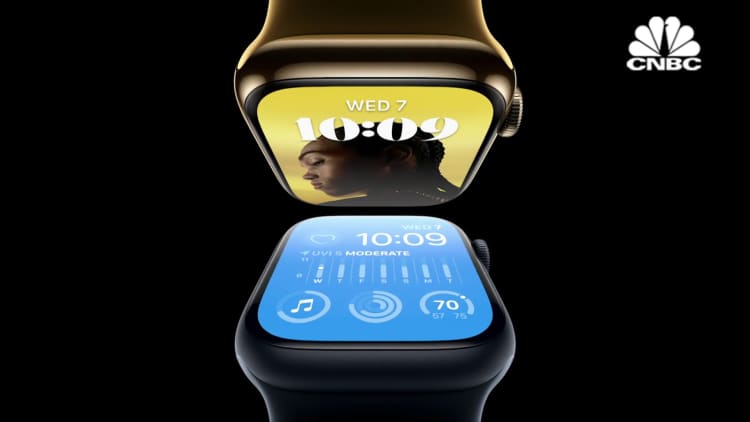 Cook started by airing a video featuring people reading letters written to him about how the wearable has helped them get assistance in emergency situations.

The event is starting. Tim Cook just said the event will focus on three products, the iPhone, AirPods and Apple Watch. -- Sofia Pitt

We're in our seats

We're in our seats and the theater is starting to fill up. There's definitely a galaxy sort of theme going on here. Apple's invite teased something "far out." We'll know what that means soon enough. -- Sofia Pitt

Over 300,000 people waiting to stream Apple's launch on YouTube

Ten minutes minutes before the launch is scheduled to begin in Cupertino, California, over 300,000 people are on the YouTube livestream page, a sign that there is still significant consumer demand for information on new Apple products direct from the source. — Kif Leswing

Apple's fall launches are critical for the company as they draw millions of viewers from around the world who want to know about Apple's newest products. They build hype for new iPhones and other devices going into the all-important holiday shopping season, Apple's busiest sales time of the year. -- Kif Leswing

We're about to take our seats

We're walking down to take our seats in the theater. -- Sofia Pitt

Tim Cook hints at a 'stellar' theme for the event

Apple CEO Tim Cook has posted his traditional pre-launch tweet, which hints at the theme for the event with the word "stellar."

Apple's invites had the tagline "far out" with deep space imagery, which some Apple followers thought could suggest that Apple was preparing to release a satellite-based cellular connection for iPhones or a night sky photography feature. — Kif Leswing

Check out the snack spread

Lots of snacks for press and analysts before the event kicks off.
Sofia Pitt | CNBC

There are lots of snacks and beverages here. We're about to head downstairs to take our seats before it kicks off. -- Sofia Pitt

Investors looking to trade on the news of Apple's new iPhones on Wednesday should keep Bernstein's Toni Sacconaghi's advice in mind.

"Historically, Apple's stock does not react materially to iPhone announcements (given that there are typically no surprises), and performance has generally been fairly muted in the 3-months following iPhone announcements (typically mid-September to mid-November), as investors wait to gauge the strength of the iPhone cycle," Sacconaghi wrote in a note this week.

In fact, analysts say that Apple shares typically perform in-line with the market one month after the reveal, CNBC reported this week. — Kif Leswing

Apple store is down ahead of the event

The Apple Store is down.
Apple

The Apple Store is down, per tradition, until the end of the launch event when it will come back online with all of Apple's new products.

We're here at the Steve Jobs Theater in Cupertino

We have our badges!
Sofia Pitt | Apple

We're here live in Cupertino, California at the Steve Jobs Theater, where Apple is set to unveil its new products. You can see in the image below that it's already getting pretty packed with press and analysts. And we're all badged up. -- Sofia Pitt