Sometimes dubbed "the rainforests of the sea" coral reefs make up less than 0.2% of the ocean floor but are home to 25% of all marine species.

Human activity and global warming mean these unique and fragile ecosystems are under threat. In partnership with Qatar University and France-based marine biodiversity company Seaboost, Total is working on an innovative solution inspired by nature, to restore degraded coral.

"Degradation is a really serious problem, it requires urgent intervention and REEF is a contribution to that," says Philippe Blanc, who heads up Total's Marine Ecosystems Environmental Monitoring and Restoration R&D work.

A solution inspired by nature

Total's R&D teams are aiming to cement their ambition as the responsible energy major, seeking out environmental mitigation solutions wherever possible. The REEF venture sees them developing artificial reefs and finding new structures and materials that encourage the recolonization of degraded ones. 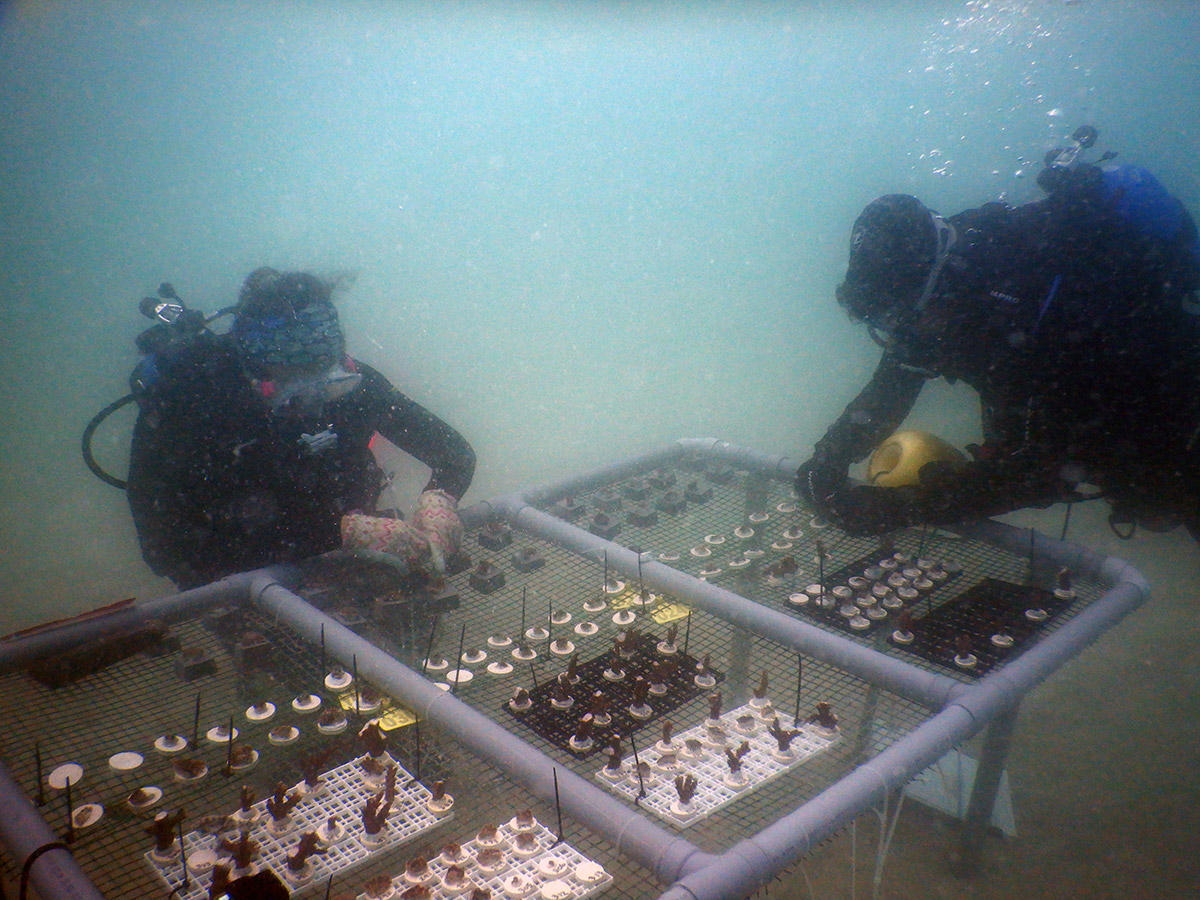 REEF structures are designed to mimic the places where corals grow in their natural habitat. The modules are made from innovative objects, with a variety of materials. The design and materials both influence the settlement and growth of larvae.

"REEF can really bridge a gap. We hope to end up with specific constructions in specific areas which we can then move into position to boost coral propagation on selected sites," explains Blanc, "REEF isn't being designed with a view to supporting a particular type of coral, it can attract all sorts depending on what already exists out there in nature."

The venture started in France in 2016 in partnership with Seaboost and stakeholders agreed local knowledge of the marine environment was key to success.

Alongside Seaboost, a specialized team at Qatar University and Total Research Center Qatar (TRC-Q) will monitor the pilot until 2023. The Qatar-based team has already been advising on where best to place the structures for maximum coral colonization. The pilot will also be included in a thesis on coral restoration and underwater monitoring. 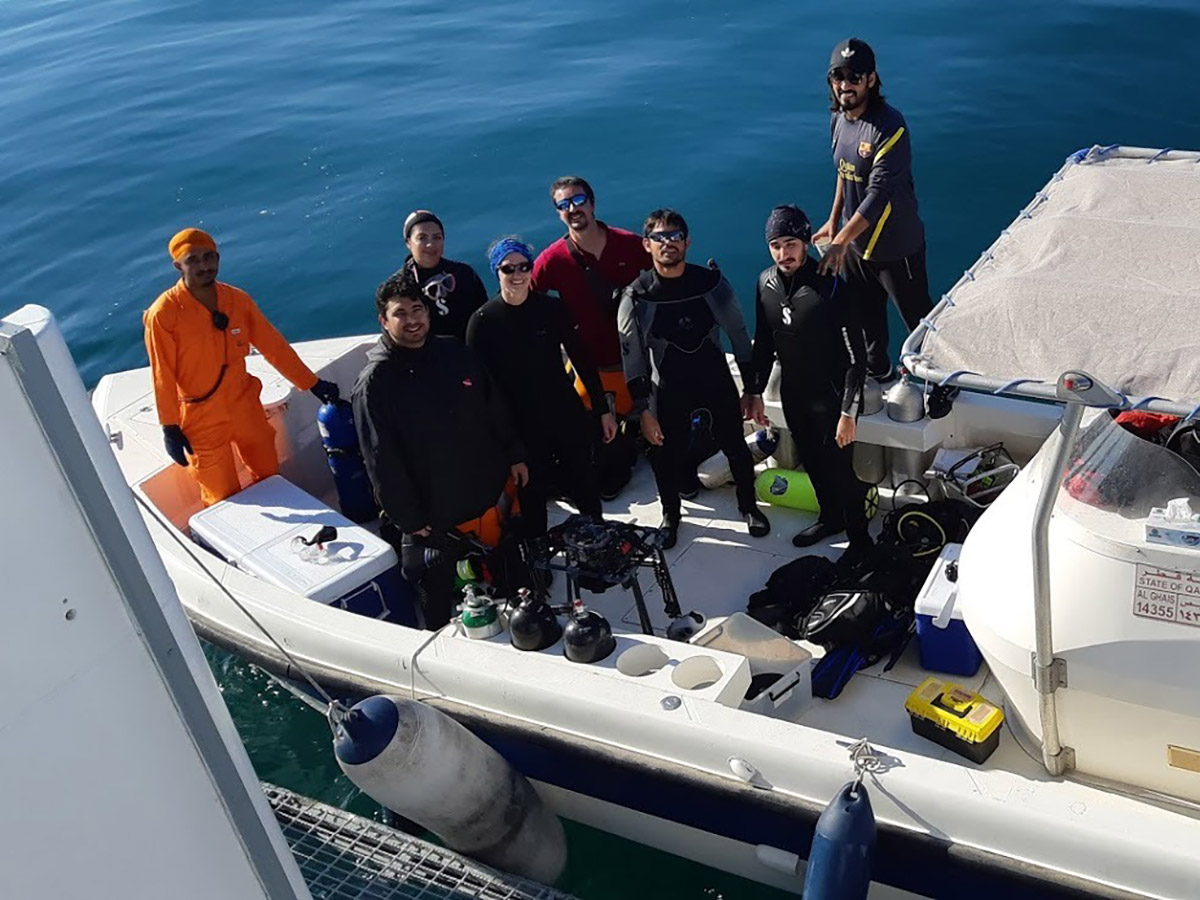 In coordination with Seaboost and TRC-Q, Dr. Radhouan Ben-Hamadou leads the team of scientists based in Qatar. "We think that since the 1990s about 90% of the coastal fringing coral reefs in the Arabian Gulf have been lost. Mainly due to coastal development, but environmental conditions played a part, coral has faced disease and the warming of the sea water," he says. 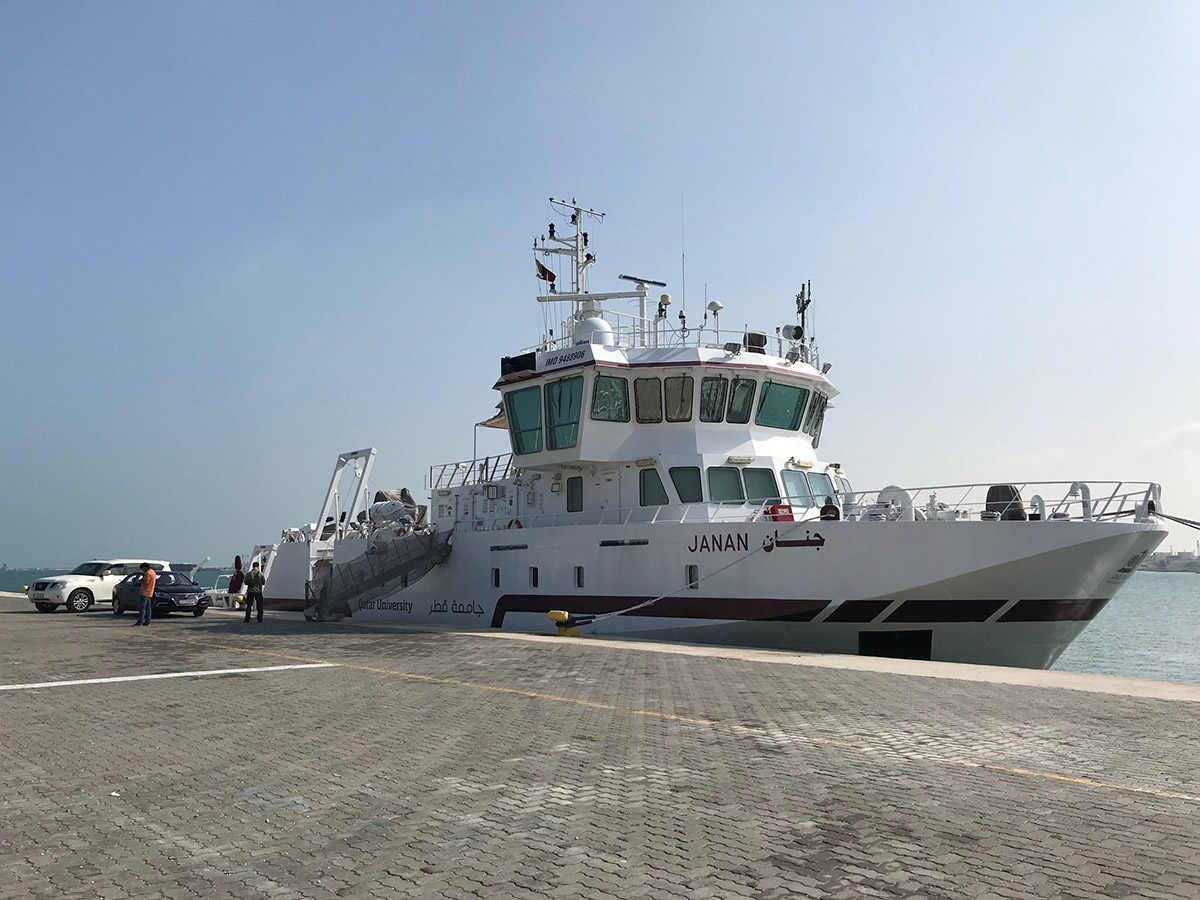 "Qatar provides almost ideal conditions for REEF, with a strong scientific knowledge on local coral reef distribution. Parts of the Arabian Gulf are also relatively shallow, so we hope lifting the structures using a crane will be straightforward," explains Blanc.

Seaboost will direct the deployment of the artificial reefs with the help of the Qatar University specialists. Cranes will lift and lower a total of 18 REEF structures at two different sites, they will be about 120 kilometers offshore and settle about 20 meters underwater. 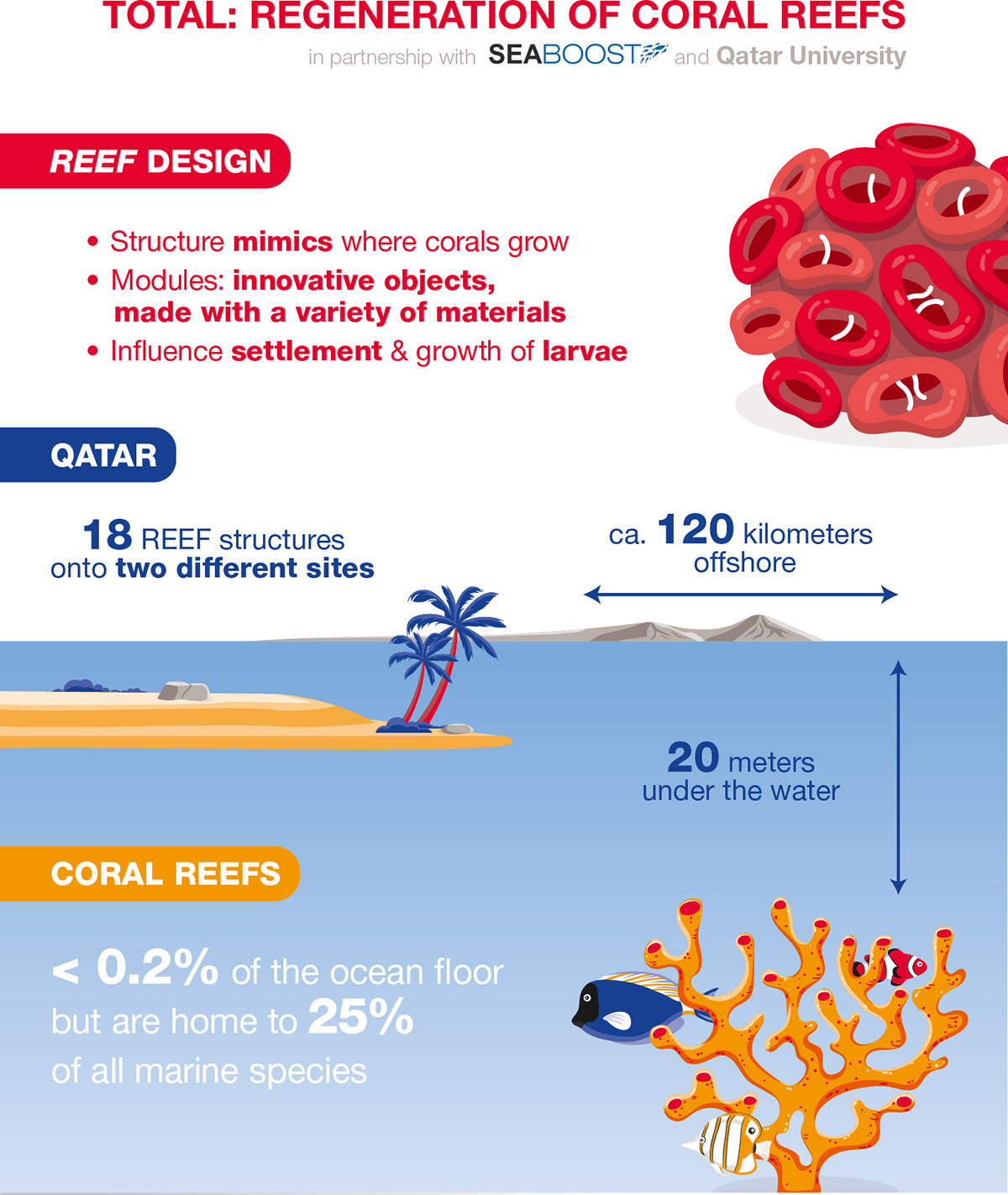 "We need the coral to grow on the structure we're sinking, and we need to make sure these corals can survive the different applications we may have for these structures — it's a huge challenge," he says.

"We have very high hopes but let's not forget it's very much a scientific project at the moment," Blanc continues, "We might not fully succeed, for example after 2-3 years out in the sea there could be structural failures, the corals might not develop or survive after settling on the surface. The colonization rate of the structures will still be highly dependent on external environmental conditions. We do not yet know to what extent the structures' characteristics will boost natural colonization processes and if the rates will be compatible with our applications. But we won't know unless we try. That's the joy of working in R&D, we're betting on something that we believe will work but we just don't know for sure. It's exciting!"

Coral reef restoration is still in its infancy, but Total has led some of the innovations in the space. In 2008 off the coast of southern Yemen close to the Balhaf LNG Terminal, Total transplanted coral from one place to another to prevent damage to ecosystems close to their operational site. This landmark project helped shape the wider Group's biodiversity policy.

The transplantation method works but there are downsides, specialist teams have to dive for several hours, which can be a considerable safety risk for those involved and prove costly. State-of-the-art REEF technology aims to bridge both gaps, offering a safer and more cost effective solution. 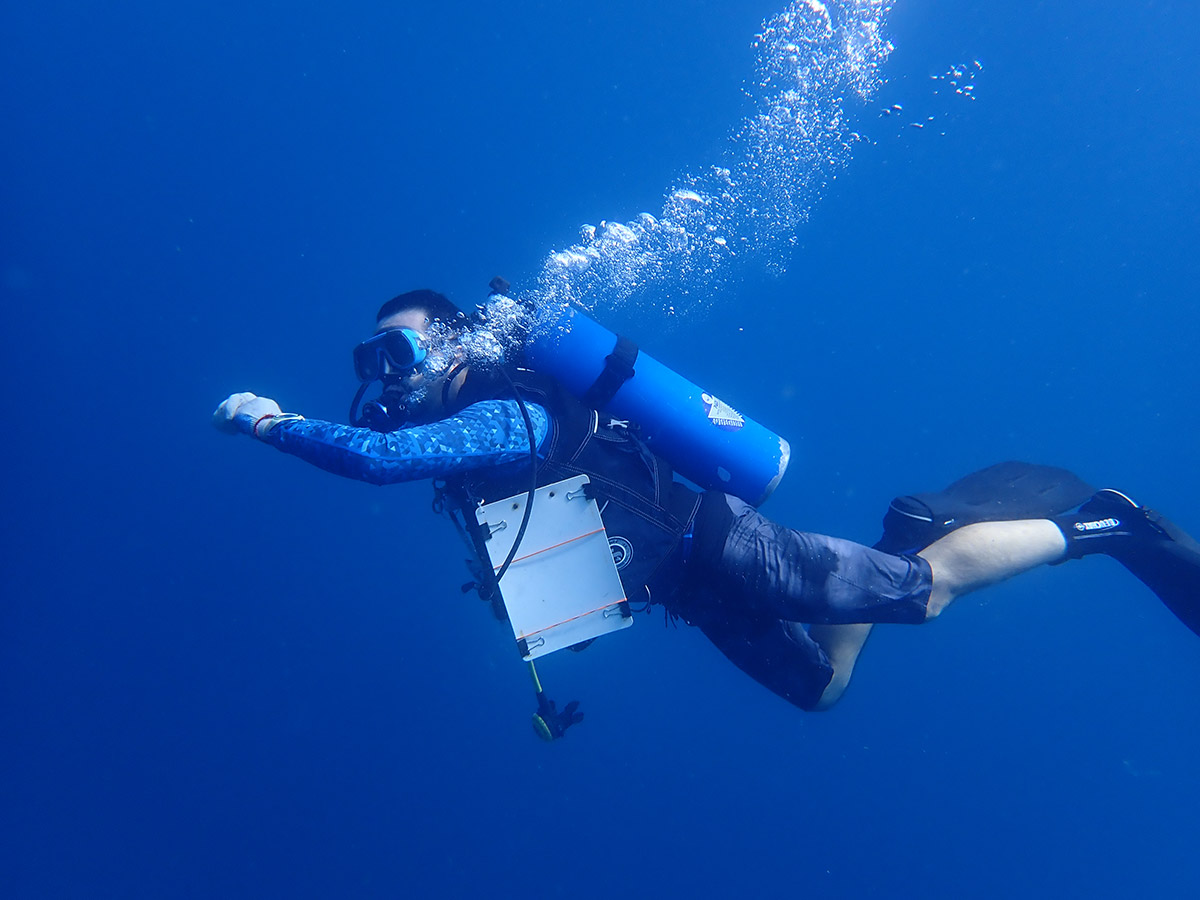 R&D teams at Total have a second project with Seaboost, complementing the Qatar project, running in French Polynesia. Just off the island of Moorea they are using tiles for the growth of the local corals. "Between now and the first test results back from the Qatar REEF sites we will have a better idea of what materials and structures are optimizing coral growth," says Blanc.

"These tests will enable us to assess the biocompatibility and performance levels of the different materials and surfaces chosen," he continues, "Our research work is crucial in determining the properties required to optimize the settlement and survival of coral colonies on the REEF modules, in terms of both quantity and diversity."

The future of reef

The pilot phase in Qatar should finish in 2023, but testing on new sites could happen earlier if results allow. Coral regeneration could end up being fully integrated into Total's widening biodiversity initiatives.

Dr. Ben-Hamadou is optimistic, "The project is intended to be long term. REEF is a passive and large scale restoration tool, complemented with specific short term small scale and active restoration methods," he says, "Total, being so active in the region, is well positioned to showcase how industrial activities can go hand in hand with environmental conservation and restoration."

"In the future I very much hope that this will be something that's used widely in the preservation and regeneration of corals internationally," Blanc explains.

He stresses the experimental nature of the REEF project, "We eventually intend to scale-up and use REEF close to our operational sites and projects," he says, "But for now we're concentrating on the structure and how that works and improves the lifespan and growth of the coral. The next step will be to look at the environment around the new structures, how the ecosystem is being supported and what we're observing in the wider environment." 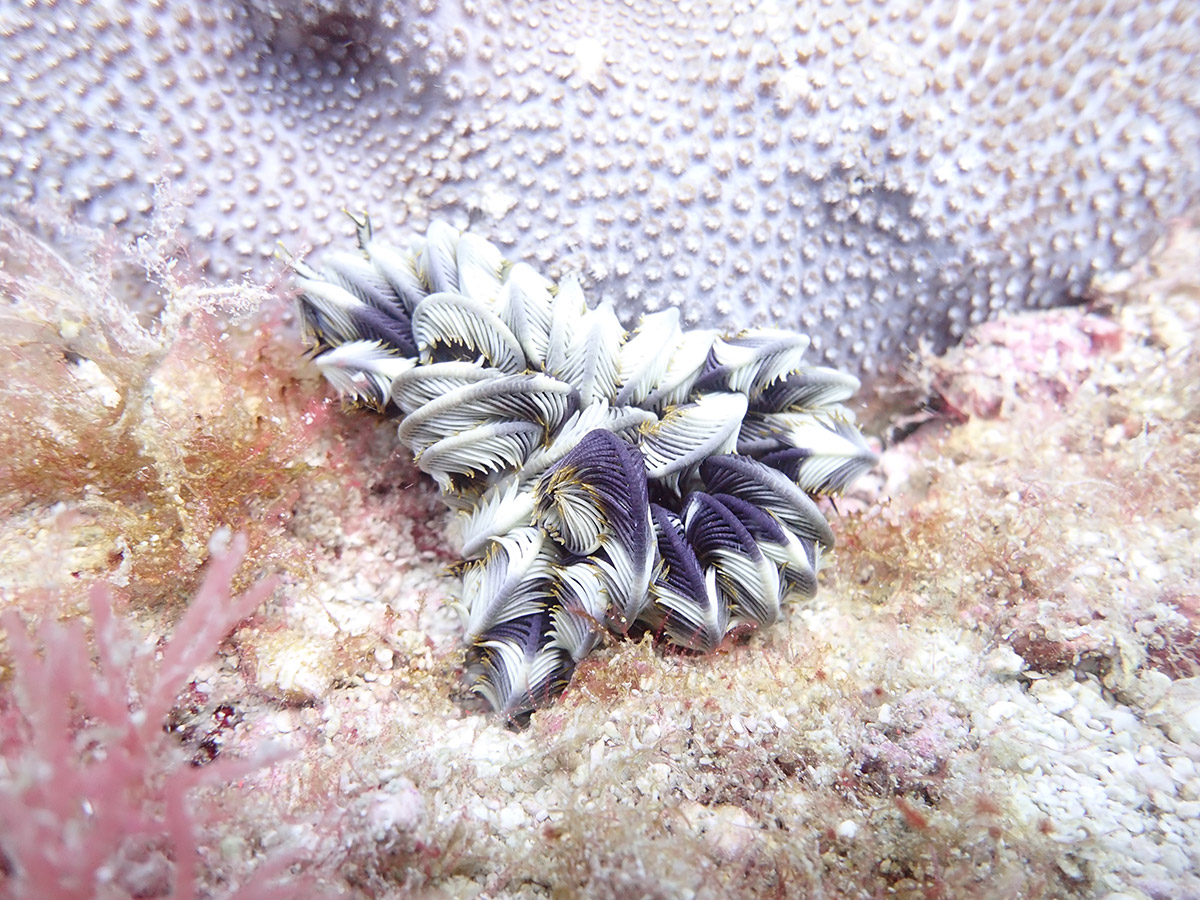 Sustainability is a driving force. In the future, the structures could be placed in coral sanctuaries for colonization as a preventive measure, or in a damaged area when needed, supporting the resilience of coral habitats using a risk mitigation approach.

REEF modules are intended to be produced, installed and maintained by local communities, contributing to social and industrial development, as well as generating a net positive impact for the communities nearby.

"Little by little, we hope that degraded coral reefs will recover and reclaim their role in biodiversity. It may not work, it may not work as well as we would have liked," says Blanc, "But obviously my real hope, as a scientist, is that it exceeds expectation."