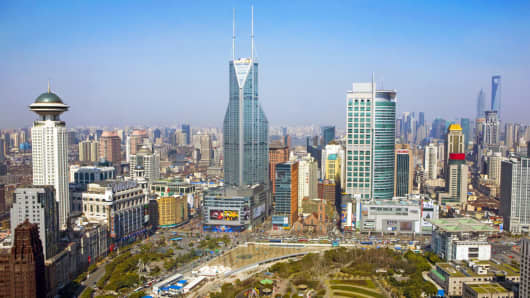 China's leaders are likely to stick with the 2012 economic growth target of 7.5 percent when they chart a course for 2013, allowing higher levels of fixed-asset investment to offset weak export demand, sources involved in internal discussions about the plans say.

The leaders are expected to gather in mid-December for the annual Central Economic Work Conference, which investors watch closely for clues on policy priorities for the year ahead.

Steering a steady course for the economy may disappoint some in financial markets because of expectations China's new leader Xi Jinping and other policymakers would unveil aggressivestimulus next year when they take office to revive an economyseen growing in 2012 at its weakest pace since 1999.

China's annual growth rate fell for seven straight quarters through the third quarter, but economists are forecasting the start of a pick up in October-December and for full-year expansion to top the government target. However, with the euro area in recession and U.S. demand sluggish, the economy faces considerable headwinds in 2013.

"The 7.5 percent economic growth target is achievable, but it cannot be achieved without any difficulties," said a source at a top think-tank. Beijing had maintained a target for economic growth of 8 percent for eight years before cutting it in 2012 to 7.5 percent.

Policymakers believe keeping the 7.5 percent target in 2013 will help balance the need to keep growth humming with the need for economic wiggle room to deepen reforms, said government economists involved in the discussions about the plans.

The government also intends to maintain a 4 percent inflation target and 14 percent limit on M2 money supply, the sources said. They declined to be identified because of the sensitivity of the issue.

The target for fixed-asset investment, or spending in such areas as infrastructure, roads, bridges, and housing, could be raised to around 20 percent from 16 percent in 2012, they said.

A higher target is unlikely to surprise financial markets however, since investment in January-October 2012 was running well ahead of target at more than 20 percent from a year earlier and policymakers earlier this year said they would fast-track investment approvals to underpin growth.

"I am not overly concerned about over investment as long as it is channeled to sectors in need while steering away from resource intensive and inefficient industries," said Connie Tse, an economist at Forecast Pte in Singapore.

A higher pace of investment could also help offset weakness in export demand, which the Organisation for Economic Co-operation and Development highlighted as a major weak spot for the next few years.

The sources said top leaders would also maintain a "prudent" monetary policy in 2013, the catch word since late 2010 that has encapsulated at first modest tightening and then modest loosening following the global financial crisis.

Equally, the new regime will keep to a pro-active fiscal policy, giving room to increase state outlays on infrastructure investment if needed.

Setting a 4 percent inflation ceiling reflects the official view that price pressures could rise from the current rate of 1.7 percent due to the impact of loose monetary policy in the West, especially in the wake of U.S. measures of pump cash into its economy, the sources said.

The exact date of the economic conference is not known.Chinese state-news agency Xinhua usually reveals the date just before the meeting opens and announces details once it is over.It was held between Dec 12-14 last year and Dec 10-12 in 2010.

The government, however, may not announce the targets before the annual parliament meeting in early March 2013.

China's annual economic growth dipped to 7.4 percent in the third quarter, its weakest pace since the first quarter of 2009 when China was reeling from the global financial crisis.

Growth is expected to pick up in the fourth quarter following a raft of measures, including two interest rate cuts this year, reductions in bank reserve requirements and faster approvals for infrastructure projects.

Zhu expects growth to quicken slightly in 2013 to around 8 percent from 7.7 percent this year. But analysts say Beijing will shun big stimulus next year,even though leadership transitions in the past had been marked by big jumps in public investments.

Expectations China might try to give a major boost to the economy when the country's new leaders take office in March have lifted markets on occasions. On Wednesday, mining stocks rose after Xi talked about targeted and effective economic policies.

Beijing is wary of over stimulating the economy though, as it is still dealing with the hangover of its 4 trillion yuan ($642.54 billion) spending binge to boost growth in the global financial crisis that saddled local governments with piles of debt.

In addition, Chinese leaders recognize that three decades of double-digit expansion is over and lower growth rates are needed to allow the economy to adjust more towards domestic driven growth, analysts say.

Both Xi and premier-in-waiting Li Keqiang have signal led an intention to deepen economic changes to underpin longer-term growth, which analysts expect to include such measures as further liberalization of interest rates and the currency and efforts to narrow the rich-poor divide.

Ma Jiantang, head of the National Bureau of Statistics, said that modest economic growth will help economic restructuring as Chinese firms are under pressures to move up the value chain."The current 7-8 percent speed is favorable for structural adjustments. If we really want to adjust economic structures, we cannot have high expectations on growth and should accept the 7-8 percent rate," Ma wrote in a recent article.